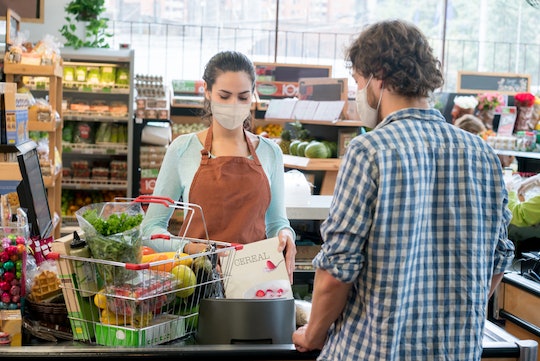 We called them heroes this spring. Let's not yell at them about pumpkin pie now.

More than seven months into the coronavirus pandemic, the outright reverence shown for the essential employees who risked their own health to keep store shelves stocked in those early days has died down. Despite the newness of it all having worn off, being kind to retail employees this holiday season is more important than ever.

At the outset of the pandemic, when workers took on overnight shifts to re-stock toilet paper, they were called heroes. When cashiers donned masks and gloves for the first time to dole out the remaining bags of flour and Lysol wipes, people thanked them relentlessly. Although the initial burst of attention and praise is seemingly over, these workers are still real-life heroes doing the very same things all these months later. Above and beyond that, they're also real people with actual feelings who don't deserve to get yelled at for being out of canned pumpkin two days before Thanksgiving. (It's not their fault that you didn't plan ahead, y'all.)

I am guilty of letting my own emotions get the best of me, especially around the holidays when stress levels are high. When my day has gone awry 87 different ways and all I want to do is buy some dang cinnamon-flavored coffee, it's infuriating when the store shelves haven't been re-stocked with the exact brand of holiday cheer I'm looking for. But — but — that is not in any way shape or form an excuse for me to snap at a retail employee. No matter how bad my day is, letting my frustration bubble over into my dealings with an unsuspecting grocery store clerk just isn't OK.

From behind the computer screen where I do 100% of my work virtually, it's easy to lose sight of just how hard those working out in public have it these days. I don't deal with the general population on a regular basis, but as the wife of a restaurant server, I can say with absolute certainty that people who work in customer service deserve unyielding appreciation.

Throughout the pandemic, those who serve the public have had to make numerous adjustments to their work environments for social distancing, mask-wearing, capacity changes, and more. Grocery store workers are no exception. They're tasked with adapting to ever-changing regulations on top of dealing with the mixed-bag of emotions of each individual who walks through their doors. (While we're chatting, put on your mask so a grocery store employee doesn't have to ask you to do it.)

If I run into the store to pick up a frozen pie crust, I only have to wear a mask for the 10 minutes it takes for me to zip through the aisles. The worker who helps me locate the pie crusts that I can't find because I only shop for them once a year? He's been wearing his mask for an entire eight-hour shift — not an easy feat by any stretch of the imagination. Plus, some dude just yelled at him for not accepting change at the register, even though he has no control over the company's policy due to the coin shortage, and another woman is angry about the frozen turkey sizes. So if it takes him a moment to remember that they moved all of the pie crusts to the freezer on the end full of holiday-themed goodies, I am not going to give him one single ounce of sass.

Preliminary data from September 2020 shows a reported 3.1 million Americans are employed in food and beverage retail stores, according to the United States Bureau of Labor Statistics. At some point in the next few months amid a flurry of holiday prep, you will likely encounter at least one of these workers. They're the ones who load your car with the heavy bags of canned goods so that you can donate to your church's holiday food drive. They scan the labels on 12 cans of pureed pumpkin so that you can make a whole pie for every house on your block. (Even when you "accidentally" end up in the 10 items or less line.) At some point, they may even rearrange a meticulously stacked display of Christmas sweaters in the shape of a nutcracker because your 3-year-old knocks it over.

Above all, they help make sure that the holidays are as seamless as possible for their customers this year — despite the struggles of 2020. Despite the fact that they're tired. Despite that they have also endured the unthinkable during these unprecedented times and missing their families. They show up. So why not show up yourself? Show up with a word of thanks, a smile behind your mask, a moment of graceful patience when they can't answer when there will be more instant gravy in stock, and just some honest-to-goodness kindness.