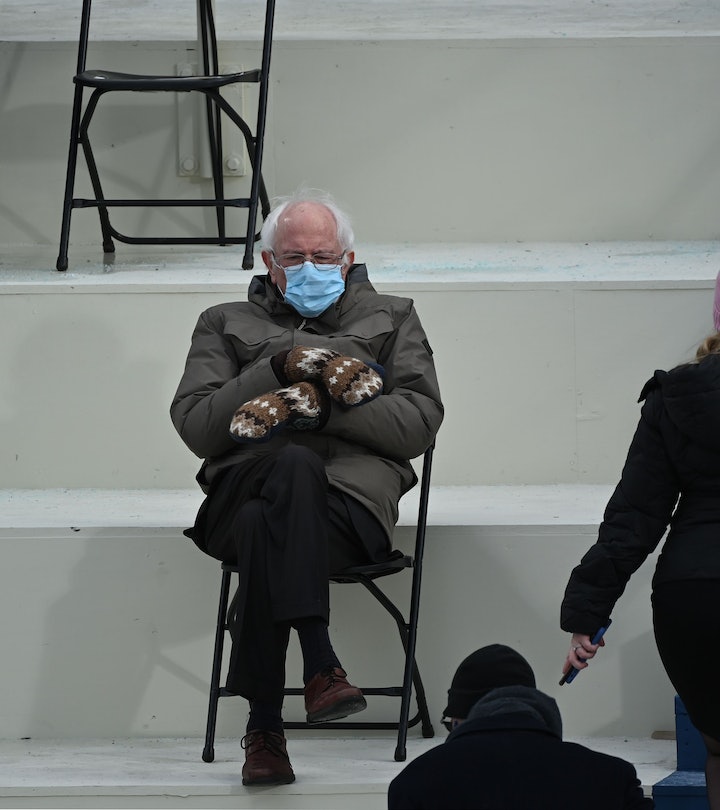 Sitting In His Handmade Mittens, Bernie Sanders Was Everyone’s Grandpa At The Inauguration

"Shout out to Bernie Sanders showing up to the inauguration as if he’s headed to the UPS store and picking up some coffee in Burlington."

Jan. 20, 2021 was a historic day in so many ways. President Joe Biden was sworn in as the oldest person to ever take office. Vice President Kamala Harris was the first woman of color to take the second most powerful position in the country. President Donald Trump finally left the White House for the last time. Everyone looked glamorous in their wool coats and symbolic colors. And there sat beloved Vermont Sen. Bernie Sanders, everyone's grandpa at the 2021 inauguration in mittens and a warm coat because he knows how to party.

Sanders was on hand to watch both Biden and Harris be sworn in, and from the looks of his outfit it was a cold day. Very cold (According to The Weather Channel, it around 42 degrees Fahrenheit). And Sanders, like a true curmudgeonly, sensible grandpa, was not having it. While most of the politicians on hand favored fashionable looks like high-end wool coats, pant suits, and tasteful outfits in symbolic shades of purple to denote national unity like First Lady Michelle Obama and Secretary of State Hillary Clinton, Sanders went a different route.

He wore warm mittens that looked to be knit by hand, a parka, and a regular face mask like those ones you can get at the grocery store. Like a true grandpa living in rural Vermont just running a few errands before stopping in at the inauguration for a free coffee. To complete his look, Sanders parked himself in a folding chair where he sat with his arms and legs crossed, waiting for the show to get going already.

Truly everyone on the internet loved it. Folks took to Twitter to make an instant meme of Sanders and his delightful mittens, with one Twitter user even sharing the sweet story behind them that made them one million times better, "Bernie’s mittens are made by Jen Ellis, a teacher from Essex Junction, Vt. She gave them to him 2+ years ago and was surprised when he began wearing them on the campaign trail. They are made from repurposed wool sweaters and lined with fleece made from recycled plastic bottles." Ellis shared the mittens herself back in 2020.

Some social media users noted Sanders' outfit was appropriate for some other outings and got very specific, like this person who wrote, "Bernie Sanders out here like he just picked up the raffle tickets for church’s Friday fish fry."

Bernie Sanders is giving off raffle ticket energy with his Inauguration Day look.

Or maybe he was just a regular grandpa heading off to the post office as this social media user surmised, "I see everyone mocking Bernie's "grandpa at the post office" vibe today but those mittens are clutch."

Bernie Sanders' outfit was a hit.

Another noted that, as a senator from Vermont, this outfit felt very on brand for Sanders, "Shout out to Bernie Sanders showing up to the inauguration as if he’s headed to the UPS store and picking up some coffee in Burlington."

Bernie Sanders went for function over fashion on Inauguration Day.

Finally, one social media user pointed out that Sanders isn't just a grandpa. He's all of us "when the Zoom could've been a call."

Bernie Sanders at Inauguration Day is the meme for all seasons.

While the rest of us might like to consider him our grandfather, he is actually a loving grandpa in real life to seven grandkids. We can only hope they also own pairs of those trendsetting mittens.

Sanders was not alone in going for function over fashion. Massachusetts Sen. Elizabeth Warren showed up for Inauguration Day in a warm puffy coat with a pink Planned Parenthood scarf, looking like the slightly cooler grandma who is trying to keep current alongside Sanders' disgruntled grandpa. All is slowly becoming right with the world.

More Like This
There's Now A Barbie Doll With Behind-The-Ear Hearing Aids For The First Time Ever
Two Young Children Have Been Hospitalized Because Their Formula Is Out Of Stock
Biden Signs Law Banning Unsafe Infant Sleep Products Attributed To Over 200 Deaths
13 Moving Photos Of Kids, Families, & More Protesting Abortion Rights Across The Country