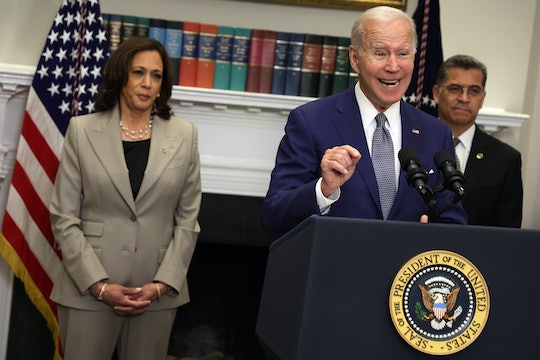 “Health care must be between a patient and their doctor, not a politician.”

It’s been a little over two weeks since the Supreme Court overturned Roe v. Wade, ending Americans’ constitutional right to have an abortion by returning the issue back to the states. The reversal has created a legal patchwork across the country — pregnant patients’ right to choose is now, more than ever, dependent upon where they live. But on Monday, Health and Human Services (HHS) Secretary Xavier Becerra announced clarifying guidance to protect abortion care in emergency settings on a federal level, particularly in the face of unclear state statutes.

“Under the law, no matter where you live, women have the right to emergency care — including abortion care,” Becerra said in a statement. “Today, in no uncertain terms, we are reinforcing that we expect providers to continue offering these services, and that federal law preempts state abortion bans when needed for emergency care.”

HHS, through the Centers for Medicare & Medicaid Services (CMS), asserted their position via their intention to enforce the Emergency Medical Treatment and Active Labor Act (EMTALA), which has been on the books since 1986. In an open letter addressed to health care providers, Becerra highlighted the role of EMTALA’s protection of providers to screen, stabilize, and transfer patients for appropriate care — including abortion care — “irrespective of any state laws or mandates that apply to specific procedures.”

While EMTALA does not reinstitute Roe-era access to abortion services, and applies only to specific clinical settings (generally emergency departments), Becerra cited appropriate treatment of ectopic pregnancy, complications of pregnancy loss, and emergent hypertensive disorders like preeclampsia as protected throughout the country.

Failure to comply with EMTALA could result in a slew of consequences for hospitals and providers, including termination of the hospital or physician's Medicare provider agreement, fines for both hospitals and physicians, and legal recourse for patients in civil court. As a “complaint driven process,” it is up to patients and (legally protected) whistleblowers on staff to file reports via state agencies if they believe EMTALA has been violated.

This announcement comes amid a suite of actions from the Biden administration that seek to federally protect access to abortion care where possible. It complements President Biden’s executive order on reproductive health issued Friday to protect access to medication abortion, patient privacy, and emergency contraception, as well as Attorney General Merrick Garland’s recent statement asserting that mifepristone, an FDA-approved medication used to end first-trimester pregnancy, cannot be banned at the state level.

While some states, like New York, Illinois, and California have expanded access to abortion care since the SCOTUS ruling, others have banned abortion outright, from the moment of conception. While most states that have banned abortion allow for exceptions to save the life of the pregnant patient, the wording of state statues have created some confusion for health care providers and hospital lawyers. An ectopic pregnancy, for example, is never viable and can kill the patient if left untreated, but it is generally not immediately emergent. Must doctors, therefore, wait until the patient is in distress lest they suffer the legal wrath of the state? This announcement urges providers to follow appropriate medical procedure with the assurance of legal protection under federal law.

“Protecting both patients and providers is a top priority, particularly in this moment,” said Becerra. “Health care must be between a patient and their doctor, not a politician. We will continue to leverage all available resources at HHS to make sure women can access the life-saving care they need.”