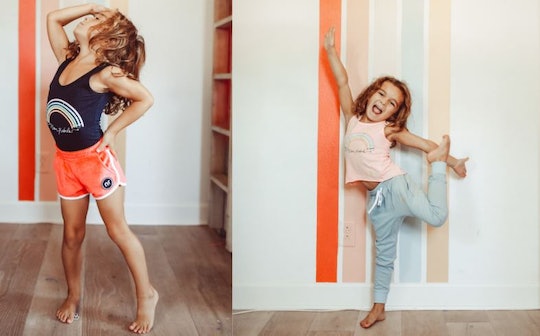 It’s one we could all live by, TBH.

You may recognize Boss Baby Brody for his freestyle dance skills, rond de jambe ballet attitude, or even his cameo in a Niall Horan music video. At 5 years old, Brody Schaffer is a beloved figure on social media for crushing gender stereotypes, dancing his heart away, and simply living as his true self. Wherever you’ve seen him, it’s clear that one motto in the Schaffer household always shines through.

“Always extra, never boring,” Brody’s mom, Dani Schaffer, tells Romper is an “unspoken rule” their family lives by. “We integrate this rule into every aspect of our lives from how we present ourselves to the clothes we wear.”

Although Brody is starting kindergarten, he has millions of followers across TikTok and Instagram. He’s also the face of a new fashion campaign for Neon Rebels, a children’s clothing line that celebrates kids’ individuality and self-expression. “With this campaign, Brody is free to express himself and be himself through his style,” Schaffer says. “Their clothing is pretty gender-neutral, and it’s suited for Brody perfectly.”

Neon Rebels, Maisonette’s newest private label, recently launched online and features colorful shirts, skirts, shorts, dresses, and more. A number of items also feature rainbows, which Brody has incorporated into many of his own outfits and accessories.

Like most kids, Brody likes to get creative with his school outfits and that “always extra, never boring” family mantra extends to the classroom, too. “If letting them wear piles of mismatched pieces or rainbow pieces and tutus makes them happy and excited for school, so be it!” Schaffer says.

Together, with her husband Bobby, the Schaffers have worked to instill values of self-love and individuality within their four children. “Bobby and I have always taught our children to support, respect, and love one another, and to embrace each other’s individuality,” Schaffer shares.

Brody’s love for fashion and dance, for example, came from his sister, Dylan. Schaffer says when he was younger he would dress up in his sister’s dance costumes and scream at Alexa to play his favorite soundtrack from the movie Frozen, which is how he got his Boss Baby nickname. “From the time Brody was able to walk and talk, his mission was to get everyone on the dance floor,” the mom of four recalls.

As an influencer, Brody has been changing the narrative on gender norms since first going viral in 2019 when his mother posted of video of then 4-year-old Brody dancing to The Nutcracker. The video gave him national attention and he was signed to WWE talent agency shortly after.

It’s that authenticity that his mother and millions on social media love. “You don’t see any 5-year-olds trying to be something they’re not — that’s the beauty of kids!” Schaffer says. “They’re real! No masks, no filters…just them, doing their thing, whatever that may be.”

More Like This
Sally Field Is The Ultimate Cool Mom Who Once Tried To Set Her Son Up With An Olympian
Marie Kondo Gives Up Tidying Post-Kids, Sparking Joy For Moms Everywhere
10 Of Julia Louis-Dreyfus' Best Quotes On Motherhood & Raising Her Sons
Lisa Marie Presley’s Daughter Posted A Beautiful Throwback Photo With Her Late Mom
What Parents Are Talking About — Delivered Straight To Your Inbox