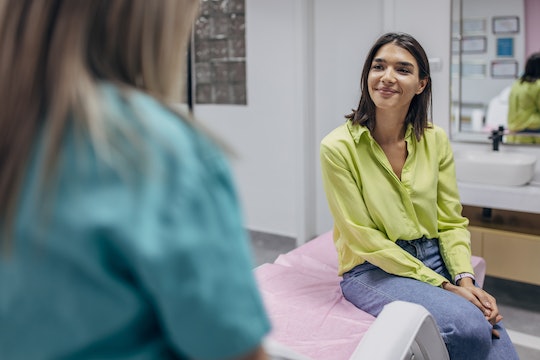 For me, 50 feels like the year I get to do whatever I want. And what I wanted to do was Botox.

You’re not supposed to lie flat after you get Botox, did you know that? Not for the first few hours anyhow. Vigorous exercise is out, too, even though the medical aesthetician couldn’t quite define vigorous. A hike? Maybe doable. Bike ride? If it’s all flat. Definitely not yoga because they don’t want the Botox “migrating to other muscles” and this came as a real surprise to me. That it could migrate to some other muscle.

Almost as much of a surprise as getting Botox in the first place.

Where I live, in a small town with lots of fresh air and waterfalls and people hiking and broken-in Blundstones as far as the eye can see, Botox is not really done. Or it is, I guess, but only by people who, I’m sorry to say, everyone just thinks of as Botox people. “There are young faces and there are old faces and there are Botox faces,” a friend of mine once said. I guess I could see what she meant. The polish, the sheen. Well-groomed, line-free. Careful with themselves. A category that implies all sorts of subtext that I didn’t want to apply to me or I didn’t want other people to apply to me. Vanity of course being at the top of the list. Fear of aging close behind.

The thing is, I don’t know if I’m vain or not. I don’t know how scared I am of aging and I should probably figure this out because I turn 50 next month. Here’s what I’m going to tell you about turning 50 and being a mom with four grown sons: It’s a bigger deal to everyone else. My kids, my friends, my spam email sending me ads for linen tea towels and middle-aged dating and bladder-leak underwear. For me, 50 feels like the year when I get a pass. To do whatever I want.

And suddenly last month, the thing I really wanted to do was Botox. I wanted it even though my circle of people, my bubble, my pod, all said nope. No way. Bad idea. Said “oh come on you’re beautiful!” which was nice to hear but kind of not the point. Reminded me that it would be a slippery slope, that I would get addicted to injecting things into my face, that Botox was a gateway drug that was really about the male gaze and the way women are punished for aging.

I might agree with some of this but also. Also.

For 15 years I raised kids. Every morning for all of those years I would put my hair into a half ponytail, the kind where you don’t even bother pulling your hair all the way through. I would put on leggings and a t-shirt and go into the washroom and brush my teeth with my eyes closed. Brush my hair with my back to the mirror or more often, walking through the kitchen to remind one son to bring his school permission slip, another to clean out his backpack. Slip my feet into sandals or sneakers or boots and go about my day. Invisible to myself only.

It turns out the Botox was for my gaze only. To reclaim something I thought I had lost in all those years of being consumed and swallowed by motherhood.

For 15 years I didn’t look at my own face in the mirror. Because I couldn’t think about my roots that needed color, my eyebrows that needed shaping, my skin that needed better moisturizer. Not today, not now. And all of those todays added up to 15 years, so that when I woke up one morning and looked myself square in the face, it wasn’t my face. I lost all of those years of the face I had, which was regular and probably perfectly fine. This face was fine too, it just wasn’t mine.

And so I did it. After hours of Googling and trying to talk myself out of it, I booked myself an appointment. Told no one. Worried about the cost since it’s apparently against the rules to tell anyone how much it costs, although I will tell you that for me it was $350, paid over four weeks. One thing that I like about this world is you can finance your face. It didn’t hurt. It was quick and easy and here’s some good news/bad news for you: It barely changed me. I look a tiny bit different maybe, not so much that anyone else notices but just enough so that when I get up in the morning to wash my face, I can look myself square in the eye and see me and shrug like, “okay good enough.” I didn’t become a Botox person, not yet. I’m still in track pants all the time and I wish I could tell you that I’m boosting my newly smoother forehead with a good makeup regimen but I’m not.

It turns out the Botox was for my gaze only. To reclaim something I thought I had lost in all those years of being consumed and swallowed by motherhood.

It was nothing much. Just my own face. Exactly how I want it. Average-ish.