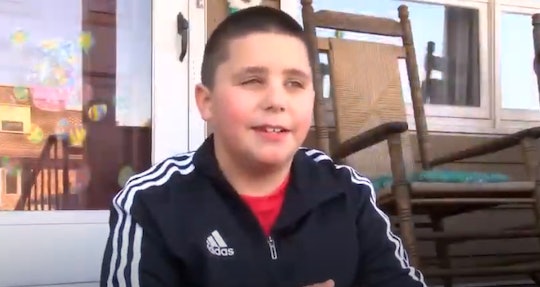 And saved her life.

As his dad was driving, young Jaxson Dempsey noticed something was wrong with his baby sister. She was choking on a chicken nugget. Despite the fact that he was scared that she was in danger, the 8-year-old saved his sister with CPR he had actually learned from John Cena. The former WWE wrestler and actor had been on a Nickelodeon program the second-grader had watched, and fortunately the young boy clearly paid attention.

Last month, 8-year-old Jaxson was in the car with 20-month-old sister Leila and his dad, out to get a haircut and stopping at McDonald’s for some lunch in Hazleton, Pennsylvania. His dad was busy driving when Jaxson noticed something wrong with Leila. She was choking. “It made me feel scared,” he told PAHomepage.com, “because I thought she was going to die. But then, this thing came into my mind.”

Jaxson told his dad to pull over and sprang into action. “I started to pat her back,” he explained, using the heel of his hand between her shoulder blades to clear her airway.

It was a trick he had picked up watching John Cena do the same thing on a show. "It's called The Substitutes on Nickelodeon, and in the very first episode,” Jaxson told WNEP, “John Cena was on it, and in the last part, he showed how to save someone when they're choking.”

An 8-year-old boy saved his sister with CPR learned from John Cena.

Within 30 seconds, Jaxson’s dad Matt Dempsey reports that Leila’s airway was clear. Her big brother had just saved her life. All because he watched John Cena play a substitute teacher focused on educating kids on CPR named Mr. Barnes on The Substitutes.

Jaxson’s actions were especially helpful in this situation as his dad did not hear Leila in distress, “I couldn't hear her because… she wasn't coughing, she wasn't panicking," he told WNEP. "She just had no air going through. She wasn't breathing. Thank god Jaxson was there because without him, I don't know if Leila would be here."

The importance of learning CPR at any age cannot be overstated, and as Jaxson’s experience with his sister makes clear, it can be taught fairly simply. In 2019, an EMT dad went viral for teaching his 2-year-old daughter CPR using the “Baby Shark” song in time with life-saving chest compressions.

Jaxson was treated to a parade in his hometown for his heroism. And he knows exactly who to thank for it. "I would say thank you [to John Cena] for being on that show," he told WYOU. "It taught me a lot about how to save someone's life."