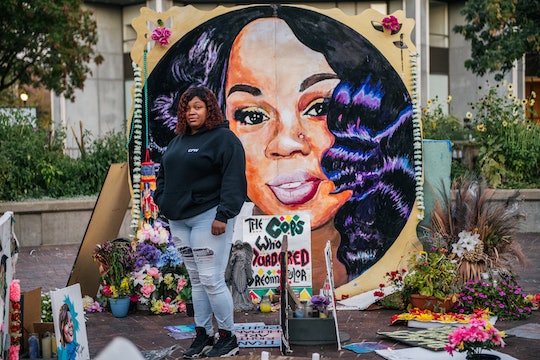 Ahead of the one-year anniversary of her death on March 13, Breonna Taylor’s mom reminded us she has still not seen justice for her daughter. “I don’t think there’s been justice at all... It’s still unbelievable,” Tamika Palmer said in an interview with CNN.

Taylor was a 26-year-old EMT living in Louisville, Kentucky when she was shot in her apartment in the middle of the night on March 13, 2020. Officers in plain clothes had entered her apartment with a “no knock” warrant as part of a narcotics investigation; Taylor was shot and killed after her boyfriend, Kenneth Walker, fired at the officers with a licensed gun.

In the year since Taylor’s death, the FBI opened an investigation into the circumstances of the shooting and three of the officers involved were put on administrative leave with one, Brett Hankison, losing his badge, the BBC reported. Months later, two officers connected to the shooting that claimed Taylor’s life were fired in January, according to NPR. But no officer has been charged for her death.

Palmer told CNN she is feeling “anger” over this issue on the anniversary of her daughter’s death. “Anger that it was so avoidable, anger that she lost her life for it,” she said. When asked what justice for Taylor would mean to her, Palmer responded, “to have these officers arrested and charged and convicted.”

Tamika Palmer still seeking justice for her daughter one year after her death.

Palmer has been fighting tirelessly for justice for her daughter. She filed a wrongful death lawsuit two months after her death against the city of Louisville, citing battery, wrongful death, excessive force, negligence and gross negligence, which was settled in September for $12 million, The New York Times reported. “Justice for Breonna means that we will continue to save lives in her honor,” Palmer said in a statement at the time. “No amount of money accomplishes that, but the police reform measures that we were able to get passed as a part of this settlement mean so much more to my family, our community, and to Breonna's legacy.”

For Palmer, a mother who remembers her daughter as a woman who wanted to be a nurse and had “her head on straight,” as she told The Louisville Courier-Journal last June, she honors Breonna Taylor every day.