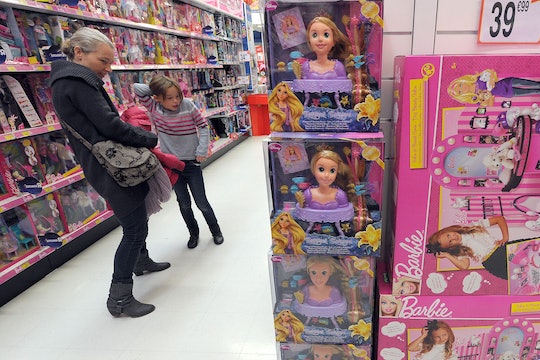 The law was inspired by a question raised by an 8-year-old girl.

Large retail stores in California will have to revamp their displays of children’s toys thanks to new legislation signed into law over the weekend by Gov. Gavin Newsom. Under the law, which was reportedly inspired by an 8-year-old girl, retail department stores must create gender-neutral sections or areas that are filled with an adequate selection of children’s items and toys. Stores that refuse to comply with the law will be fined up to $500.

Assembly Bill 1084 directs any retail department store that sells children’s items and employs more than 500 workers across all of its California locations to establish and maintain a gender-neutral section to display children’s items and toys by Jan. 1, 2024. According to the law, these sections must be stocked with “a reasonable selection” of the retailer’s children’s toys and items, regardless of whether those toys are traditionally marketed as being for just boys or just girls.

California State Assemblyperson Evan Low, the legislator behind the new law, said it was a question from a then-8-year-old girl that ultimately motivated him to draft the bill. “I was inspired to introduce this bill after 8-year-old Britten asked, ‘Why should a store tell me what a girl’s shirt or toy is?’” Low said when introducing an earlier version of the bill in February 2020.

In comments to the Sacramento Bee, Low later explained Britten had been confused as to why she only ever found science-related toys in what stores labeled and referred to as being the “boys” section. “That was the impetus of this, which is how do we make a safe space today for children in society,” he told the paper.

When introducing an earlier version of the bill, which was reportedly pulled as California’s State Legislature pivoted to focus and prioritize the COVID-19 pandemic, last year Low claimed it would “help children express themselves freely and without bias.”

“We need to let kids be kids,” he said at the time.

Critics of the law, however, have characterized it as an example of government overreach. “I don’t think parents need the government to step in and tell them how they should shop for their children,” State Sen. Melissa Melendez, who voted against the bill’s passage, told the Associated Press. “Let parents be parents.”

Of course, some national retailers and children’s brands have already made efforts to create more gender-neutral children’s departments. In 2015, Target announced it was moving away from gendered signage and gendered colors in areas like kids’ bedding and toys. More recently, Lego vowed to remove all gender bias and harmful gender stereotypes from its products and marketing.

“The benefits of creative play such as building confidence, creativity, and communication skills are felt by all children and yet we still experience age-old stereotypes that label activities as only being suitable for one specific gender,” Julia Goldin, LEGO Group’s CMO, said in a statement released by the company earlier this week. “At the LEGO Group, we know we have a role to play in putting this right,

Stores that fail to comply with California’s new law by Jan. 1, 2024, will face an initial fine of up to $250 followed by a fine of $500 for any subsequent violation.

This article was originally published on March 9, 2021