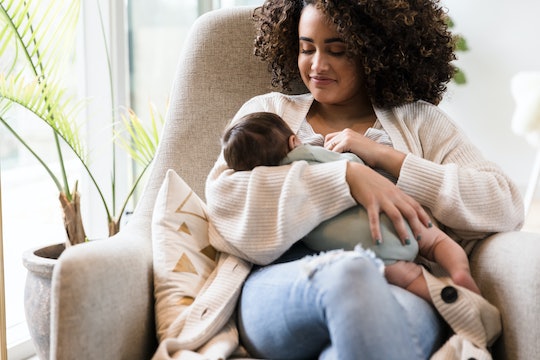 What You Need To Know About Breastfeeding & Irregular Periods

Experts explain why your cycle can be a little wonky.

As someone with PCOS, irregular periods were not new to me when I started tracking my cycle to conceive. That’s why it took more than two years to get pregnant in the first place. So to me, an added perk of pregnancy was that I wouldn’t have to worry about random periods (or timing intercourse) for nine whole months and I’d get a baby at the end of it. I planned on breastfeeding as well, and I’d heard from the internet (and my well-meaning aunts and my mom) that if you’re breastfeeding, you won’t start your period until you’re done.

So imagine how pissed off I was when one month after having my son, I had a few irregular periods. Granted, I was exclusively pumping, but I thought I’d have at least one personal benefit to pumping breast milk 24/7. The promise of no periods.

Can Breastfeeding Cause Irregular Periods?

Some women do experience irregular menstrual cycles after breastfeeding as a response to hormone transition, says Sarah Schooler, an international board-certified lactation consultant. And that hormone is prolactin, which is what helps you make milk, according to Health Direct.

“When a breastfeeding woman’s menstrual cycle returns vary so greatly from woman to woman, but are most strongly correlated with her reaction to breastfeeding hormones and how frequently her baby is nursing,” Schooler explains. “On average, a woman’s cycle returns at 14 to 15 months postpartum, but a woman’s period has a greater chance of returning sooner if her frequency of breastfeeding decreases.”

She says that for many women, the first few cycles after the return of their period occur without ovulation as the body transitions back to full fertility. “Generally, the earlier your menstrual cycle returns the more likely the return to full fertility is more gradual.”

Healthline also reported that it’s completely normal to have inconsistent cycles while you’re nursing, and you can blame it on the same hormones that causes missed periods.

Can You Get Pregnant While Breastfeeding?

One of the many, many, pieces of unsolicited advice I received when I became a new mom was that I didn’t have to worry about getting pregnant again while I was breastfeeding. “Your body knows it’s not going to be able to handle another baby right now, because you’re producing milk for one brand new life already, so your period won’t come,” is a popular tale people would tell me. To say I was dubious about their reasoning is an understatement, but there was some sort of truth in there.

According to Ashley Georgakopoulos, IBCLC and Motif medical lactation director, breastfeeding does prevent pregnancy, but there’s a catch — only in the first four months, and only if exclusively breastfeeding at the breast. “If supplementing, pumping in place of feeding directly — not talking about in addition to — or if menses has returned any time in the time period, it can no longer be relied upon as a contraceptive,” she says. This explains why I started my period again — I was exclusively pumping.

“After 6 months, or if your period returns, the risk of pregnancy slowly increases. Remember that you will ovulate first and then have a period 2 weeks later if you are not pregnant. So that is how you can become pregnant with no period at all,” says Dr. Cynthia Flynn, OB-GYN for JustAnswer.

When Will Your Period Go Back To Normal While Breastfeeding?

Other Causes Of Irregular Periods Postpartum

“Other causes of irregular periods include thyroid disease, PCOS, stress and weight gain to name a few,” says Flynn. “It is normal for your periods to be irregular for a few months when they return. If they remain irregular, you should talk to your gynecologist about some screening blood work. In addition, if your periods were irregular prior to pregnancy, they will likely be so after as well.”