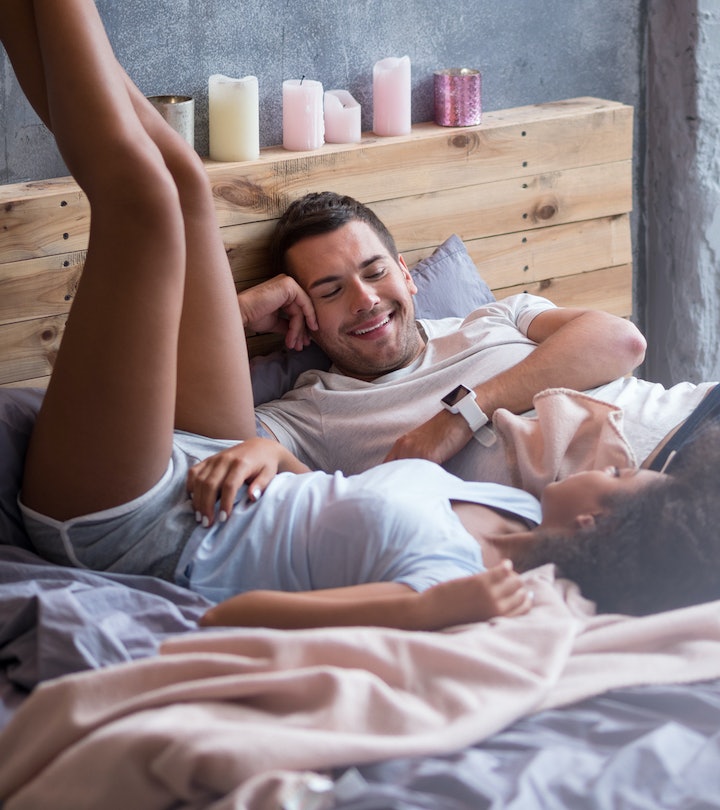 ~Technically~ You Can Get Pregnant By Being Fingered, But There's A Lot To Consider

If you're over the age of 13, you should know by now that you can get pregnant through vaginal penetration by a penis, also known as P-in-V sex, as the kids are apparently saying these days. But what about other ways? As long as sperm is involved around the general vicinity of your vagina, can you get pregnant? Can you get pregnant by getting fingered? It seems like an obvious answer, but you may be surprised.

According to Dr. Adrienne Zertuche, an OB-GYN at a division of Atlanta Women’s Healthcare Specialists, “While it is unlikely for you to get pregnant simply by engaging in non-generative sexual activity (i.e. ‘outercourse’), it is still possible.” Mainly if your partner has semen on his finger from pre-ejaculate, or if he “pulled out” and there was still pre-ejaculate or any sperm at all left inside of you and he uses his finger and pushes the sperm further up in — these are the only two scenarios where fingering could lead to pregnancy. “It only takes one sperm to get pregnant. Therefore, a sexual act that involves pre-ejaculate could lead to pregnancy,” she explains to Romper in an email interview.

What exactly is pre-ejaculation anyway? According to the American Pregnancy Association (APA), it’s exactly what it sounds like: The fluid that seeps out of the penis before your partner ejaculates. “This fluid is released from the Cowper’s gland, located at the top of the urethra. The purpose of this fluid is to reduce the acidity in the urethra and provide a lubricant for the sperm that is released once ejaculation occurs. Most men have no control over it and cannot feel it coming out,” the APA noted.

The APA also mentioned that there are conflicting schools of thought as to whether or not there is sperm in the pre-ejaculate. However, “it is possible for small amounts of sperm to exit [his] reproductive system and make its way into the pre-cum or pre-ejaculate." So though very rare and uncommon, it is technically possible according to the APA.

Confused by that old stand-by that oxygen kills sperm? Well apparently, oxygen doesn’t immediately kill sperm — it has to dry first, the APA noted. “Once sperm is dry, it is dead and cannot travel to fertilize an egg. Sperm can live for three to five days if it is in a warm, moist environment such as the vagina or uterus of a woman, [but] sperm cannot come back to life once it has dried, even if it is re-moistened,” according to the APA. However, as far as how long sperm can live outside of a warm moist environment, Zertuche isn’t sure.

Trying not to get pregnant and want to be 100 percent sure no sperm enters the vaginal zone? Other than abstinence, there’s really only one way to ensure your vaginal area is sperm-free — contraception at all times. “If you are trying to avoid pregnancy, in addition to using condoms, you should utilize an effective method of contraception. Ask your gynecologist if you are a good candidate for the contraceptive implant (Nexplanon), an intrauterine device (IUD, e.g., Mirena, Paragard), a contraceptive injection (Depo-Provera), or a birth control pill, patch, or ring,” Zertuche says. If you are trying to get pregnant and hope beyond hope that you could possibly still be pregnant, even if he just fingered you, it’s highly unlikely, but it could potentially happen.

Obviously it’s not just by the finger alone that you get pregnant from. If the stars align, and your partner somehow gets his finger in there before sperm on his finger has dried, you can potentially get pregnant. So in addition to keeping you from getting infections down there, make sure his hands are squeaky clean before any finger action happens to be 100 percent safe.