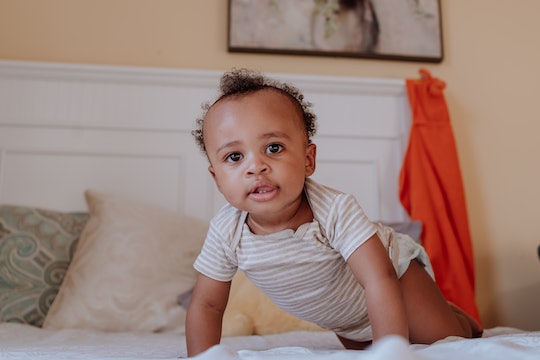 If you think your baby is professional-level cute, listen up. Carter’s has a new Baby of the Month program you can join, and if your baby gets chosen as Baby of the Month, you could win prizes, gift cards, and marketing fame for your little cutie.

What comes with that coveted title, you ask? Well, a $500 gift card for one thing, plus the chance to appear in Carter’s marketing. Winners will be chosen at the end of every month, and Carter’s noted in a press release that the company “will carefully review each submission to honor sweet babies that standout for their special personalities and stories.”

Perhaps best of all, the program will all end in December with one baby being named Baby of the Year. No, they won’t be given a tiara and a cape and be expected to give a speech about world peace — it’s even better. They will receive an exclusive photo shoot and a lifetime supply of Carter’s. All of the winners will be inducted into the first class of Carter’s Futurists, and the company really wants to hear from a diverse cross-section of babies as well. “From NICU warriors to sassy siblings,” the press release notes, “every little love has an exceptional story.”

Well, every little love who lives in the United States, where the contest is being held.

Carter’s is offering “bonus points” to babies with style, “whether it’s an easy-styling set, a sweet slogan bodysuit or something else.”

This isn’t the first time Carter’s has launched an ambitious social media campaign. In May 2020, the company launched a virtual baby shower contest to be hosted by none other than Kelly Clarkson, and in October 2020 they offered customers a free customized Santa Cam video gram.

This Baby of the Month program is different, though. If your baby won Baby of the Year, they could star in their own photo shoot, and get access to a lifetime supply of Carter’s goods. And maybe even a sash. But you might have to make that part yourself.

Editor’s note: This piece has been updated from its original version to reflect the brand’s updated prize details.

This article was originally published on Jan. 21, 2022