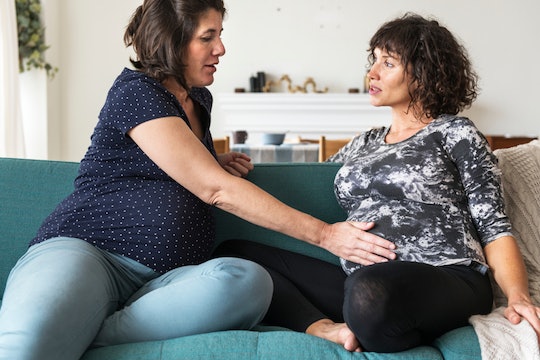 I am a mom with an autoimmune disease and a chronic pain condition. When I got pregnant, my occasional nausea turned into a case of raging hyperemesis gravidarum, and the thought of CBD oil during pregnancy as treatment sounded too good to be true. I would have done just about anything to have eased the symptoms during those long nine months, and more than ever, moms like me are turning to CBD oil during their pregnancy to treat pain, anxiety, and morning sickness. But is that safe?

It's important to note that there's a difference between CBD oil, also known as cannabidiol, and marijuana products that can get you "high." That's because while CBD is an extract from the marijuana plant, it's molecularly different from tetrahydrocannabinol (THC, the psychoactive cannabinoid in marijuana), as an article on Medium explained. That tiny change in the structure of the cannabinoid makes a huge difference in how it works and affects the body. These cannabinoids affect the body by miming the endocannabinoids which play a crucial role in both brain and bodily functions that help maintain homeostasis. The endocannabinoid system (ECS) also plays a fundamental role in the development of the fetus during pregnancy, according to the Journal of Neuroendocrinology.

Therefore, you can see why it is incredibly important to examine all of the available literature before you even consider using CBD oil during your pregnancy. Unfortunately, there is not a wide breadth of research available, as it is a recently popular phenomenon.

And the experts are not of a consensus on this one. Obstetrician Dr. Angela Jones tells Romper, “Regarding CBD oils in pregnancy, I’m reluctant to endorse anything with limited research; hence, until further notice, I can’t endorse or recommend their use.”

And pharmacist Alam Hallan RPh, CDE and the Director of Pharmacy at Guelph General Hospital agrees. He says, “While marijuana usage, especially smoking marijuana, has a lot more evidence to show harm such as lower birth weight and premature births, it makes it easier to conclude that any CBD product that has a significant amount of THC (the psychoactive chemical in marijuana) may not be safe for pregnancy.” However, he notes that “where it gets tricky is CBD products without THC, as it is still a relatively evidence-free zone.” Because people use CBD products “to either reduce anxiety, control nausea, or pain. While there are experts who support the use of CBD products in pregnancy, the general consensus is to stay away from these products due to lack of conclusive human studies.”

Most of the studies surrounding cannabinoids and pregnancy have to do with either marijuana as a whole, or THC as the primary cannabinoid of interest. For years, it was assumed that because this is the compound that altered someone's mental state that it would be the most useful in medical preparations. It was not until recently, when natural health practitioners began preparing and selling CBD oil for use, that it started gaining any traction in the scientific literature.

Pharmalogical Reviews noted that the endocannabinoid system in humans is prone to flaws, and that the use of phytocannabinoids shows "promise in a wide range of disparate diseases and pathological conditions, ranging from mood and anxiety disorders, movement disorders such as Parkinson’s and Huntington’s disease, neuropathic pain, multiple sclerosis and spinal cord injury, to cancer, atherosclerosis, myocardial infarction, stroke, hypertension, glaucoma, obesity/metabolic syndrome, and osteoporosis." However, this meta-analysis of the data available also noted that because the ECS is so crucial in the development of the fetus, that it might cause unforeseen complications like ectopic pregnancies (citing a study in mice that showed that "mice were reported to have impaired oviductal transport of embryos"). That means the fertilized embryos were not being moved to the uterus, and stayed in the fallopian tube.

That's not to say there aren't any studies available outside of the mouse population that looked at CBD oil or marijuana use during pregnancy. There are indeed. And some of them are pretty promising when considering potential future treatments of chronic and acute conditions during pregnancy, especially one published in the journal Obstetrics & Gynecology which found that maternal marijuana use is not independently associated with "adverse neonatal outcomes." Dr. Stuart Titus, Ph.D., a leading researcher in the field and the president of Medical Marijuana, Inc., told Romper in a previous interview that "CBD is a molecule that helps with neurogenesis, the development of healthy brain cells," and that he's observed pregnant women thrive on cannabinoid-rich diets (and go on to deliver healthy babies).

However, because there hasn't been an in-depth, longitudinal study on the effects of CBD oil on the ECS and neonatal development, most OB-GYNs will tell you to steer clear of the homeopathic treatment.

This is partly because doctors can't guarantee the safety of individual CBD products the way they can with other over-the-counter or prescription meds. As Dr. Talitha L. Bruney, medical director for the Comprehensive Family Care Center, Department of Obstetrics & Gynecology and Women’s Health at the Montefiore Health System, explained to Brit+Co, “There are no regulations on what dosage is appropriate or what form of delivery is appropriate" when it comes to CBD. Plus, "there are no standardized formulations. Because none of that exists, people just get it in different forms and doses.” And that is a fundamentally dangerous thing to do, which is why the American College of Obstetrics and Gynecology noted in their annual meeting that providers should warn patients against its use. Think about it: Just about anybody can sell anything and call it "CBD oil," but who knows what you're getting in that bottle?

In the end, you're going to make these decisions on your own, and I understand your desperation for relief. But until science catches up, talk to your doctor or another trusted health professional about the pros and cons for you (and make sure that you do your research about brands before buying).

Fride, E. (2008) Multiple roles for the endocannabinoid system during the earliest stages of life: pre- and postnatal development. Journal of Neuroendcrinology, https://www.ncbi.nlm.nih.gov/pubmed/18426504.

More Like This
Yes, It’s Possible To Get Pregnant If You Have An IUD
7 Things Pregnancy Dreams Can Mean If You're Not Pregnant
You'll Feel Like A Princess In These Gorgeous New Year's Eve Maternity Dresses
Here’s What It Means If You Give Birth During A Solar Eclipse

This article was originally published on Jan. 1, 2019