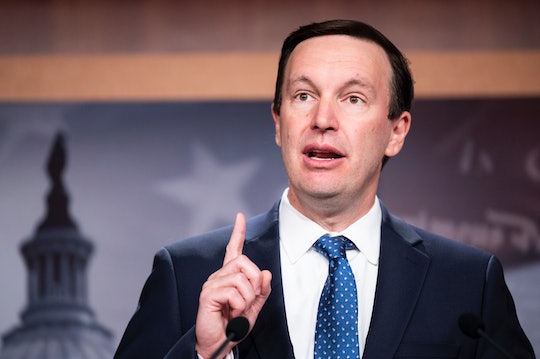 “Nowhere else do little kids go to school thinking they might be shot that day.”

Democratic Sen. Chris Murphy spoke on the Senate floor on Tuesday after the horrific mass shooting at an elementary school in Uvalde, Texas left 19 children and two adults dead. In an impassioned plea that clearly left him struggling to keep his composure, the Connecticut senator asked his fellow senators, “What are we doing?” as he begged for real action to prevent future gun violence.

A lone gunman walked into Robb Elementary School in Uvalde, a small town 80 miles west of San Antonio, Texas, and killed 19 students and two teachers, per the Texas Department of Public Safety, before law enforcement fatally shot him. This senseless attack comes just days after a mass shooting at a supermarket in Buffalo, New York, which is being investigated as a racially motivated hate crime, left 10 dead and three wounded.

Sen. Murphy reminded his colleagues of this shooting in Buffalo before saying, “We have another Sandy Hook on our hands. What are we doing? There are more mass shootings than days in the year.” Murphy represents the Connecticut district that includes the town that saw 20 first-graders and six adults killed in 2012 by a lone gunman.

“This isn’t inevitable, these kids weren’t unlucky,” the father of two continued. “This only happens in this country and nowhere else. Nowhere else do little kids go to school thinking they might be shot that day. Nowhere else do parents have to talk to their kids, as I have had to do, about why they got locked into a bathroom and told to be quiet for five minutes in case a bad man enters the building. Nowhere else does that happen except the United States of America. It is a choice. It is our choice to let it continue.”

Murphy told senators that the young survivors of the Sandy Hook shooting were given a “safe word” to use after the massacre if they started to “get thoughts in their brain about what they saw that day.” One of those safe words was “monkey,” he explained. “And over and over and over through the day, kids would stand up and say ‘monkey,’” at which point their teacher would try to help them talk through their trauma.

Murphy concluded his speech by begging his colleagues “literally on my hands on knees” to pass new legislation so that “at least by doing something, we stop sending this quiet message of endorsement to these killers whose brains are breaking.”

Murphy reached out to GOP senators to work with him and fellow Democrats, but didn’t mince words when speaking to reporters about the oft-repeated GOP response to mass shootings focused on mental health rather than gun control. “Spare me the bullsh*t about mental illness,” he said, per Politico. “We’re not an outlier on mental illness, we’re an outlier on access to firearms.”