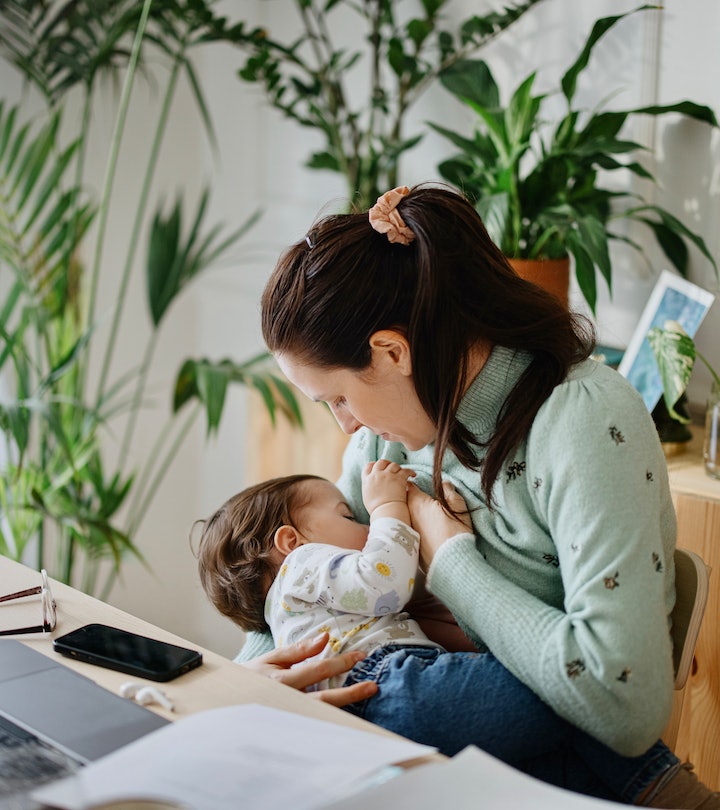 Everything You Need To Know About Clogged Milk Duct Popping

Even if your boobs are at their breaking point, don’t try this yourself.

Chances are, if you have ever breastfed for any length of time (or tried to stop your body’s milk production), you’ve experienced the great displeasure of having a clogged milk duct. They can cause hard, hot, painful knots in your breast, and you know what no postpartum mother needs in her life? That. So, chances are you’re ready to try anything for some relief. And while it’s super tempting, popping a clogged milk duct should not be the first thing you try.

What Causes A Clogged Milk Duct?

Milk ducts are thin tubes that connect the milk-making areas of the breasts to the nipple, and they’re really narrow. Sometimes they can get squeezed from the outside and make it difficult for milk to flow through.

“A clogged duct is an accumulation of milk solids due to infrequent or insufficient milk removal or drainage,” says Melissa Bedward, RNC-OB, IBCLC, an OB-GYN quality improvement specialist and former postpartum nurse and lactation specialist at North Shore University Hospital, in an interview with Romper. “It can also be caused by compression with a tight bra, underwire, or some other pressure on the breast, like a bag strap.”

She adds that the body sends more blood to the breasts early in lactation, so clogged ducts can come on as you start your breastfeeding journey. They can also reemerge as your baby begins sleeping through the night or you return to work and change your breastfeeding or pumping schedule.

Some people confuse a clogged milk duct with a milk blister, or bleb, which Bedward explains as a a whitehead at one (or sometimes several) pores around the nipple that results from a clogged duct.

Is It Safe To Pop A Clogged Milk Duct With A Needle?

If you’re talking about a clogged duct, which happens deep inside the breast, definitely don’t go poking around with a needle trying to get relief. If you’re thinking of popping a milk blister, experts wish you’d leave that to them as well.

“The simple answer is no,” said Crotzer. “Mothers shouldn’t pop a milk bleb at home. If a doctor does it, they’re going to clean the area thoroughly and use a sterile needle, and do it in such a way that it minimizes scar tissue. Infection and scar tissue make it more likely the bleb will return, probably worse than it was before. It could also be that it’s a sucking blister, or a herpetic ulcer, so we recommend being seen if you have a blister on the nipple.”

Bedward said the best way to dislodge a clog is to apply a warm compress before you breastfeed, pump, or hand express, and then gently massage the hard area while you feed or pump. Crotzer also recommends adding heat to the area for five minutes before breastfeeding, but otherwise, stick to ice.

“Think about treating your breast like a sprained ankle, which I know sounds weird, but we want to decrease the swelling,” she said. “Ice and ibuprofen make a much bigger impact on clogs than massage. Moms tend to panic and push really hard on the area to force milk through, but this can break capillaries, cause more inflammation, and make the problem worse. Don’t panic — most clogs are relieved within a few hours or a few feedings with these strategies.”

If you’ve tried these techniques and the clog won’t go away after 24 hours, or you begin to feel unwell, it’s time to call your doctor. Mastitis, an inflammation of breast tissue, can be caused by a clogged duct and lead to infection.

“A plugged duct can develop into a larger blocked off area, which, if left untreated, can turn into mastitis,” says Lisa Hays, RN, lactation consultant at Baptist Health, in an interview with Romper. “Symptoms may include localized soreness, swelling, lumpiness or slight pain.”

“You can always call your OB if you’re concerned, but you should definitely call if you’re experiencing fever, malaise, or if you feel like you have a red, thickened, hot area of skin on the breast,” Crotzer said.

What To Expect When You Get A Milk Blister Popped

Getting a milk blister popped, as Crotzer described, should just require a quick poke with a needle to give the backed-up milk a place to escape. The doctor will sanitize your nipple and the surrounding skin, poke the blister, and clean the area again after it has drained. A thick milk substance may come out of a clogged milk duct, followed by regular milk that has been trapped behind it.

When you unblock a clogged duct, either with ice, massage, or heat, it probably won’t look as solid as it felt. As Crotzer explains, generally tissue swelling caused the blockage rather than something stuck inside the duct.

“If you have a clogged duct and it releases, it has a spraying component because it had that build up of pressure. Think of it like pricking a water balloon,” she says. “I’ve heard sometimes people will have stringy, thickened milk come out, but oftentimes if you’re breastfeeding, you won’t even know that happened.”

If you do have a stringy clog situation and it happens to come out while breastfeeding or pumping, don’t panic about keeping it away from your baby.

“The ‘lump’ may come out as stringy milk or a hardened blob. This is not harmful to the baby to consume,” says Bedward.

More Like This
Reddit Is Stunned By Mother-In-Law Trying To Breastfeed Her Granddaughter
This Underwear-Clad Mom Saved Her Pet Goose From An Eagle While Breastfeeding
Ashley Graham On The “Fun, Organized Chaos” Of Raising Twins
Why Is My Vaginal Area Dark?