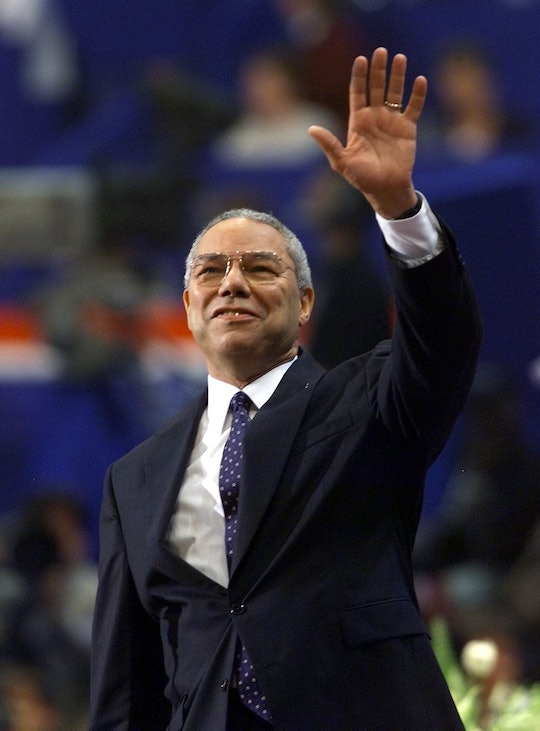 Gen. Colin Powell has died at the age of 84.

General Colin Powell, the first Black U.S. secretary of state, has died at the age of 84 from Covid-19 complications, according to his family. Following his passing on Monday morning at the Walter Reed National Medical Center, his family released touching statement on his Facebook, remembering Powell as a loving family man.

“General Colin L. Powell, former U.S. Secretary of State and Chairman of the Joint Chiefs of Staff, passed away this morning due to complications from Covid 19,” the statement released on Facebook read. “He was fully vaccinated. We want to thank the medical staff at Walter Reed National Medical Center for their caring treatment.”

“We have lost a remarkable and loving husband, father, grandfather and a great American,” the Powell family’s statement concluded.

Powell's longtime chief of staff, Peggy Cifrino, told CNN that Powell also had multiple myeloma, a cancer of plasma cells that suppresses the body's immune response, as well as Parkinson's disease. The U.S. Centers for Disease Control and Prevention (CDC) has long confirmed that those who are immunocompromised, whether fully vaccinated or not, are highly at risk to get the virus.

He’s survived by his three children, Linda, Annemarie, and Michael; two grandchildren; Jeffrey and Bryan, and his wife, Alma, who also had complications from Covid. But according to CBS News, the 83-year-old has been responding well to treatment.

On Monday, Powell’s daughter, Linda, 55, posted a throwback picture of her, her father, and their family as children on her Instagram. “This was us,” Linda, who is an actress and best known for her roles in Madam Secretary and House of Cards, captioned the photo. “My family thanks you for all your thoughts and prayers.”

Powell’s son Michael, 58, is the current president of the trade association the National Cable & Telecommunications Association and not much is known about their sister, Annemarie. Their mother, Alma, reportedly met Powell on a blind date in 1962 and married that same year.

“Without exception, Colin is the calmest person I know,” Mrs. Powell said about her husband in a 1991 interview published by the Chicago Tribune. “He gives me calm. He’s a man of few words. He’s not going to sit down and tell you his ideas and philosophy.”

Beyond his family, Powell was monumental in the political world and public service. Throughout his career, he served under four presidents — Ronald Reagan, George Bush, Bill Clinton, and George W. Bush. He became the first Black national security adviser during the end of Reagan’s presidency and, in 1989, was selected by then-President George H. W. Bush to be the youngest and first African American 12th chairman of the joint chiefs of staff.

As a veteran, Powell served in Vietnam for two tours and received the Soldier’s Medal for rescuing fellow soldiers from a burning helicopter, according to the Wall Street Journal.

“Colin embodied the highest ideals of both warrior and diplomat," Biden said. But above all, the president said that Powell was a friend. “Easy to share a laugh with,” Biden added. “A trusted confidant in good and hard times. He could drive his Corvette Stingray like nobody’s business — something I learned firsthand on the racetrack when I was Vice President.”

More Like This
New York Can End Religious Exemptions to Vaccine Mandates, Says A Federal Appeals Court
Breonna Taylor's Mom Spoke Out About The Four Officers Arrested In Her Daughter’s Death
Dr. Jill Biden Just Delivered Some Frank, But Powerful, Advice On Motherhood
Georgia Says A Fetus Is A Dependent For Tax Returns At 6 Weeks