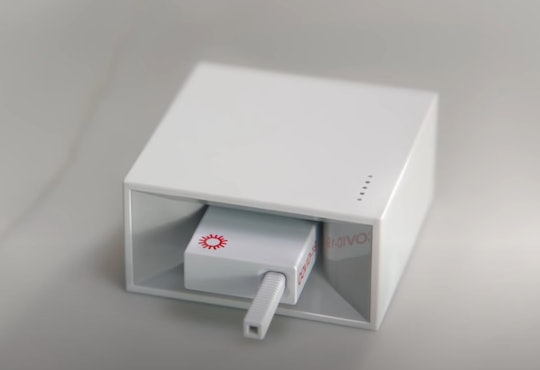 So, That Covid Test Kit You Saw In The Super Bowl Commercial Is REAL Pricey

The device boasts higher accuracy than most at-home tests, but don’t expect to see one in every home any time soon...

For some, watching the Super Bowl is less about football than about the famously over-the-top, hilarious, touching, and/or celebrity-laden commercials. One that has already gotten people talking is the commercial for Cue, the at-home Covid-19 test kit featuring Gal Gadot as the voice of the “Cue” device. What is this new contraption? Does Cue really work? Is Cue available for purchase? If so, how much is it? Here’s what you need to know.

It is composed of a reader and single use cartridges and wands. Users place the cartridge in the reader, swab their nose as they would with a traditional at-home test, and then put the wand in the cartridge. In 20 minutes, a result will be sent via the Cue Health app right to the user’s phone or other digital device. An independent study by the Mayo Clinic found that Cue tests were more than 97% accurate when compared to a molecular lab test. According to reporting from the New York Times, most home rapid antigen tests (aka the kind of home test you’ve probably administered on yourself), are about 85% accurate overall, though data from the CDC suggests this number could be lower in real-world use.

According to the company’s website, Cue was certified by the FDA’s Emergency Use Authorization for professional use such as community health clinics, doctor’s offices, nursing homes, and correctional facilities — in June 2020 and for commercial use in homes and other non-clinical settings since March 2021. This is particularly useful for rural communities, tribal nations — where access to laboratories might be limited — and large corporate and governmental agency offices.

The cost will be prohibitively expensive for most families

The reason the Cue is so much more expensive that typical at-home rapid antigen tests (which usually cost between $13 and $30) is that Cue is a completely different test: a molecular test, which detects genetic material of Covid (RNA) whereas antigen tests detect (you guessed it) antigens. “Molecular tests are the most sensitive, or “gold standard,” diagnostic tests for COVID-19,” the company writes on its FAQs page. “Antigen tests are generally less sensitive than molecular tests, and give more false negative results, especially in people who are asymptomatic.”

A membership is available for an additional fee

Membership comes in two varieties — Cue+ Essential for $39.99 a month and Cue+ Complete for $74.99 a month. Both entitle members to Covid tests (10 for Essential, 20 for Complete), 24/7 virtual care via the app, a 20% discount off additional tests, and $100 off the Cue reader. Complete has the added benefit of providing CDC-compliant supervised tests for travel, school, or work.

Social media has had mixed opinions

As with anything having to do with Covid in general, reaction to the Cue has been mixed. Most commentary seems to be discussion of the cost of Cue.

“An at home Covid test smart device called CUE advertised during the Super Bowl costs $250 for device and $195 for three single use tests. Just your normal horrors of capitalism,” writes Twitter user @where_is_gary.

“If you just saw the Cue Health COVID-19 testing commercial…lol,” tweets @TommyGarrettPFN. “It’s also either $40 or $75 a month on membership. This is the cost of refills. I’ll stay broke, I’m good.”

Others were skeptical the Cue would even work.

“This Cue Covid test thing feels very Theranos-like,” tweeted @BenBrownPL, referencing Elizabeth Holmes’ blood test that alleged to be able to do blood tests with a single drop of blood, but never actually delivered on its promise.

Some social media users immediately took the opportunity to launch into conspiracy theories about the device, while others had a chuckle about the fact that it seemed like conspiracy-included folks would, indeed, become hysterically leery of Cue.

Others had more lighthearted fun, such as @enteedrums, who compared Cue to the box used in the Gom Jabbar test, a painful trial of endurance as seen in Dune.

Cue will no doubt see a bump in sales after the ad watched by tens of millions of viewers, but given the price it’s hard to image that a Cue will be in every home just yet.