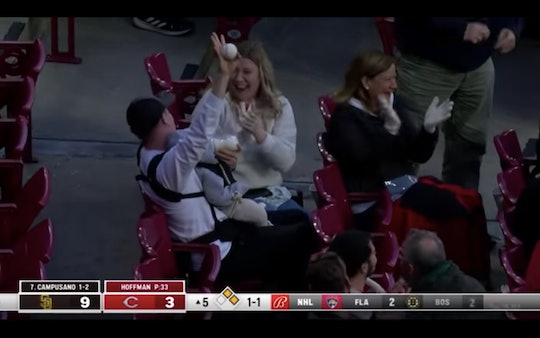 The baby didn’t even flinch... talk about dedication.

Perhaps it’s time to put the whole notion of dads being unable to multitask aside and give credit where credit is due. Especially give credit to this dad, who caught a foul ball while bottle-feeding his baby during a Cincinnati Reds game against the San Diego Padres. Please let me also tell you that this hero was wearing his baby at the time, and that said hungry infant looked remarkably unperturbed by his dad’s incredible catch. Which, if you think about it, could have hit his child in the head so he basically also saved his child’s life. This is instinctive parenting and instinctive baseball fanship on a level we rarely see. What an absolute treasure to behold.

Jacob and Jordan Kingsley took their baby boy Shepherd to a baseball game at the Great American Ball Park in Cincinnati on Tuesday when San Diego Padres player Luis Campusano hit a foul ball into the bleachers. Jacob was wearing his son Shepherd on his chest when the ball bounced off several seats and came flying towards him. Did he stop what he was doing to catch the ball? Nope. He just leaned forward and reached one hand into the air while feeding Shepherd his bottle. Who kept on drinking like nothing was going on.

The two parents were seen laughing over the amazing catch, while Shepherd barely glanced up from his bottle because his dad dealt with both tasks so smoothly. The video has since gone viral, of course, and Jacob told Jim Day of Bally Sports Cincinnati that his first instinct was “safety first, obviously” when he saw the ball coming towards him and his family. “I just wanted to keep him happy, and so did my best to protect him at the same time, reached a hand up” and caught the ball. As happy as he was to catch the ball, for Jacob it was “baby first,” even though he admits Shepherd “probably didn’t even know it was happening, but it will be a great memory to share with him.”

Jacob isn’t the first dad to catch a ball while holding his baby at a game. That same night, another dad at a Seattle Mariners game caught a ball while wearing his baby. Another man was seen juggling his baby, a beer, and a foul ball with great success. Dads wearing their babies and catching foul balls at baseball games is a trend I can really get behind.

More Like This
Mom Gave Birth On The Side Of The Road... With Her Five Other Kids In The Car
Lawmakers Passed Two Bills To Address The Baby Formula Shortage
This Free Website Connects Parents Who Need Formula With Those Who Have It
Parents Will Demand $675,000 From Son & Daughter-In-Law If They Don't Have A Kid Soon