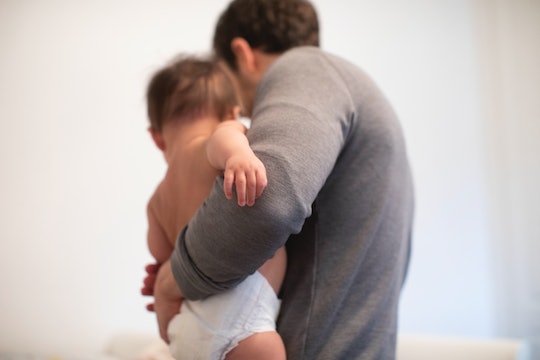 “He just doesn’t want to interact with them.”

While we appreciate the playful antics of Bluey’s Bandit and Chilli making parenting look like a never-ending game, we don’t think there’s a non-cartoon dog parent out there who doesn’t acknowledge that sometimes raising children is annoying. (Even the Heelers admit it from time to time!) But while we can all agree that reading Green Eggs and Ham for the 47th time (that week) is less than fun, a post titled “My husband doesn’t enjoy being a parent” on Reddit’s r/Parenting takes this sense of dread to another level.

The “OP” (that’s “original poster” for those not fluent in Reddit-speak), shares in her viral post that she and her husband, both in their late 30s, have two daughters, a 5-year-old (whom she describes as “so sweet and happy and easy going”) and a 2-month-old (“a baby, but hopefully she’ll be sweet and happy too!”). She stays home with the children and he works outside of the home. But while she relishes raising their children, her husband, though loving, is far less enthusiastic.

“My husband just doesn't enjoy being a dad or take pleasure in spending time with them. He loves them dearly and wants the best for them and can enjoy them in very short increments of time, but he finds it painful (his own words) to spend any significant amount of time with them,” she writes. While she notes that her husband is “careful” not to let this disdain show (she doesn’t believe that her daughter has picked up on her dad’s feelings), he will do anything he can to avoid meaningfully engaging in childcare, observing sadly, “I sometimes feel like my husband creates tasks for himself over the weekend just to get away from us ... he just doesn’t want to interact with them.” Apparently, he finds the time spent with them “boring and unenjoyable.”

“Is there anything I can do to make him find genuine joy in being with his kids?” she asks in conclusion. “He's [sic] rather do the dishes or mow the lawn than read our children a book.”

Child development experts, including the American Academy of Pediatrics (AAP) stress the importance of play as being crucial to developing strong bonds between parents and children and promoting the social-emotional development and well-being of children. And while there’s also a benefit in letting kids find their own sometimes (indeed, research has also found that boredom, essentially, builds character) that doesn’t mean avoiding your kids is good for them across the board.

Now the internet in general and Reddit in particular has a reputation for commenters hungry for human flesh: any opportunity to get judgmental and histrionic is often pounded upon. But for the most part, the comments for this post were largely compassionate, both for the OP and even her husband. Parents who found themselves facing similar feelings about playing with their kids came forward to share their own experiences. Dads who didn’t know how to interact with young children, moms who really don’t like imaginative play, partners who have experienced similar issues with their own co-parent, and even folks who experienced this level of standoffishness with their own parents. But while there was good advice and compassion, pretty much everyone, even those who related to the OP’s husband, agreed: whether through therapy or meaningful discussions with his wife, he is going to have to figure out how to fix this, because it’s not acceptable.

“He can’t change how he feels but he can exert more effort,” one Reddit user mused.

“He needs to be a parent, and sometimes that means doing something you don’t want to do for the sake of your child,” another commented. “Or else he needs to compromise and find activities he does like to do. It is incredibly important for children to get attention and individual time with their grown-ups.”

“My husband was similar when my kiddos were younger,” one replied to the post. “Fast forward ten years and now he wants a relationship with them, but it isn't there. I try to create/encourage interactions between them in an attempt to build relationships — but that has failed too. I guess what I am saying is that there could be regret down the road. Maybe speak to him about that aspect of his lack of interest.”

Whether readers found the topic discouraging, sad, or deeply relatable, the OP received a lot of great advice from a variety of perspectives. Hopefully, she and her husband (but mostly her husband) can work together to take all this good advice to heart.

More Like This
Reddit Backs Mom Who Got Scolded By Teacher For Not Inviting 30 Kids To Birthday Party
Florida Teachers With “Unvetted” Classroom Books Could Face Felony Charges
Jacinda Ardern No Longer Has “Enough In The Tank” & Moms Know Exactly What She Means
Mom On TikTok Asks Daughters Why They Want To Be Boys & Same, Girls, Same
What Parents Are Talking About — Delivered Straight To Your Inbox