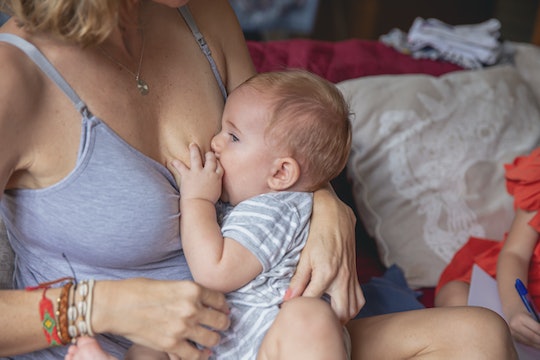 “She said [the baby] needs to latch for a few minutes everyday to ‘activate’ her milk production.”

A grieving husband took to the popular sub-Reddit Am I The A**hole” forum recently to share his confusion over his mother-in-law trying to breastfeed his baby, and the online community really had some deep feelings about the whole situation.

In the viral post, the Reddit user shared that he sadly lost his wife “minutes after she gave birth” to the couple’s daughter at just 34 years old. He took a leave of absence from his job both before and after his daughter’s birth, and told his 56-year-old mother-in-law that he planned to hire a nanny for his 4-month-old daughter when he went back to work. “She offered to do it (nanny) for free,” he explained on Reddit. “I told her she's free to come by anytime during the day if she feels uncomfortable with a nanny looking after [the baby] but she insisted on doing it herself. So I said yes and gave her a copy of the house keys.”

For the first several weeks, things seemed fine. But then he noticed that the baby formula he was using was barely touched, and that his daughter didn’t seem as hungry. When he mentioned it to his mother-in-law, she told him she had been trying to breastfeed the baby. “At first I thought she was joking then I realized she wasn't. She said [the baby] needs to latch for a few minutes everyday to ‘activate’ her milk production.”

While he understood that this mother was grieving the loss of her daughter, he was upset at the violation and told her she needed to stop. “She said she will but I caught her again when I walked in my daughter's room and she was forcing [the baby] to latch. I confronted her and told her she's no longer my baby's nanny,” he wrote.

The frustrated dad took a leave of absence to find a nanny for his daughter. The nanny he hired was subsequently fired by his mother-in-law behind his back. “She came in my house using her key and fired my nanny. I was about to call her when she showed up and said a convoluted story like how I hired an incompetent nanny, etc. etc,” he explained. “I told her to leave but she refused and told me she's calling CPS because I am endangering my child. We argued back and forth before I called the police and she was charged with trespassing.”

The rest of his family is upset with him over his decision to call the police, but folks on Reddit backed him up.

“Her trying to breastfeed your daughter without your permission is gross and completely wrong. Beyond that she FIRED YOUR NANNY? I’d ask for your key back and set some serious boundaries,” wrote one Reddit user.

Another added, “Change the locks. With the way she was hurdling over the boundaries you set, I wouldn't be surprised if she made copies. And make sure to tell the nanny not to let anyone in.”

One Reddit user noted that, by not giving the baby formula, she was essentially denying her grandchild food. “And she was starving the child in addition to it because MIL wasn't feeding formula. Let MIL call CPS. She's the one who'll end up with charges, not OP. Grief does not make someone starve a child. Press charges, and change the locks in case she made copies of the house key.”

People grieve in their own unique ways that can confuse others, of course this is understandable. But this dad is grieving, too. And trying to raise his baby. Going against his wishes, especially when it comes to the care of his child, has surely made this time even more difficult.

More Like This
This Reddit Post About Two Sisters In A Fight Over Breast Milk Is Complicated & So Sad
AAP Now Recommends Mothers Breastfeed For 2 Years Or More In New Guidelines
How To Breastfeed A Baby With A Cleft Lip Or Cleft Palate
Breastfeeding Twins: Everything You Need To Know