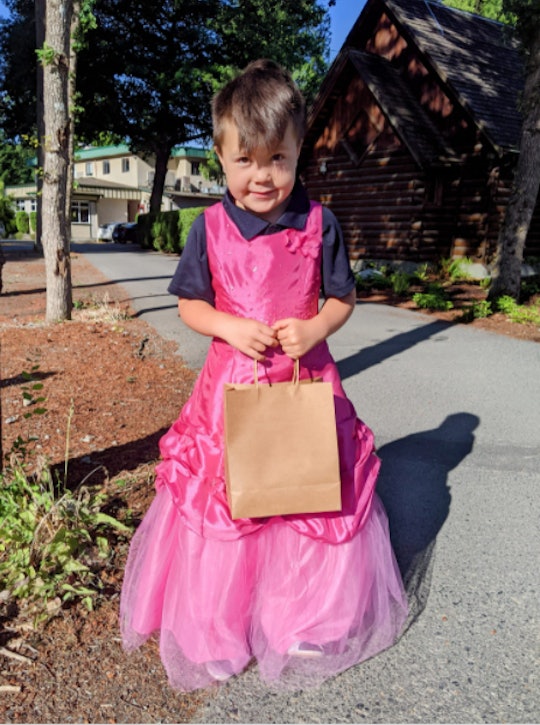 “What a strong little guy.”

Jared Qwustenuxun Williams is proud of his son Finn. And more importantly, the Canadian dad wants to make sure Finn is proud of himself — exactly as he is. A sweet little boy who defines himself as “just a boy who likes to wear dresses.” A young kid who wants other little boys who might also want to wear a pretty dress feel seen.

Williams, a chef who lives in British Columbia with his two sons, took to Facebook on Sunday to share a now-viral photo of his son Finn wearing a bright pink gown with a story about why he’s “so damn proud of his strength and bravery.”

“At the start of the school year some kids were not as cool about his dresses and said some stuff that sent him into a few months of pants only,” Williams wrote. “But in the last months of the school year Finn has been back to his true self, which makes him and his family so happy.”

To celebrate Finn’s return to his true self, his dad asked if he could take a photo of him in his dress and share it. Initially the little boy said only one person could see it until his dad spoke to him about what his picture could mean to other little boys.

“He is not a fan of sharing his picture,” Williams wrote. “But a few days later I sat down with him and asked again, but this time I said. ‘Hey bud, remember that awesome picture of you in that beautiful pink dress? Well remember how you were afraid to wear a dress for a while? Well, I want to share your picture so that if maybe if another boy is afraid to wear a dress he'll see your picture and not be afraid because he can see you in a dress and know he is not alone.’ Finn got the biggest smile on his face and said, ‘Dad, maybe you should share that picture.’ What a strong little guy.’”

Finn loves to wear dresses and his dad supports him.

A strong little guy with a pretty big fan base. Finn’s photo has gotten loads of love on Facebook, with over 22,000 reactions and more than 11,000 shares since the post was shared earlier this week. “What a star! Loving the dress, Finn, keep being you, because you are doing a great job of it!” one person commented. Another said, “An awesome boy and an awesome dad. I love how Finn just makes it clear and simple and no big deal...as it should be.”

Gender norms and stereotypes are antiquated and prohibitive, a construct of past generations and their need to pigeonhole children before they had the chance to know who they really were inside. Dads like Finn’s, who encourage and embrace the child they have rather than a child built by societal expectations, need to be celebrated. Much as Finn, a boy who just likes to wear dresses, is celebrated.