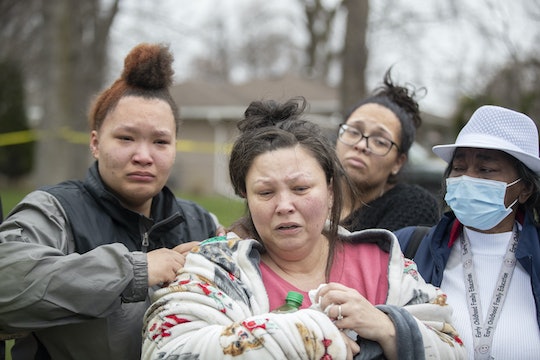 Daunte Wright’s Parents Opened Up In An Emotional Interview

The 20-year-old was shot during a traffic stop.

In the wake of a 20-year-old Black man’s shooting at a traffic stop by police, Daunte Wright’s parents spoke out in an emotional interview on Good Morning America. Wright was shot after being pulled over by police in Brooklyn Center, Minneapolis on Sunday for having expired license plates on his SUV, and his parents are now dealing with the loss.

Daunte Wright’s parents, Katie and Aubrey Wright, sat down for an interview with Good Morning America’s Robin Roberts to discuss the death of their 20-year-old son. The young man was shot and killed by Minneapolis police officer Kim Potter, who The New York Times reports had intended to shoot Wright with a taser to prevent him from fleeing the scene before mistakenly shooting him with her firearm.

Wright was initially pulled over for the expired plates, as well as being suspected of having an air freshener in his car (which is illegal in Minneapolis), when officers discovered a "gross misdemeanor warrant" for Wright's arrest had been issued. He was shot and died on the scene.

Now Wright’s parents are speaking out about their son’s death, in part to thank the hundreds of peaceful protesters who took to the streets after news of his shooting.

Duante Wright’s parents speak out after his shooting.

The bereft mother explained in her interview that her son Daunte had called her after he had been pulled over by the police for having air fresheners and expired plates, but that she was planning on helping him by “giving all of the insurance information” over the phone.

When the officers returned, Katie Wright said that they asked him to step out of the car and put the phone down. After the phone was hung up she tried to call back a few times, and when she finally got through “the girl that was with him answered the phone and said that they shot him and he was laid in the driver’s seat, unresponsive.”

Katie Wright also spoke at a live press conference on Monday, reminding the crowd of supporters her son “was only 20 years old and he didn’t deserve to be shot and killed like this.” As for all of the protesters who are feeling frustrated that another Black man was killed by police mere miles from the area where George Floyd died in 2020, Wright’s words were those of a mom, not an activist, “I don’t want all of this, all of this. I just want my baby home,” she said. “That’s all I want is I want him to be home. I don’t want everybody out here chanting and screaming, yelling, I just want him home, that’s it.”