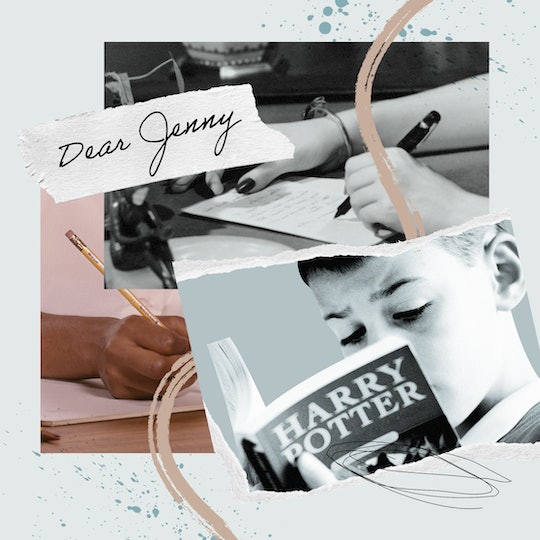 Dear Jenny: Do I Tell My Kid About J.K. Rowling?

What do I tell my 7-year-old about J.K. Rowling in light of her comments about trans people? My daughter loves Harry Potter, and she reads books by other authors whose views are probably equally problematic. (We don't know because they died between 1890 and 1960 and thus did not have Twitter.)

She ALSO reads books about trans kids and books written by underrepresented races. But she loves everything Potter, and so do her friends. Should we ban Harry, or should we embrace the Death of the Author theory, or should we go with what Daniel Radcliffe says, which is that if you find connection and understanding with the characters, then that's great and something-something I didn't actually read his statement. We already own the books/movies, and there's not much else to buy. Help!

I was an adult when Harry Potter hit. My girlfriend at the time was a fan, so I was dragged to the Daly City, California, movieplex for the opening of the first film. Years later, I was in Bergen, Norway, on my way out of another theater, when I encountered a parade of young Norwegians dressed as wizards — because the theater was also playing Harry Potter.

No matter how you feel about Rowling, the Harry Potter franchise is unavoidable. Even my 10-year-old stepdaughter, who wouldn't call herself a fan, once requested a Harry Potter-themed birthday party. We have the leftover plastic glasses to prove it.

Over the years, fans of the books and the movies have flagged aspects of the narrative that are problematic: the overall Whiteness of the characters and their world is an issue. So is the inclusion of hooknose goblins who control banks, an Asian character named "Cho Chang," and an Irish character who often blows things up.

"If your kid has friends who are trans, connect the issue to them."

But the most well-known controversy is that author J.K. Rowling has shown herself to be anti-trans. She has "liked" various anti-trans tweets; used Twitter to support an anti-trans researcher; and written a 3,600-word essay claiming that transgender women make cisgender women "less safe" because they are really men invading women's bathrooms. She has written transgender or "transvestite" characters who are either attempting murder (and being punished with the threat of prison rape) or, as in her newly released book, straight-up serial killers.

All of which is to say, TU, that many parents share your concerns about J.K. Rowling's personal beliefs vs. your kid's enjoyment of her stories.

For help answering your question, I turned to a few transgender people in my life — not just parents but young adults who grew up with Harry Potter. Tobias, 17, was a big fan of the books and movies until Rowling revealed her beliefs. "It was really hard for me to wrap my head around the extent of J.K.'s abuse of power," he says. "She is making the world more dangerous for trans women."

If Tobias were a parent, he would avoid the Harry Potter franchise altogether. "There are literally millions of hours worth of really good content out there for kids! Some authors have much better representation, like Rick Riordan, especially later in his series."

He also recommends talking to your kid about why you're skipping Rowling's work. "If your kid has friends who are trans, connect the issue to them."

Donnie Weaver, 30, the parent of a 4-year-old, decided his family will be fine without Rowlings’ books. "We're an anti-Harry Potter household, and we always will be." He looks to media like Steven Universe instead.

But Weaver acknowledges that not all families are willing to do that or think it's necessary. If your kids are really into Harry Potter, Weaver recommends connecting with it in ways that don't send money Rowling's way.

You've already bought the books and streamed the movies, TU, but there actually is a LOT else to buy, if you choose. There is in fact limitless Harry Potter merchandise being advertised to your kid, all of which Rowling profits from and none of which can be defended as Art. This stuff you can say no to. "Your kid wants to be Harry Potter for Halloween? Great, put him in jeans, and pencil on a scar [rather than buying a costume],” Weaver suggests.

Which makes me think of our bag of leftover Harry Potter party favors.

My son is 3 and has already seen a Harry Potter movie. Right now, beautifully, the concept of gender makes little sense to him — he still mixes up his pronouns when referring to the people in his life (OR DOES HE), and he's in a wonderful place where he loves both male superheroes and "bootiful princesses" and wants to be Elsa from Frozen for Halloween. Still, we talk about gender and sexuality. He knows I identify as a woman and his dad identifies as a man. He knows he and his dad have penises and I have a vagina. I've tried to talk to him about my bisexuality, but he'd rather show me he can stomp and run at the same time.

The harder conversation is about the difference between the art and the artist, which is really what your question is about.

We haven't made it to transgenderism, but I suspect the conversation will be easy: His imaginary friend, Guja, who lives in his pocket, is a "bootiful princess" — with a mustache.

The harder conversation is about the difference between the art and the artist, which is really what your question is about. Someone created Harry Potter, but Harry Potter and the other characters are separate from her, from these stories. She is connected to them and profits from them, but she is not them.

Ronnie, 21, who identifies as nonbinary and genderfluid, doesn’t think you need to ban Rowling’s work from your children’s bookshelves. Ronnie thinks parents should introduce it "with caution and mindfulness” because “some of the things [J.K. Rowling has] put out into the world carry some of her intolerance." Still, "Just because she has shown herself to be a bigot does not mean that what she's created is untouchable. What's important is to think critically about her art."

Whatever you decide, it is almost less important than the conversation you have with your kid about it, TU. The bottom line: Talk to your daughter about J.K. Rowling (you can use these resources). You know your kid better than anyone, so use markers in her life — about art and artists, transgender people, consumerism, being an upstander and taking action — to have this conversation. Explain in age-appropriate terms what transphobia looks like and how it affects people. Explain your feelings about it. Then ask what her thoughts are — and whether she has ideas for action. Finally, keep coming back to conversations about transphobia — unfortunately, J.K. Rowling will always be an entry point.

DON'T THROW UP YOUR HANDS BECAUSE HARRY POTTER IS UBIQUITOUS. TALK TO YOUR KIDS ABOUT TRANSPHOBIA. MAKE MINDFUL CHOICES ABOUT BUYING HOGWARTS MERCH. YOU GOT THIS.