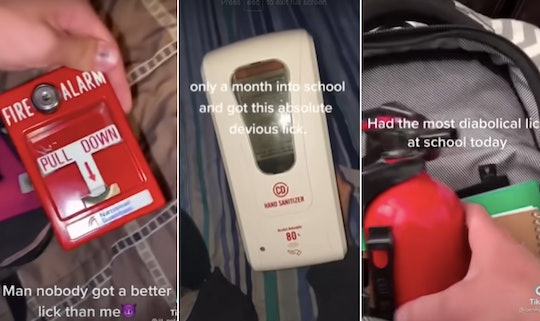 Parents, Please Talk To Your Kids About The “Devious Lick” Trend

The 2021-2022 academic year has barely begun and, already, schools are facing a slew of new challenges. While the pandemic still looms large, with many districts already having to go remote or quarantine thousands of students due to Covid close-contacts, another challenge has emerged that’s a potential health and safety issue for schools: the “devious lick” trend on TikTok, so here’s what parents need to know.

A “devious lick” is slang for stealing

“Devious lick” describes a TikTok trend of students stealing something (a “lick” is slang for something that’s been successfully stolen) from school. Anything from soap dispensers, which appears to be a common target, to signs; fire extinguishers to smart boards; even structural features like sinks, bathroom doors, and hand railings. The bigger or more expensive the item, the more impressive.

The trend has gotten millions of views on TikTok

On Sept. 1, TikTok user @jugg4elias shared a now deleted post showing themselves taking a box of disposable face masks out of their backpack. “A month into school...absolutely devious lick,” they captioned the video. “Should’ve brought a mask from home. Now look at you walkin round campus maskless you dirty dog.”

Thus the blueprint was born. Within days, other users followed suit, pulling allegedly stolen items out of backpacks, accompanied by a sped-up version of Lil B’s “Ski Ski BasedGod.” According to reporting from KnowYourMeme.com, some of these posts, including one (now deleted) from user @dtx.2cent gained more than 7 million views in just two days.

After that, videos proliferated on the app, sometimes styled as “mischievous lick,” “unfathomable lick,” or “diabolical lick,” among others.

While there is no way of knowing which of the videos are genuine depictions of stolen or vandalized items, several schools have addressed problems stemming from the trend. Canyons School District in Utah, Sunlake High School in Florida, and Grand Blanc High School in Michigan are just a few to report having school property stolen or destroyed — from soap dispensers and signs to fire safety equipment — all linking the vandalism and theft to, in the words of Canyons School district spokesperson Jeff Haney, “a stupid TikTok craze.”

In a video on TikTok from @drexerss, apparently taken while in school, a woman’s voice over an intercom relates that “because of the antics of a few,” one of the boys bathrooms had to be closed and the two remaining open no longer had soap or soap dispensers.

She also stated that anyone caught would be punished to the fullest extent possible, including arrest and incurring financial responsibility for the theft or damage. “Please make sure everyone listens very clearly,” she says, exasperation mounting. “When we catch you, there will be consequences. Please stop this behavior now.”

Teachers are similarly frustrated by the trend

While much student-generated content on social media, including Twitter, ranges from amused to dismissive, teachers and administration are dismayed and exhausted, particularly in light of the added challenges posed by teaching in a pandemic. Sarah Ashman, a high school teacher in Michigan, expressed frustration with the trend after her administration made a statement to staff and students about an uptick in bathroom vandalism, including soap dispensers, which caused the closure of several restrooms. “I could not think of a worse time for students to lose access to the one place they can wash their hands at school than now,” she tells Romper. “This is disappointing on so many levels, but, as we always do, we’re making the best of it.”

“This is a pre-K problem,” TikTok user @theglamteacher said. “I signed up to teach middle school so I don’t have to deal with pre-K problems.”

As of Sept. 15, the app has taken down “devious licks” videos, and issued a statement urging users to cease such behavior. “We expect our community to create responsibly — online and IRL,” the company said in a statement, posted to Twitter. “We’re removing content and redirecting hashtags and search results to our Community Guidelines to discourage such behavior. Please be kind to your schools and teachers.”

More Like This
The FDA Is Worried People Are Cooking Chicken In NyQuil
Kids With Head Lice Don't Need To Miss School, AAP Stresses In Updated Guidelines
McDonald's Is Going To Sell Happy Meals Just For Adults So We Never Have To Grow Up
How To Help Families Impacted By Hurricane Ian