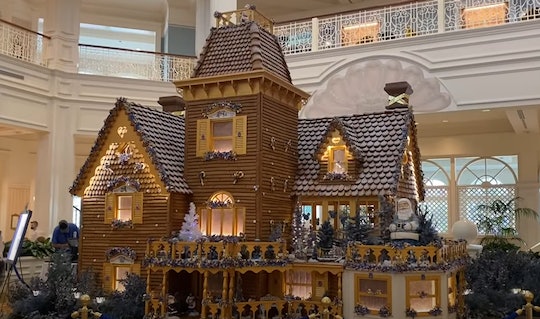 “This helps the declining bee population by keeping them well-fed during the winter months when food sources are harder to find.”

Have you ever wondered what happens to Disney World’s giant, homemade gingerbread house displays after the holidays? Well, it turns out, they’re used to give back to nature. In a new Tiktok video, Disney Parks demonstrated how they use the gingerbread for composting and the icing to feed thousands of Florida bees at a nearby tree farm.

In the video, pastry chefs dismantle the displays and the pieces are then taken to the Walt Disney World Resort tree farm, where bees can indulge in the icing structures. “This helps the declining bee population by keeping them well-fed during the winter months when food sources are harder to find,” Disney World sous chef Rheanna explained in the video.

After the bees eat up all of the icing and edible treats, the wooden structures from the display are cleaned and stored to be reused for next year’s displays. The TikTok video has been liked over 1.1 million times.

“This is absolutely amazing,” one TikToker commented. “Save the bees!” Another jokingly commented, “Bees in Florida, ‘DISNEY IS COMING! Get the Queen!” Disney started incorporating bees in their gingerbread house cleanup process when they realized the bees had a sweet-tooth other than honey.

“Ten years ago, when performing our annual gingerbread display cleaning, we noticed bees were very attracted to the sugar on the displays after deconstruction,” Barry Stockwell, a planned work specialist with Disney's event decorating support, explained in a Disney Parks blog post. “We decided to bring the display pieces to our Disney tree farm and lay them out in our field to give the bees a chance to collect the sugar on the wooden structures.”

Bee populations have been declining all over the world. Florida is home to over 300 species of bees, according to the Florida Department of Agriculture and Consumer Services. The state has over 4,000 registered beekeepers, which is an increase from a decade ago, where beekeeping was at 650.

Disney is committed to doing its part to put a sting in the situation. The gingerbread displays the bees feast on are set up each year at Disney's Grand Floridian Resort & Spa and Disney's Beach Club Resort. Once the bees are fed, they return to local forms and produce honey that farmers harvest and sell.