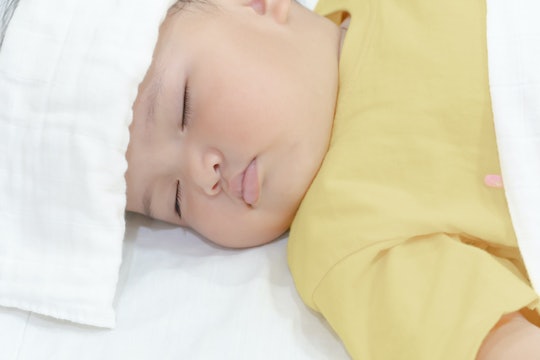 Do Babies Sleep More When They're Sick? Because You Could Use A Nap, Too

You can probably tell pretty quickly when your kiddos are getting sick: They get that telltale glassy-eyed look, they don’t want to eat even their favorite foods, and their energy level dips. While you’d usually rejoice at the sound of a quiet house, it's actually pretty awful to realize your kids aren’t feeling their best, especially when they’re babies and can’t articulate how they feel. One of the first signs of sickness in your baby can be a change in sleep. But do babies sleep more when they’re sick?

“During sleep, our bodies heal, so it's drastically important that we give babies and infants a chance to do just that,” pediatrician Dr. Tanya Altmann tells Romper. “If they wake up in the middle of the night, feel free to go in and comfort them and encourage them to sleep; that will help them get better soon and fight off the illness.” She adds that while schedules are usually great, it's ok to break from routine while the child is sick.

Just like you probably crave sleep when you’re under the weather (or when you’re caring for kids during flu season) babies will likely sleep more when they’re sick, but unfortunately that extra snoozing might not happen during the night.

Your baby may actually sleep less when they’re in the midst of sickness because they’re uncomfortable (sorry to break the bad news), but an uptick in sleep can mean your baby is on the mend. “Often when the illness is subsiding and symptoms such as fever are lessening, then you will see babies sleep more,” pediatric hospitalist Dr. Cindy Holt tells Romper. “Some parents are concerned when this happens, but it is just the body’s natural response to the recovery process.”

Sick children will give you signs when they’re tired so you can follow their cues to figure out when they need the extra shuteye. You might be tempted to put them to bed earlier, which does work in some cases, but they could really just need an extra nap instead.

“When babies are sick, they usually will sleep when they need to, which often tends to be during the day,” Altmann tells Romper. “Sometimes though they are so uncomfortable it will be hard for them to settle down, so usually comforting measures like rocking may help. If they seem tired, then go for an earlier bedtime and keep your fingers crossed [that] they sleep all night!”

It can seem like your baby is sleeping a staggering amount (even when they’re not sick). “The first few months of life, babies need about 14 to 17 hours of sleep in a 24-hour period and will usually wake up every two or three hours on their own to feed," Altmann says. As they get older, they'll sleep less overall, but will begin sleeping longer stretches at night. You may also feel like they're sick all the time, but that doesn't mean you're doing anything wrong. In fact, "most healthy babies will get six to eight colds before their first birthday," per Parents. Fun.

During a cold or flu, you might think your little one is having a sleep regression, especially if they’re waking up during the night or taking more naps than usual, but it’s nothing to worry about. “Too much sleep is only a concern if it is in association with continued illness, [or] the illness seems to not be getting better,” Holt says. “Always call your physician if you're concerned.”

Babies heal through sleep so it's important they get enough of it, but “in general, it doesn't really matter when they get extra sleep,” Holt says. So if they’re acting tired way before bedtime, it’s totally fine to put them to bed early, or to incorporate an extra nap into the day. Who knows, maybe you can get a snooze in too, or more likely, some uninterrupted time to sanitize every surface in your home.

More Like This
Baby Growth Spurts: When They Happen & What To Expect
When To Stop Swaddling Your Baby: 8 Signs It’s Time To Transition
Is It Good For Babies To Be Exposed To Germs? It’s Complicated
25 Winter Solstice Baby Names For Your Magical Little One