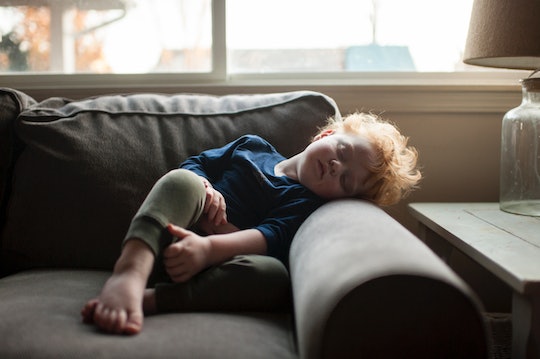 Yeah, Your Toddler Absolutely *Can* Nap Too Long, So Here's When To Cap The Snoozing

I had no idea how anxiety-inducing this sleep business would be with my son. I knew that newborns didn’t sleep much at night and you’d be up feeding and changing them, but beyond that, I was lost. I had no comprehension of a toddler nap schedule, or that toddlers can even nap too long (Never wake a sleeping baby! Until their sleep ruins future sleep.), but honestly, I’m so happy to be at this stage where I have to worry about how long my toddler's sleeping. The 4-month sleep regression lasted until he was almost 7 months old, and I was afraid our child would never nap or sleep well again and I'd have to drop him off at the fire station. (Kidding — kind of.)

So can toddlers nap too long? Dr. Danelle Fisher, pediatrician and vice chair of pediatrics at Providence Saint John’s Health Center in Santa Monica, California, answers with a surprising yes. “Toddlers can sleep too long for a nap,” she tells Romper in an email interview. “This will usually manifest when the toddler goes to bed one to three hours later than their normal bedtime.”

Dr. Gina Posner, a board-certified pediatrician at MemorialCare Orange Coast Medical Center in Fountain Valley, California, tells Romper that you need to cut back on your toddler’s nap time if they’re having trouble falling asleep at night. “Toddlers should be getting approximately 12 to 14 hours of sleep between nap time and bedtime per day,” she says.

Figuring out the exact science behind a nap isn't easy — every child is different — but Posner does say that “during the day, their naps should be between 1 and 3 hours.” And if they’re not getting enough rest, you’ll know it. Fisher says, “Toddlers who don't get enough rest will be more cranky than usual and will also fall asleep at an earlier time than usual or sleep at times they don't normally sleep — i.e., while riding in the car.”

“If they are crabby during the day (everyone has their bad days, but if they are consistently crabby) they might need more sleep," Posner says. "Also it’s a sign if they are constantly dozing off and seem lethargic and lacking energy.”

The next step in this seemingly never-ending process of sleep training and sleep scheduling is when do you not have to worry about it anymore and your kid can drop that nap completely. (I can’t decide if I’m looking forward to this time or dreading it.) Posner says it’s OK to drop naps “when they get through the day without having breakdowns, they start sleeping for a longer time at night, when they lie down for a nap but don’t fall asleep, and when they have plenty of energy without napping.” Fisher says if your child starts going to bed one to three hours later at night after napping less than three hours, it’s probably time to cut the nap. But she also notes, “Quiet time is still good for most toddlers who don't need a nap, including spending time in their beds or bedrooms playing quietly with toys or books but not napping if they don't need to sleep.”

Toddlers really can sleep too long during the day, I’m sorry to say. Try to cap their nap time at three hours so they can get between 9 and 11 hours at bedtime. Seriously, future you will thank you for being proactive.

More Like This
Should You Be Giving Your Toddler Melatonin To Help Them Sleep?
Here's When Your Baby Might Start Sleeping Through The Night For Real
These 4 Sleeping Positions Will Keep You Comfortable After A C-Section
17 Best Potty Training Products For Toddlers