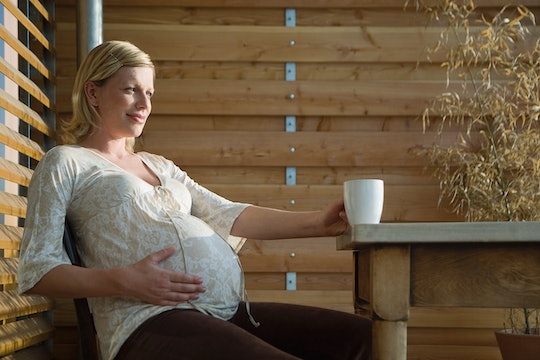 If You're Carrying Low, Will You Go Into Labor Soon?

When you're pregnant, people love to randomly choose some aspect of your body and use it to predict your future: Carrying high? You must be having a girl. Carrying small? Small baby. (Big? Big baby.) Carrying low? That baby's coming early. Never mind that some of these bits of wisdom end up directly conflicting with each other. Are they ever accurate? Does carrying low mean early labor?

"There is an event called 'lightening' that is considered a soft sign of labor," Nix continues. "Lightening occurs during the last few weeks of pregnancy as the baby’s head moves lower into the woman’s pelvis in preparation for labor."

But such "soft signs" of labor (which also include nesting, loose stools, passing the mucous plug, and an increase in Braxton Hicks contractions) don't necessarily mean that your due date is any closer.

"All of these 'soft signs' can occur, and a woman can remain pregnant for several days or weeks," says Nix. Not to mention the fact that "some women carry low their entire pregnancy."

Among the factors that affect how a woman carries her baby are the baby's size, the mother's size, and the number of pregnancies a woman has had. As Nix says, "A larger baby takes up more room in the abdomen, thus appearing higher, versus a smaller baby that can sit lower in the pelvis, thus the pregnant belly appearing lower."

And for women who've had several pregnancies, the abdominal muscles responsible for supporting the uterus have been stretched and separated. "That built-in 'corset' you have to support the uterus is not as strong, so the pregnancy belly can appear lower," Nix explains.

Chances are, if you're carrying low, at some point some well-meaning Grandma or similar type will try to tell you that you're having a boy. But don't start picking out any names based on bump placement: Anecdotal evidence aside, just like the myth about high bumps being girls, experts still say these connections are nothing more coincidences.

“It’s clear to say that a child’s genitals has nothing to do with how the woman’s body looks when she is pregnant," Professor Steve Robson, the Vice President of the Royal Australian and New Zealand College of Obstetricians and Gynecologists, told HuffPost Australia.

"The way a woman carries a baby has more to do with the size of the baby — then the belly tends to pivot forward."

Even if the experience of "lightening" isn't a guarantee that your baby is coming any sooner, there are some benefits to your baby going low. As BabyCenter reported, heartburn usually tends to subside after lightening, and it's easier to eat more than two bites of food at a time before feeling full. You also might find that you don't get short of breath as often. On the other hand, you'll have to pee more than ever, and the pressure on your pelvis can make walking difficult (hence the pregnancy "waddle").

While lightening definitely means your body is starting to prepare itself for delivery, it's not a guaranteed indication of when labor will start. (You should, however, tell your doctor if you feel a sudden increase in pelvic pressure or like your baby is "pushing down" before 37 weeks.) You could have weeks left to wait, or no time at all. Some women don't experience lightening until labor actually begins.

"The only true symptom that indicates labor is coming is having regular, painful contractions with cervical change," says Nix.

"If that's happening, then a baby will soon arrive!"

More Like This
OB-GYNs Explain The Connection Between Stress & Miscarriage
What Foods Fight Nausea During Pregnancy?
Is Raspberry Leaf Tea Safe To Drink During Pregnancy?
Is It Safe To Pump While Pregnant? Experts Weigh In
What Parents Are Talking About — Delivered Straight To Your Inbox

This article was originally published on Sep. 13, 2018