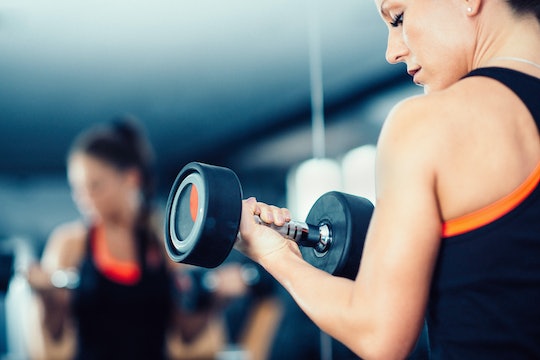 Here's How Intense Exercise Can Affect Your Fertility

When watching the 2018 Winter Olympics in PyeongChang, you can't help but feel impressed by the amazing, competitive athletes. But if you're also a super-athletic woman who plans to have kids some day, then there may be a pertinent question in mind: Does Olympic training impact your fertility at all, or is more exercise always a good thing in terms of overall health? The exact relationship between intense athletic training and fertility is not easy to unravel.

For starters, there are so many variables to consider when addressing Olympic training and fertility that the question is almost impossible to answer with any certainty. With the variety of Olympic sports out there, it stands to reason that the training needed to become an Olympic figure skating champion is vastly different from the training that goes into curling, biathlon, or cross-country skiing. Studies would need to be conducted at the level of the individual sport in order to provide more precise data.

In general, though, some studies have found potential links between intense athleticism and female fertility issues. Ovulation issues are sometimes found in women who undergo frequent, intense exercise, according to the Mayo Clinic. In some cases, such strenuous exercise can make a woman's cycle more difficult to track. If your ovulation is a moving target, then timing conception may be especially tricky. On a more extreme end, some women experience exercise-induced amenorrhea, or the absence of a period due to excessive exercise, as explained by WebMD. "If you're not having periods, it indicates that you're probably not ovulating and for sure you're not making enough hormones to sustain a fetus," Stephen K. Montoya, MD, OB-GYN of Sunrise Hospital & Medical Center revealed on Sharecare. But there are several reasons why a woman may experience amenorrhea, so a thorough evaluation of your hormone levels and a check for legions in your head should be done to pinpoint the cause of your amenorrhea, he explained.

So some women experience ovulation issues when they're actively engaged in extreme training, but do those effects on the body continue afterward? Again, it's difficult to say with 100 percent certainty whether hard exercise now will have impact on a woman's fertility later on. But according to a 2010 study of almost 3,000 women from the Norwegian University of Science and Technology, hard workouts appear to affect fertility only as long as the training continues. In other words, once hard-training women chilled out on the workouts a bit, their fertility appeared to return to normal.

Also, it's important to keep the whole correlation and causation thing in check. Are a female athlete's potential fertility issues caused by the exercise itself, or some additional factor? So many things can affect fertility, from hormonal imbalances to infections to stress, as explained by the American Pregnancy Association. It may be the case that a particular female athlete would have dealt with fertility issues regardless of her training regime.

Of course let's not ignore the larger, and at times problematic, history of the perception of women and exercise. I mean, the Victorian doctor Herbert Spencer basically claimed that women who chose to exercise would not have the energy to also bear children, according to Bustle. And before you discount Spencer as a misled product of his time, there's still a good bit of hand-wringing about female athletes and their ability to have babies. In fact, a simple Google search for links between "exercise" and "fertility" bring mostly female-centric results for the first page, although men are, you know, half of the baby-making equation. (Training can affect men's fertility as well: extreme exercise may reduce a man's sperm count, according to WebMD. But these findings don't seem to raise the same amount of alarm.) This isn't to say that verified scientific findings about athleticism and female fertility should be ignored, only that it's important to consider the cultural context in which these questions arise.

And even if intense exercise may affect one's fertility, that does not mean that it is impossible to conceive while training for the Olympics, as these female Olympians who competed while pregnant prove.

Ultimately, the link between extreme athleticism and female fertility looks like one of those inquiries that raises more questions than answers. In terms of your own reproductive health, however, reach out to doctors for advice.