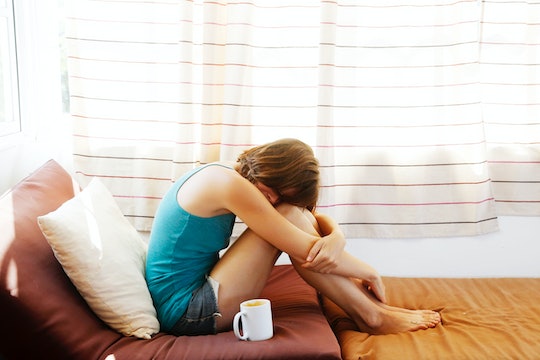 Why Does Your Vagina Smell Different During Ovulation? Experts Explain

It's not just your imagination.

If you're trying to get pregnant (or, for that matter, if you're trying not to get pregnant), you've probably taken it upon yourself to become as familiar with your body's fertility signs as possible. You might have figured out that when you're ovulating, you tend to get weird, burning cramps on one side of your abdomen. You might notice that your bra gets tighter at the same time every month. You might have a stronger sex drive when you hit peak baby-making time. But did you know your vagina can even smell different during ovulation?

Considering how many scientifically proven changes our bodies go through during our most fertile phase of the month, it's no surprise that a shift in scent would take place. And it's not just "down there" that you might notice a difference in body odor: Research published by the Association for Psychological Science found that men who were exposed to the scent of an ovulating woman's t-shirt displayed higher levels of testosterone than men who sniffed the shirts of a non-ovulating woman. So it's sort of like our bodies have built-in perfume. That's not all: A study conducted at The University of California discovered that even the pitch of women's voices gets higher when they're ovulating (presumably so we sound more feminine?); even lap dancers have been shown to earn higher tips when they're at their most fertile, as an analysis led by the University of New Mexico's Department of Psychology found.

"I am certain the vagina smells differently during ovulation for several reasons," OB/GYN Alan Lindemann tells Romper. "The entire vaginal PH and cervical mucus change during ovulation. The cervix produces mucus favorable to sperm. It is the home away from home for sperm. Intact mucus bars all invaders except sperm, which live in intact mucus and are released into the uterus in a shower over several days. That's why conception can occur over 48 to 72 hours after intercourse," he explains.

"Then there are pheromones," Dr. Lindemann adds, getting back to those testosterone-inducing t-shirts. "In humans, there are three kinds of pheromones: axillary (armpit), vaginal, aliphatic acids (organic compounds with open chain structures), and stimulators of the vomeronasal organ (olfactory sensory cells)."

The closer you get to ovulation, the higher your estrogen levels rise. This causes your cervix to produce more "fertile quality" mucus, which has a texture similar to egg whites (it's also known as EWCM, or "egg white cervial mucus") and has a particularly sperm-friendly pH. It's also usually clear or cloudy and/or white. But the identifying characteristics of fertile mucus go beyond feel and appearance, as doula Kelly Winder pointed out on Belly Belly.

"Fertile mucus will even smell sweeter (and apparently taste sweeter) than less fertile mucus which may have a more vinegar scent," she wrote.

On the U by Kotex website, Molly O'Shea M.D. explained the monthly evolution of your personal scent based on the shifting qualities of your CM:

"Throughout your cycle your vaginal mucus changes and as it changes, the odor it may produce will change too," she said.

"In the first half of your cycle, as your body is ramping up to ovulate, you will have clear, stringy vaginal discharge with little or no odor. If there is an odor at all, it is slightly sweet smelling due to the acidity of the vagina. After you ovulate, your mucus gets thicker and slightly whitish in color and will be more vinegary in its smell."

These changes in scent may be very subtle, which can be frustrating if you're TTC. As helpful as it would be in the baby-making process if ovulation had an unmistakable, universal, and consistent bouquet, you truly might not even notice the change. That's okay, though — in many cases, strong vaginal odors are a sign that something's not quite right (such as a yeast or bacterial infection). As Lauren Streicher, M.D., an associate professor of clinical obstetrics and gynecology at Northwestern University Feinberg School of Medicine, told SELF, healthy vaginal odor should be slight and not especially unpleasant.

“There shouldn’t be a strong odor and it shouldn’t smell like the zoo or fish.”

Indeed. At the end of the day (or cycle, to be more accurate), everybody's different, and there's no guarantee that a particular scent means your body is ready to make a baby. But if you notice that you seem to be producing the same smell every month during your most fertile days, it could be a pretty big clue.