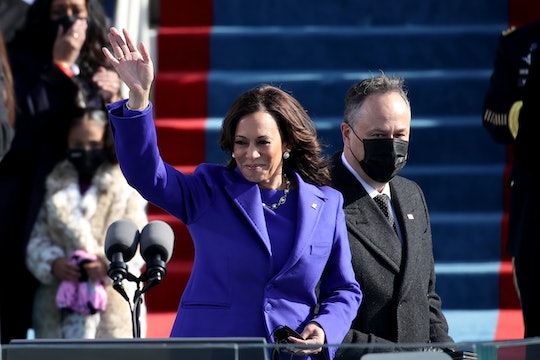 Doug Emhoff's Ex-Wife, Kerstin, Supported Her Friend Kamala Harris As She Made History

The vice president has called the mother of her stepchildren a "dear friend."

Though inaugural crowds were small this year due to the pandemic, one attendee was "so excited" to be there: Second Gentleman Doug Emhoff's ex-wife Kerstin, who came to the inauguration to support her friend, Vice President Kamala Harris. While it may seem unusual arrangement, the friendship between Doug, Kerstin, and the new VP is long-standing and well-documented. In a 2019 essay for Elle, in fact, Harris joked that their "modern family is almost a little too functional."

Kerstin is the founder and CEO of the film production company Prettybird (the company behind Beyoncé's award-winning "Formation" music video). She posted pictures from the inauguration and the evening's fireworks on her Instagram account, including one of her on the steps of the Capitol. "This is real. So excited behind the mask!" reads the caption.

Her excitement has been bubbling for quite a while now; she supported Harris' 2019 presidential bid, and even helped on the campaign. “They were like, ‘The ex-wife wants to do what?’” she recalls in an interview with Marie Claire. Her Instagram account over the past several months is generously sprinkled with supportive messages to Harris and Doug on the campaign trail.

On Nov. 7, the day Joe Biden's victory was announced, Kerstin posted a photo of President Biden, First Lady Jill Biden, Harris, and Doug. "So proud! So relieved! So excited to be on this journey!" she wrote. "Congratulations to Kamala and Doug for making history! People around the world are cheering for all of you today."

According her Marie Claire interview, Kerstin has been cheering for Harris since she first started dating Doug in 2013. “When [Doug and Kamala] first started dating and [Kamala] was [attorney general of California], I just thought, Wow, that’s cool. Don’t mess this up!” she said. (He did so well, in fact, that he and Harris were married within a year.)

Doug and Kerstin were married for 16 years before divorcing in 2008. The pair have two children, Cole and Ella, who call Harris "Momala." Indeed, the love the three have for their children (both adults) seems to be a driving factor in their friendship. "To know Cole and Ella is to know that their mother Kerstin is an incredible mother," Harris wrote for Elle in 2019. "Kerstin and I hit it off ourselves and are dear friends. She and I became a duo of cheerleaders in the bleachers at Ella’s swim meets and basketball games, often to Ella’s embarrassment."

But Ella, now in her 20s, appreciates their bond. "They have good communication between the three of them," she said in an recent interview with the New York Times. "They are really a unit, like a three-person parenting squad. It’s really cool."

The First and Second Families are often seen as a model for Americans, and it's encouraging to see a blended family center stage, particularly when they've found a way not only to get along, but thrive together. According to the Pew Research Center, 16% (or more) of Americans are part of a blended family, and that number is only growing. The Emhoff-Harris family represents many Americans who have found happiness outside of the cookie-cutter "norm," and show that even in the face of divorce, separation, and moving on, friendship and respect are possible.