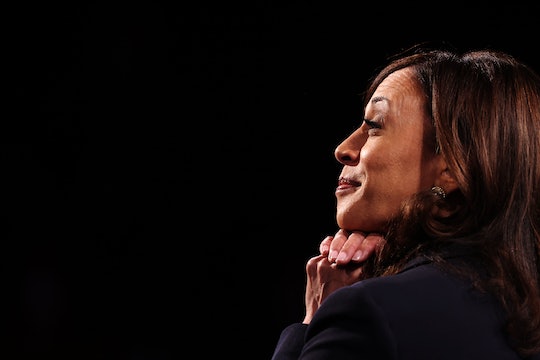 Why It Matters That Kamala Is Momala

Within minutes of her first debate with Vice President Mike Pence, Senator Kamala Harris gave him The Look: the skeptical gaze of a woman who knows you’re not telling the truth, but is going to let you keep talking yourself deeper into that hole. Raised eyebrows, side-eye, wry smile. Twitter recognized and named this expression immediately — it was The Mom Look. It makes sense, of course; after all, Kamala is Momala.

It’s a title she owns proudly. Twitter only provides 160 characters to create a bio; for public figures building their “brands,” every word must be carefully chosen. And 13 words in, after “senator” and “VP candidate,” Harris includes the words female candidates have assured voters of since we’ve had female candidates. She is “wife” and “Momala,” the nickname her stepkids gave her when she married their dad. It’s something she invoked shortly into her first speech as Joe Biden’s running mate: “I’ve had a lot of titles over my career, and certainly vice president will be great, but 'Momala' will always be the one that means the most." On hearing this in August, I bristled as I beamed. I beamed because, as a mother, I recognized the empowerment Harris clearly saw in her own experience raising children, and bristled because the language of female politicians talking about motherhood is familiar and obligatory in a way it is not for fathers who seek office.

Motherhood in politics is both the carrot — successfully drawing voters to a female politician, reassuring them that she is non-threatening and relatable — and the stick, except one wielded by a public that does not hesitate in using it against the woman in question.

Harris isn't the first mom to seek public office or even the vice presidency. Hillary Clinton has talked about motherhood throughout her career, often tying her role as a parent to what motivated her policies. Nancy Pelosi invited a cadre of children, including her grandchildren, up to the podium both times she was sworn in as Speaker of the House. As John McCain's running mate, Sarah Palin attempted to appeal to voters by leaning into a tough-as-nails hockey mom persona.

Motherhood in politics is both the carrot — successfully drawing voters to a female politician, reassuring them that she is non-threatening and relatable — and the stick, except one wielded by a public that does not hesitate in using it against the woman in question. It is an important aspect of a female politician’s brand that can be weaponized both defensively (see Kellyanne Conway) and offensively (also see Kellyanne Conway). Indeed, discussing motherhood opens up female politicians to the kind of vicious criticism and judgment moms (even apolitical moms) know all too well and dads (even political dada) largely avoid. (Even when, for example, they’re on the record, multiple times, for saying that they “won’t do anything to take care of” their children… but also would hypothetically date the “hot” one.) It's both our culture’s exhausting parenting double standard and the Mommy Wars, writ large.

It’s also an inescapable pigeon hole. As on Wednesday night, Twitter often immediately relates to Kamala as “mom;” the writers at Saturday Night Live seem to know no other way.

It matters that Kamala is Momala; her approach to motherhood and maternal care stands out as historically unique, culturally significant, and important to our collective discussion about politicians and motherhood. It matters that she is a Momala with a super supportive husband, Doug Emhoff, who has thrown himself wholeheartedly into her campaign, taking on all of the duties we’ve come to expect of political wives on the campaign trail. She's not "mom" or "mommy" or even "mother." She is "Momala," an Indian-Amerian and Black stepmother. We rarely, if ever, have seen this version of motherhood take center stage, not only in the political arena but film, television, orany other aspect of mainstream culture. Even each descriptor taken separately — Black, Indian, stepmother — does not receive the kind of representation it deserves, and Harris is proudly repping all three.

Courtney Phillips, a stay-at-home mom of one daughter in North Carolina, co-founded Mamas4Kamala during the senator's presidential campaign. (The group now works to promote the Biden-Harris ticket.) While "Momala" isn't what initially drew Phillips to Harris, it has become important in how she identifies with Harris as a candidate and leader. She likens thinking of Kamala as Momala to the concept of finding yourself drawn to the candidate "you can have a beer with."

"I want somebody I can be on the phone with and be like, 'Hold on a sec, I have to throw marshmallows at my kid,'" she explains. "I need that understanding that you get it." As a mom, she says, Harris gets it.

Phillips also connects with Harris as a person raised by a step-parent. “My stepmom ... has been the most constant, influential woman in my life since she entered it when I was 2 years old," she says. "That special connection can be dismissed [by society], but seeing [Harris] as a stepmother and loving her stepchildren as children really is affirming for me in a similar situation. It’s a representation that isn’t talked about a lot.”

There are a lot of Momalas out there that are stepmoms, second moms, and aunties. Everybody comes about motherhood in different ways.

Representation also matters to fellow Mamas4Kamala organizer and mom of two Angel Hardy Heinz. “When I told [my daughter] VP Biden chose Kamala to be his candidate, it was just this look of joy on her face that someone that looks like her is the nominee and could be vice president of the United States," she says. Harris being a stepmother is also meaningful for Hardy Heinz, who, like Phillips, cherishes her relationship with her own stepmom. But it's another maternal role Harris has embraced that Hardy Heinz finds most significant: auntie.

"I think it’s really important because, especially in Black communities and communities of color where you grow up very close with extended families, aunties are like a second mother,” she explains. “There are a lot of Momalas out there that are stepmoms, second moms, and aunties. Everybody comes about motherhood in different ways.” With Harris, she says, we are finally seeing this represented a national political stage.

Dita Bhargava, a Connecticut political figure and Harris supporter, also sees importance in the idea of "Auntie Kamala." She points that, throughout India, across cultures and languages, a common word for aunt is "masi" (or a variation), which, in families like hers, means "like mom." As such, Harris taking on the mantle is of huge cultural significance for Indian-American voters, including Bhargava's mother, who met Harris at a fundraiser Bhargava hosted during primary season. "When [Harris] met my mom she said, 'Hi Auntie!' and mom was just like 'Oh my God! She called me auntie! She understands our culture!' She already loved her but after that she was a puddle."

Bhargava also connects with Harris through their shared experience of being first-generation daughters of Indian immigrant single mothers. “Kamala represents so many of our stories,” she says. “The struggles of our parents, the struggles we all had as first generation immigrants, the struggles we had as women. She just encompasses all the things that any person who looks like her can overcome.”

Harris often speaks of her mother, Shyamala Gopalan Harris, a biomedical scientist who died in 2009, including at the vice presidential debate. “The thought that I’d be sitting here right now, I know, would make her proud,” Harris said. “She must be looking down on this.”

'Momala' stands both in a tradition of female politicians embracing their motherhood and as a bold departure from it.

Bhargava sees both her mother and Harris’ as “tough cookies” but “extremely maternal.” Qualities, she believes, Harris has inherited and incorporates into her leadership. "I think her tenacity to fight — Kamala for the people — you can certainly draw analogies to moms who fight for their families," she says. "Kamala takes that maternal instinct and amplifies it to the people she represents."

Phillips agrees that the Senator's maternal instincts are intrinsic, not incidental, to her identity as a leader; an “acknowledgement of motherhood as a huge unique spectrum we’re all on." As moms, she says, “We connect on different areas of that journey, but I think it’s really empowering to see somebody who’s living an experience that’s not in the cookie-cutter mainstream."

"Momala" stands both in a tradition of female politicians embracing their motherhood and as a bold departure from it. A reminder that, at the end of the day, motherhood is an identity that transcends culture and politics.

Harris’ life is not ordinary: she has shattered glass ceilings and broken racial barriers on her way to possibly being the first female vice president in the country’s history. And yet, when she’s spoken of her career, she too talks about struggling to juggle both job and family — a struggle that is familiar to moms from every walk of life. So too is the adoration she feels for her children, Cole and Ella. “They are my endless source of love and pure joy,” Harris wrote in an article for Elle. “My heart wouldn’t be whole, nor my life full, without them.”