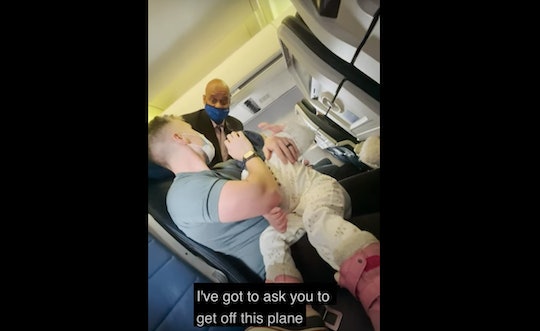 “We just got kicked off the flight because our 2-year-old would not put on a mask."

A trip to visit relatives in New Jersey turned into a frustrating nightmare for the parents of a toddler who didn't want to wear a face mask. In an emotional video shared on YouTube, Eliz Fulop claimed her family was kicked off a United flight after her 2-year-old refused to put on a face mask.

Additional video Fulop shared showed Orban holding a disposable face mask up to their daughter's face while the young girl covers her mouth with her hands and twists away and a United Airlines employee asking the family to grab their belongings and exit the aircraft. Fulop also captured video of her husband discussing the policy and the airline's enforcement of it with a United employee at the gate after having exited the aircraft.

"I just think that it's so, so stupid how you enforce this so strict," Orban said in the video. "It makes zero sense. This virus has a 99% survival rate, you know what I mean?"

According to the United Airlines website, employees and "all customers over the age of 2" are required to wear a face-covering when onboard the airline's aircraft. In a statement to Romper, a spokesperson for United said the airline's mask policy was not only consistent with every other major airline but also backed by guidance from the U.S. Centers for Disease Control and Prevention (CDC) and the Cleveland Clinic.

"The health and safety of our employees and customers is our highest priority, which is why we have a multi-layered set of policies, including mandating that everyone onboard two and older wear a mask," the spokesperson said. "These procedures are not only backed by guidance from the CDC and our partners at the Cleveland Clinic, but they’re also consistent across every major airline."

While the CDC has noted that "people age 2 and older should wear masks in public settings and when around people who don't live in their household," the World Health Organization (WHO) has said "children aged 5 years and under should not be required to wear masks."

In an interview with KFOR, Fulop said she and her husband had flown with their daughter three times since the pandemic had started, with their flight from Colorado to New Jersey set to be the family's fourth flight, but had not reviewed the airline's mask policy. They claimed their daughter had flown without a mask before without issue.

United told Romper they the airline has since made contact with Fulop and Orban and are investigating this specific incident. "We also refunded their tickets and returned their car seat and bags," the airline's spokesperson said. Additionally, the airline clarified that neither Fulop, Orban, nor their daughter had been banned from flying United in the future.

More Like This
Viral Reddit Post Asks If A Toddler Can Watch Cartoons Without Headphones On A Plane
"Corn Kid" Handed Out Over 40,000 Cans Of Corn At A Food Bank Ahead Of Thanksgiving
Hero Who Tackled Colorado Gunman Was At Nightclub With Family To See Drag Show
Over 10,000 Sippy Cups & Bottles For Toddlers Recalled Due To Lead Poisoning Hazard