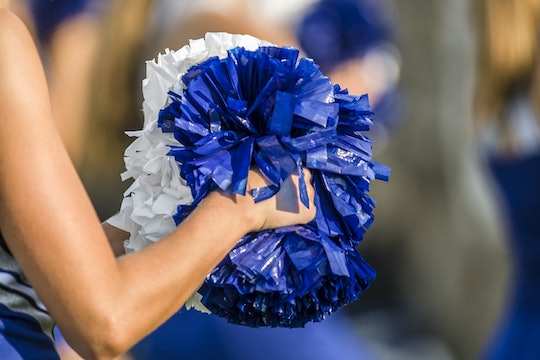 “I hope that no one ever has to explain why people deliberately choose to be exclusive.”

The family of a Utah teen with Down Syndrome said she was devastated to learn she’d been excluded from the cheerleading team photo printed in her junior high school’s yearbook despite having spent hours learning dances and attending meets and practices throughout the school year. Now, the family is raising awareness about the importance of inclusion and urging school officials to be better.

“There were two photos [taken]: one with Morgyn and one without,” Jordyn Poll, Morgyn’s older sister, wrote about the incident in a Facebook post published earlier this week. “A choice was made on which photo to submit [to the yearbook]... a choice that excluded Morgyn.”

In her post, Poll shared two photos. In one, 14-year-old Morgyn sits smiling among her teammates. In the other, which had been formatted for Shoreline Junior High School's yearbook to include the year and the school’s name, Morgyn was conspicuously absent. But it wasn’t just the yearbook. Poll claimed that social media accounts belonging to Shoreline Junior High — which have since been deleted — also only shared the team photo that excluded Morgyn.

“Morgyn’s name wasn’t even mentioned as a part of the team,” Poll wrote. “She wasn’t included. She spent hours learning dances, showing up to games, and cheering on her school and friends but was left out.” What’s more, Poll said this isn’t the first time Morgyn has been left out of the yearbook. Two years ago, Shoreline allegedly failed to even include Morgyn in the 6th-grade class list.

While officials from Shoreline Junior High did not return Romper’s request for comment, they issued a statement to KSL TV in which they claimed the exclusion had been a mistake. “We are deeply saddened by the mistake that was made,” the news outlet reported a statement from the school read. “We are continuing to look at what has occurred and why it occurred. Apologies have been made to the family and we sincerely apologize to others impacted by this error.”

Poll said she wasn’t satisfied with the school’s initial reaction. “We contacted the school administration this year, and the answer we got was as ignorant as the photo,” she wrote on Facebook. “To the Shoreline Junior administrator who blatantly said they didn’t know what we were expecting of them & there was nothing they could do: I hope you can take this away — you can be better and I expect you to be better.”

But Poll and her family are choosing to follow Morgyn’s lead: The 8th grader has chosen forgiveness. “My family is choosing to follow Morgyn's example of forgiving,” she told Fox 13 News. “And just learning from this experience so that we can be better... that we can move forward and we can learn to be a better advocate. Not only for Morgyn, but for those other students at that school and in our communities."

With yearbooks already printed and distributed, there’s little hope of Shoreline’s error being fully corrected, but Poll hopes sharing her sister’s experience might prevent someone else from experiencing the same feeling of exclusion. “I hope that no one ever has to experience the heartbreak that comes when the person they love comes home from school devastated and shows them that they’re not in the picture with their team,” she shared on Facebook. “I hope that no one ever has to explain why people deliberately choose to be exclusive.”

Poll urged others to make a conscious effort to be more inclusive. ”Please, be the one person whose actions are inclusive. Be the person who stands up for what’s right and makes a difference,” she urged. “Teach those around you, kids and adults, to look around and see the Morgyns being sidelined.”