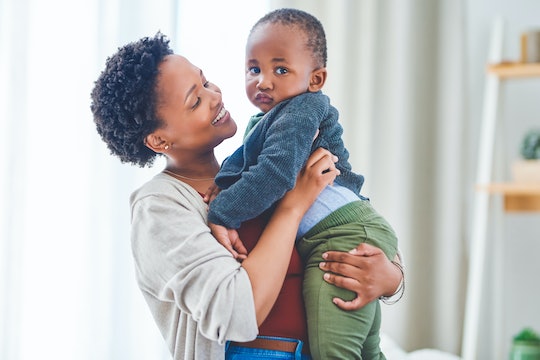 Weaning Really Shakes Things Up — & Can Even Make You Feel Pregnant

When I weaned my first child, I did so kicking and screaming. He was on the boob for a long time — almost two years. However, I really wanted another baby, and my periods were all over the place depending on how much he nursed. Conceiving wasn't going to happen without weaning him. Because it was a gradual process, I thought I was home free from any negative weaning symptoms, but I was wrong. I was depressed, achy, and felt hungover. Some moms even report pregnancy, PMS-like symptoms, or even just feeling pregnant after weaning. But what does it all mean?

Experts say pretty succinctly that weaning does a number on your body. And looking at this list of symptoms, and how they affect weaning mothers, you will most likely find some that were a part of your pregnancy and are giving you those same vibes.

There is a sharp difference in the hormones in your body between the period of breastfeeding and weaning, and those hormones are responsible for many of the symptoms that arise upon the cessation of breastfeeding. Weaning brings on changes, both emotional and physiological, that are brought on quickly and are also symptoms of early pregnancy.

As if you don't have enough on your plate as a (relatively) new mom.

“One of the most common symptoms that I’ve noticed parents experience when they wean is actually a form of depression,” Duhaney says. Among pregnant women, 7% experience symptoms of depression. While Duhaney says that this symptom is usually temporary, if depression becomes debilitating, reach out to your healthcare provider for psychological and emotional support to help with navigating this difficult time.

“When you’re breastfeeding, you are burning extra calories. When you stop breastfeeding, that extra calorie burn that you were getting from lactation goes away,” says Duhaney. At which time she says the metabolism slows down because of the drastic hormonal changes. “But those are temporary. Once your hormones regulate and your body figures out what’s going on, then your body should return back to your pre-pregnancy metabolism ideally, but everyone’s different, and everyone responds to changes in the body differently.”

Every mama has felt the “moodies” at some point while growing your little human. Don’t be surprised if these feelings return when you’re weaning.

“When breastfeeding ends, prolactin and oxytocin levels go down and this may affect mood,” says Jordan Rush, OB-GYN. But there’s a light at the end of the tunnel because Rush says, “This only lasts a few days.”

Breast pain is also a symptom of early pregnancy since they are growing and preparing to be a food source for your baby. But what happens when you’re weaning?

“Protein, sodium and iron content increase 100 to 200 fold, but lactose decreases as milk is no longer produced. This causes the mammary glands to become distended, which causes pain,” Rush says.

When and how you wean is also apparently an important factor. “If you wean cold turkey, then you’re going to have some engorgement. And sometimes you can even get clogged ducts and mastitis because your body doesn’t know that you’re weaning just yet,” says Duhaney.

Women who are forced to wean early often report stronger associations with negative weaning symptoms than women who are able to breastfeed for as long as they choose, noted The Breastfeeding Review. If you are in a position of having to abruptly stop breastfeeding, it’s important to protect your breast health. To avoid mastitis, Duhaney suggests you use pumping as a method to gradually ease into weaning by decreasing the frequency or lengthening the amount of time between sessions.

“Another thing that makes it even trickier in wondering if you're pregnant is that while you're breastfeeding, and even during the weaning process, you can have some period irregularities,” says Duhaney. During this time of hormones adjusting, it’s common for periods to be absent or sporadic depending on the person. She says it’s important to know that although these symptoms can be confusing (wondering if you’re pregnant or nah) they are normal during weaning. But, it doesn’t hurt to take a pregnancy test if you’re not sure because the symptoms do mirror each other.

This was true for me with my daughter. While I had mostly gone back to a normal 30-day cycle while she was nursing, the minute I weaned, not only did I skip a period, my periods came erratically for a few months afterwards. It took about four months to go back to normal.

During weaning, you can feel a loss of that close connection you’ve shared with your baby. “When you begin to wean, prolactin levels drop and this is what’s probably responsible for depressive symptoms, but this is self-limited, will resolve on its own, and only lasts a few days,” Rush tells Romper.

Depending on how long you breastfeed, these symptoms could be better or worse for you, and yes, many of them mimic pregnancy. It's frustrating, but at least it's temporary. However, if you really feel pregnant, it doesn't hurt to take the test. Who knows? You might be repeating this process again in another 18 months. Don't worry, this article will still be here when you need it then, too.

This article was originally published on March 20, 2018