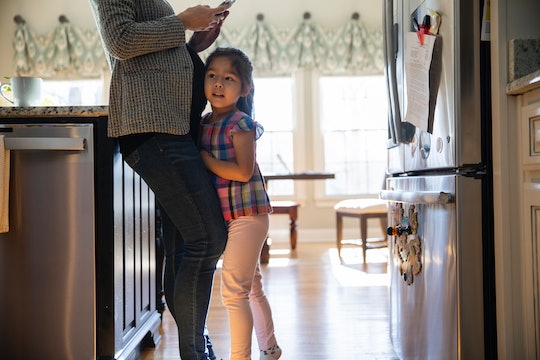 This Could Honestly Be One Of The Weirdest Pregnancy Symptoms

Pregnancy can be strange, my friends.

When you’re pregnant, you can expect to feel a whole lot of action coming from your belly. In the earlier months, you’ll probably sense a wispy type of fluttering, which is one of the first signs of baby movement. But all those sweet butterfly kisses will eventually be replaced by karate kicks to your kidney, bladder, or ribs (or all of the above). One feeling you might not expect to feel is a beating sensation coming from your belly, but don’t worry: feeling your pulse in your stomach when pregnant is totally a thing.

Chances are, you’ve probably felt that thumping in your stomach in the past when you weren’t pregnant and not even realized it. Why? Well, because when you’re expecting, so much attention goes towards your belly that you’re much more likely to pick up on that pulsing feeling, according to Penn Medicine. And even though it might make you freak out at first, the pulse you’re feeling isn’t a bad thing at all.

So, What Is The Pulse In Your Stomach?

Even though baby isn’t here yet, you probably feel like they have taken up your whole heart. But is it an actual heartbeat you’re feeling, or something else? "Pregnant women can feel the baby move and can also feel their own heartbeat in their abdomens,” Dr. Susan Klugman, MD, director of reproductive and medical genetics at Montefiore Health System and a professor of obstetrics & gynecology and women's health tells Romper. “But the feeling of one’s own heartbeat is actually the pulse of their own abdominal aorta.” The abdominal aorta enters the abdomen via the diaphragm, and then travels down to the umbilical part of your body, per Very Well Health. It then becomes the left and right iliac arteries, which supplies blood to the pelvic, reproductive organs, and medial part of the thigh, according to a PubMed study. And that pulsing sensation you’re feeling? That’s the rate at which your heart is beating, the University of Michigan Medicine reported.

What Else Could The Pulsing In Your Stomach Be?

While the pulsing sensation might be a result of your own artery pumping blood, that’s not the only reason you’re feeling what seems to be a heartbeat. “Yes, the pulsing could be the uterine arteries or arteries around the umbilicus that flutter or pulsate,” OB/GYN Dr. Kim Langdon, MD, tells Romper. “But it could also be gas or fetal movement that triggers such sensations.” If that’s the case, you might find that the feeling stops after you move, or go to the bathroom.

But Can You Feel The Baby’s Heartbeat When You’re Pregnant?

In a word, no, says Dr. Langdon. If you don’t believe it, just count the pulse rate, which should easily explain what you’re feeling. "The fetal heart rate is generally 120-160 beats per minute," Dr. Klugman explains, "whereas the maternal is usually 60-100 beats per minute." With some simple math, you’ll see that anything 100 bpm or below is your heart rate, and not your baby’s.

At What Point Can You Feel The Pulse When You’re Pregnant?

Really, you can feel your pulse in your stomach at any point — it’s just that most people don’t think to check their belly for a pulse. But if you believe that you’re feeling a pulse in your belly more during pregnancy, you’re probably right. After all, the body produces about 50% more blood during pregnancy, according to a PubMed study. And with all that additional blood being pumped through your body, you’re definitely bound to feel your abdominal aorta working overtime.

Dr. Klugman says that while there's "not a specific time in which this occurs, it rarely occurs very early in pregnancy" and is sometimes easier to feel "when laying down or after eating." That makes sense, since your body pumps extra blood to your belly after you’ve eaten to help digest food and absorb nutrients, causing you to feel pulsating in your lower abdomen during pregnancy. Crazier still, you might actually be able to see your stomach pulsating when you’re not pregnant by lying down and raising your knees.

Is A Pulsing Sensation In Your Belly Safe For Baby?

For the most part, feeling a pulse in your belly during pregnancy is safe for both you and baby. “It has no effect on the baby unless the mother experiences other symptoms such as lightheadedness,” explains Dr. Langdon. It isn’t a sign of distress; in fact, it shows that your body is doing its job by pumping blood to and from your belly.

When Should You Be Concerned About Feeling A Pulse In Your Belly?

Feeling a pulse in your lower abdomen when you’re pregnant might be a little weird, but it shouldn’t be something to worry about. “Most of the time it’s normal, but it depends on what’s causing it,” says Dr. Langdon. “If it’s associated with any other symptoms, like shortness of breath or chest pain, you should seek medical attention immediately.”

If you feel a heartbeat in your stomach, it’s most likely your abdominal aorta doing its job during your pregnancy. And just know that even though that pulsing sensation doesn’t mean you can actually feel your baby’s heartbeat, it’s beating strong inside of you.

This article was originally published on Oct. 22, 2018