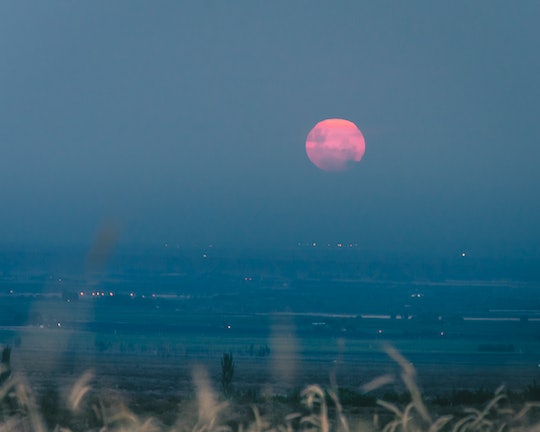 Everything You Need To Know About July’s Full Buck Moon

It’s time to go buck wild, because the Buck Moon is coming. If Buck Moon sounds like the name of one of your Grandpa’s old pals from the Shriner’s Club, well, you’re probably not wrong. However, Buck Moon is also the name for July’s full moon, one of 12 full moons (and two supermoons) lunar lovers can enjoy this year.

It’s not one to miss. The Full Buck Moon, as it’s typically called, takes its name from the Colonial and Native American tradition of naming moons after seasonal phenomena; in this case the time of year when bucks (ahem, deer) grow their antlers, according to the Farmers’ Almanac.

That said, sometimes you might hear July’s full moon referred to as the Thunder Moon because those storms tend to be so frequent this month. Wanna go really crazy? Just call it the Thunder Buck Moon. That’ll get some stargazers outside on the 23.

Humans have been fascinated by the moon and lunar cycle in general since A.D. 150. Greek astronomer Ptolemy believed that the moon and the sun orbited Earth, according to the website LunarLand. This idea stuck around for some 1,300 years before the Polish astronomer Nicolaus Copernicus came up with the correct understanding that Earth and the other planets revolve about the sun, and the moon orbits Earth. By the dawn of telescopes, Italian astronomer Galileo di Vincenzo Bonaiuti de' Galilei was able to describe surfaces on the moon and our obsession with all things la luna only increased from there.

What does a full moon mean?

Scientifically speaking, a full moon represents a point in the lunar cycle when the moon is opposite the sun in its orbit around the Earth making its sunlit side entirely visible from Earth, according to Earthsky.org. This is what makes it look so brilliantly full and round and typically lasts for two to three days.

Each of the 12 full moons this year (CNN reports that last year had 13 full moons due to two in October) goes by a different name.

They are as follows according to The Old Farmer's Almanac:

What is a Full Wolf Moon?

The full wolf moon is the name given to the first full moon of the year, according to the Old Farmer’s Almanac. It takes its name from wolves that would whole in hunger outside Native American villages. But it’s not limited to North American traditions. The moon appears in folklore from many places around the world, including German and Scandinavian mythology, the site goes on to say.

What is the Full Snow Moon?

The Snow Moon, which will be visible February 27, not surprisingly takes its name from snow often found in certain parts of North America during that season. However, “some North American tribes named it the Hunger Moon due to the scarce food sources and hard hunting conditions during mid-winter, while others named it the Storm Moon,” timeanddate.com says.

The Farmers’ Almanac says this year’s Snow Moon will reach peak illumination at 3:19 A.M. EST, so set an alarm now.

What is the Full Worm Moon?

The beauty of the full moon names is they each indicate something seasonally important. Take the Full Worm Moon which will be visible beginning 2:48 PM EST on March 28. This moon got its name because of earthworms, those all important bugs that, to Native Americans, signaled the end of winter and beginning of spring, according to the Farmers’ Almanac.

What is the Full Pink Moon?

Also called the “Full Sprouting Grass Moon, the Egg Moon, and among coastal tribes the Full Fish Moon (named for the season when fish begin to spawn), April 26’s Full Pink Moon is in homage of the return of the spring growing season, specifically the pink herb moss that sprouts this time of year," Farmers’ Almanac reports.

What is the Full Flower Moon?

May 26, 2021 marks the Full Flower Moon. And that may sound all sweet and innocent, but this year it might take on a different name: Super Blood Moon, NJ.com says. Whoa, that escalated quickly.

Blood Moons are what happens when a full moon takes place at the same time as a total lunar eclipse, Express.Co.UK reports. “The change in color happens because the light from the Sun is being bent when it passes through the Earth’s atmosphere,” the publication says. So cool, right?

What is the Full Strawberry Moon?

On June 24, the full Strawberry Moon will make its appearance. So, NASA says, mark your calendars for Thursday, June 24, 2021 14:40 EST. As you might have guessed by now, the moon takes its name from June-grown strawberries.

What is the Full Buck Moon?

The Full Buck Moon — slated for July 23, 2021, doesn’t mean you’ll be seeing a buck standing in the shadow of the moon. No, it got its name from the season when buck’s antler buds begin to grow. And because July is such a big season for flora and fauna growth, it’s also been called Raspberry Moon and Ripe Corn Moon.

What is the Full Sturgeon Moon?

I’m particularly fond of this title as it’s all about sturgeon, one of the most primordial fish species known to man. These lake beasts that can live for nearly 100 years and grow to enormous lengths were found to be easy to catch in Great Lakes and Lake Champlain at this time, and that’s why Native Americans gave this lunar cycle its name, says Farmers’ Almanac, You can see it on August 22 this year.

What is the Full Harvest Moon?

Of all the moon names, this one will likely sound most familiar. September means harvest time and thus this full moon got its name. And it all happens on September 20.

What is the Full Hunter’s Moon?

Ask any hunter and they’ll tell you, October is prime hunting time thanks to the fattened up game running around the forests. It was true pre-European contact and to this day. So on October 20 this year, go and and celebrate the Full Hunter’s Moon.

What is the Full Beaver Moon?

The retreating of animals into winter quarters had to be a signal to Native Americans that the time to prepare for winter was upon them. So they took their cues from animals like beavers, who at this time in November build up their lodges and hunker down for the winter. November 19 is when this moon rises in 2021.

What is the Full Cold Moon?

December 18’s Full Cold Moon sounds pretty self-explanatory. December is, well, cold. But the December full moon wasn’t limited to this name. Other tribes referred to it, according to Farmers’ Almanac as, “Hoar Frost Moon,” “Popping Trees Moon,” and “Drift Clearing Moon” to name a few.

How to get a great view of a full moon?

You can look straight up at the sky and be able to see each full moon clearly (barring any significant weather disruptions), NASA says. But if you want to get a really great look, peer through a telescope and you just might be able to spot more specific features on the moon’s surface, like The Sea of Tranquility.

If you can’t get outside or have other obligations, check out Italian astrophysicist Gianluca Masi’s Virtual Telescope Project free webcast, which often airs live full moon viewings for virtual lunar enthusiasts.

This article was originally published on Jan. 28, 2021