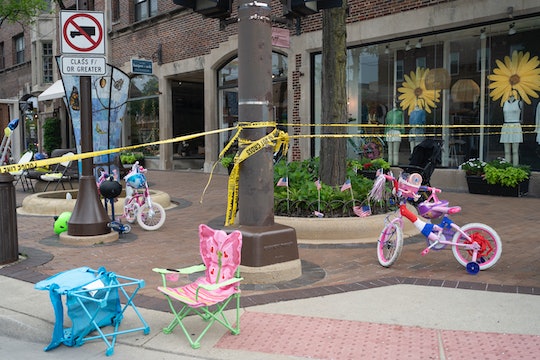 Nicholas Toledo was watching the Fourth of July parade in his wheelchair.

It was meant to be a perfect family afternoon for the Toledo family in Highland Park, Illinois on Monday. They all went together to watch the parade to celebrate the Fourth of July, along with grandfather Nicholas Toledo, who was visiting from Mexico when a lone shooter opened fire on the crowd and killed at least seven people, including Toledo. As authorities work to piece together details of this horrific tragedy, Toledo’s granddaughter shared with the media that Toledo saved his family.

Toledo had joined his family along Central Avenue in the Chicago suburb to watch the parade. Moments before he was killed he had been enjoying one of the marching bands playing music, his granddaughter shared with NBC News. “He was so happy,” Xochil Toledo told NBC News. “Happy to be living in the moment.”

Toledo did not initially want to join the parade, Xochil told The New York Times, as he had disabilities that required him to be with people at all times. But his family wanted him to be there so badly they even went to the parade route the night before to set up chairs for the best viewing spot.

The day of the parade, Toledo was in his wheelchair between his son and nephew when shots rang out, The New York Times reports. At first the family thought it was part of the parade, but sadly it was not. Toledo was shot three times, killing him at the scene. Xochil’s father tried to shield Toledo from the shooting and was shot in the arm himself, while her boyfriend was ultimately shot in the back. But they survived, she told NBC News, and she credits her grandfather with saving their lives.

“He was the one who saved all of our lives. It would have gone to me, my boyfriend or my cousins,” Xochil told the news outlet.

The grandfather was one of the first victims of the Highland Park shooting to be identified. Jacki Sundheim, a local synagogue worker, wife, and mother of one, was also killed. Five more victims have yet to be identified. As of Tuesday afternoon, authorities confirmed that seven people were killed and dozens more were injured in the attack, according to ABC News, with the youngest person injured being just 8 years old.

A GoFundMe has since been created by the Toledo family to help with medical and funeral expenses.