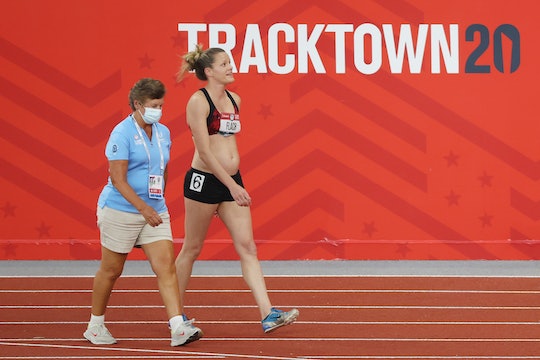 “I was going to the tryouts and I was trying to keep it on the down low.”

I could barely stay awake for more than three hours at a time when I was pregnant, but heptathlete Linday Flach competed at the Olympic trials while she was 18 weeks pregnant. So I guess if we are giving out medals, she should go ahead and get hers right now. Flach was in Eugene, Oregon on the weekend, competing in track and field events for the U.S. Olympic trials ahead of the rescheduled 2020 Olympic Games in Tokyo this summer. And while she finished in last place for all seven of her trials against 14 other women, her trials were something of a triumph. Because she did it all with a visible baby bump as a pregnant woman, expecting her first child later this year.

Flach had initially trained for the Olympics in 2020 after placing ninth in the 2016 Olympic trials, quitting her job at the beginning of the year and moving 250 miles south from Wisconsin to train at the University of Texas and hopefully land herself a spot on the U.S. Olympic team. COVID-19 changed all of that. Flach told Yahoo Sports that she decided to stop putting her life on hold, married her boyfriend and got pregnant. When the Olympic trials came around again, Flach decided to try out even though pregnancy was sapping her strength. “To be honest, I was going to the tryouts and I was trying to keep it on the down low,” Flach told TODAY Parents, “because I just wanted to finish my career on my terms.”

Lindsay Flach went to the Olympic trials while pregnant.

She certainly managed to do that, competing in seven incredibly difficult events like the 100-meter hurdles, high jump, shot put, 200-meter sprint, long jump, javelin throw, and 800-meter run, all during a heat wave. Social media users praised Flach when she shared a short video of herself preparing to race, writing messages like, “You absolute legend! Well done! thank you for showing the world that pregnant woman are strong and capable,” and “I love it! Showing the world how strong pregnant women are!”

Still, it was a difficult moment for the expectant mom. “It was bittersweet,” Flach told Yahoo Sports. “I was really excited because I’ve always wanted kids, but it was also a shock knowing that just like that, my track career was over.”

Her track career might be over, but boy did Lindsay Flach end on a high note.