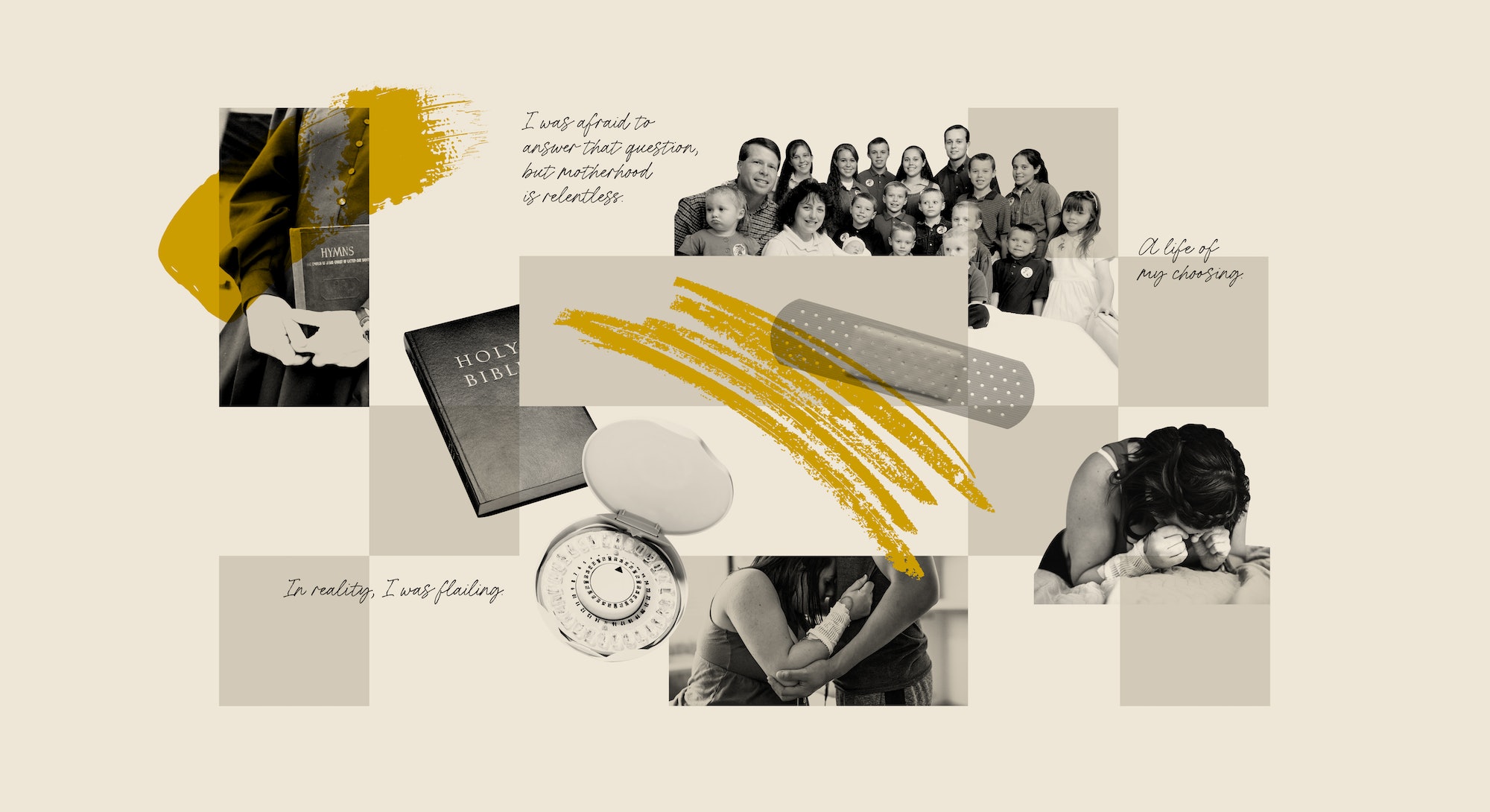 How Being Quiverfull Almost Killed Me — And Still Saved My Life

"I was 9 years old when I decided that I wanted a dozen babies."

I was 9 years old when I decided that I wanted a dozen babies. We lived in a filthy trailer, and I looked around and knew I wanted more, not only because we were poor but because I was often alone. Raised by a working mom, and desperate to be seen by an absent, addict father, I’d have sold my soul for what I imagined was a functioning family. A happy family.

Later, when a friend from church introduced me to the Quiverfull movement — which believes children are a blessing, and therefore, women should have as many as possible — it made perfect sense. My church friend suffered from infertility and didn’t have kids, and I think, to some extent, I took on a self-imposed guilt that I could have children. She said it was my duty, and I couldn’t argue with someone who dreamed of doing something that came easy to me. On the precipice of adulthood, I was a prime candidate for what I believed the Quiverfull movement would deliver.

I had my first baby at 20 years old. I had my second at 22. Another at 24, 26, 28, 31... until our 1,200-square-foot home was, as you can imagine, bursting at the seams. That prickly conscience of mine said I was in over my head, but still louder was an inner voice that screamed the only answer to the gaping wounds of my childhood trauma was to have babies to heal the little girl in me that so desperately wanted to be loved.

In reality, I was flailing.

I devoured episodes of 19 Kids and Counting (they only had 16 kids when I started watching), and I’d read their books, as well as many others on the subject. Every source I watched or read seemed to portray a much different picture than my experience. Large families on field trips, executing organizational systems, playing instruments, and enjoying dinner around the table. I perceived it as a portrait of perfection, a godliness I’d achieve if only I opened my womb without question. So I did, again and again. But none of it was as glamorous or restorative as I’d hoped.

It took until baby No. 5 for me to begin seriously questioning my motives. I knew they went deeper than desiring children. I wondered why I only experienced a sense of fulfillment if others needed me. What was wrong with me? I was afraid to answer that question, but motherhood is relentless. It tells us what we never wanted to know about our own inadequacies, our tarnished mindsets. If motherhood is anything, it’s honest.

The truth is whether any of us have one child or 10, parenthood exposes the hidden parts of ourselves we’d rather not acknowledge.

As I held a positive pregnancy test for baby No. 6 in my hand, I cursed under my breath. I broke down in my husband’s arms and wept. Already I was steeped in chores, in schooling, in five young children who soaked up my time like a dry sponge. Every trimester was a challenge, my separated hips buckling beneath the weight of another pregnancy so soon. Later, bent across an oversized exercise ball, white-knuckling a crippling contraction, I knew I never wanted to do it again. No more bleeding out in birth or staying up all night with a colicky baby. No more babies.

But even as I crawled out from beneath a 9-year-old girl’s vow, I woke up to a life of chaos. A life of my choosing. I finally understood that babies and movements were never meant to be Band-Aids — even if they provided a false sense of identity. I learned that absolutely nothing can take the place of therapy when we’re broken, when we wind up on the other side of childhood with the same mindsets we harbored as children.

The truth is whether any of us have one child or 10, parenthood exposes the hidden parts of ourselves we’d rather not acknowledge. The days we disappear into the closet and eat chocolate, scream over a lost shoe, and clench our jaws as we clean yet another puddle of spilled milk. Psychologists refer to the amount of stimulation we can handle as our window of tolerance, and there is nothing like parenting to shrink it to a narrow space, where we live on the edge of explosion and escaping. I’ve been there.

Mothers with fewer children than me have often idealized my family. “How do you do it with all those kids?” they’d ask.

We’re all different, but if we’re parents, our mindsets, fears, and inadequacies are revealed to us daily.

First of all, I don’t have a choice. I show up because I have to, because I’m determined to clean up the mess that began with my own childhood so that my children can flourish and dream beyond having their basic needs met. I also tell the truth about my struggle. It almost killed me... but I didn’t let it. I welcomed the truth, that I couldn’t hold it all without help, and I didn’t allow that truth to invalidate my legitimacy as a human being. I had to erase the notion that I’d only be as healthy as my children were thriving. It was the opposite. My children were only as healthy as I was thriving. This revelation has been the greatest gift of having my world crushed beneath the weight of parenthood, and my children gave it to me. It wasn’t gift-wrapped and propped beneath a tree. No, it was bunched up in sleepless nights, in a laundry pile that never shrunk, in snot and tears and tantrums.

For me, discovering this truth was not a lightbulb moment. In fact, it took years to untangle my worthiness from pregnancy, to admit that six children is actually a big number, and that maybe, it’s OK for me to have a career. These ideologies are the mountains I’ve stood at the base of, and others have their own. We’re all different, but if we’re parents, our mindsets, fears, and inadequacies are revealed to us daily.

Learning to trust myself and discover what I needed to thrive was by far the most difficult part of my journey because my inner voice was confused. I’d never been taught autonomy or emotional regulation. I didn’t know how to value myself. But as I learned to embrace the truth of my struggle and get the help I needed, a new voice emerged. It was me, my authentic self, showing up and choosing a life I was proud of.

I learned that children can’t fix us, even as they reveal what’s already been broken.

If I’m honest, this whole journey has felt like a paradox. It’s not like I’d send any of my children back. They are amazing! But the way I see it, now, is that there was always purpose, and there still is, but it’s not about them. It’s about us thriving as a family, and in order for that to happen, I get to be a part of the equation: my needs, my wants, my dreams, and my healing.

I always understood that having children was a privilege, but I didn’t know how to give myself permission to believe for anything beyond motherhood. When I finally realized that my children were not my identity, I was free to find myself and be the mother I always wanted to be. I learned that children can’t fix us, even as they reveal what’s already been broken.

Sometimes I still find myself in this place, but it’s not as scary now. I remember to breathe. I take a bath or read a good book. I embrace my life as it is, and always, I thank my children for showing me the way.