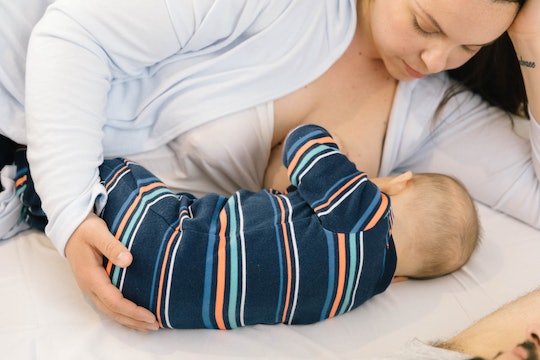 Here's How Breastfeeding Affects Ovulation & Your Chances Of Getting Pregnant

When I was doing my research to figure out if I was planning on breastfeeding or not, I of course noticed a lot of pros for both mom and baby. For some women, an additional perk of breastfeeding to all the other benefits for moms is that you don’t start your period — and some moms even think of it as a form of birth control. How accurate is that? How does breastfeeding affect ovulation, and can you still get pregnant while breastfeeding? Whether you're hoping to get pregnant again ASAP or you're trying to avoid pregnancy like the plague, this is really important information to know.

I asked Dr. Jamil Abdur-Rahman, OB-GYN and one half of the Twin Doctors for TwinDoctorsTV how breastfeeding affects ovulation, and he explained to Romper most women do not actually ovulate while they’re breastfeeding for the first three to five months after having their baby. “While ovulating, women's pituitary glands produce a hormone called prolactin. Prolactin, as its name sort of implies, promotes lactation. While promoting lactation, prolactin also inhibits the release of Follicle Stimulating Hormones (FSH) and Gonadotropin Releasing Hormones (GnRH). FSH and GnRH both work to help a woman's eggs to mature and then be released through the act of ovulation. So, when prolactin levels are high and FSH and GnRH levels are low, they tend not to be fertile.

However, Abdur-Rahman adds, “On average, women who exclusively breastfeed will resume ovulating within nine months of delivery while women that breast and bottle-feed tend to resume ovulation about five months after they've delivered.” And because you’re not ovulating, that’s why you don’t start your period. “To have a period, a woman needs to ovulate because it is when they ovulate that they produce progesterone. Progesterone is the hormone that ultimately causes the uterine lining to be expelled at the end of a cycle if pregnancy has not occurred. And it is the expulsion of this lining, along with some blood, that results in a period,” Abdur-Rahman says.

And as far as using breastfeeding as a form of birth control, it’s definitely risky and Abdur-Rahman says you can absolutely get pregnant if you’re still breastfeeding, especially if you’re doing it for more than five to nine months. “This is because they are likely to resume ovulating after that period of time. And the problem with waiting for a period to come to know that you are fertile again and should resume some form of birth control is that ovulation will resume two weeks before the first period occurs,” Abdur-Rahman explains. “So the first period will be preceded two weeks earlier by ovulation and the release of an egg. If this first egg is fertilized, a breastfeeding woman will become pregnant before she ever has her first post-pregnancy period. So in the two weeks preceding the first period, and every month after that first period, a breastfeeding woman can get pregnant.” Yikes.

So if you’re looking to not get pregnant while you’re still breastfeeding, you probably shouldn’t use it as a form of birth control. But if you are hoping to get pregnant sooner rather than later, just remember, in those first three to five months of breastfeeding, you’re probably not going to ovulate because prolactin affects other hormones in your body that are responsible for maturing and releasing eggs. You’ll probably start ovulating again around nine months.

More Like This
Can You Burp A Baby Too Hard? A Pediatrician Shares Tips For Gassy Tummies
My Fertility Journey Began In A Cold Doctor’s Office, But It Was Also Weirdly Romantic
Yes, It’s Possible To Get Pregnant If You Have An IUD
Pelvic Pain During Pregnancy: What Causes It & How To Deal With It

This article was originally published on Aug. 16, 2019