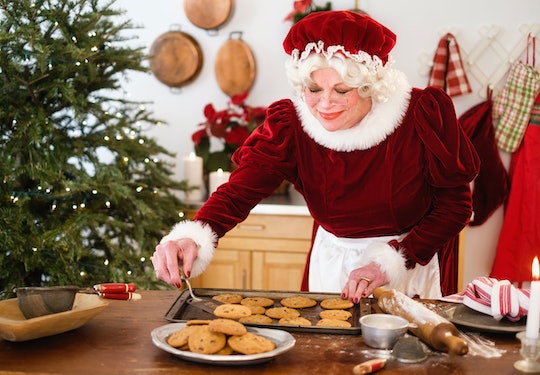 How Old Is Mrs. Claus? There Are A Few Theories

Mrs. Claus is tight lipped about her age.

Although people have become more accepting of the aging process (afterall, age is just a number and you can’t control getting older) it’s still a bit taboo to ask about someone’s age. But when you’re a wide-eyed child, you can get away with a lot, including this somewhat nosy inquiry. Specifically if it’s Christmas season and you want to learn more about the stars of the holiday. And though the bulk of the questions may be about Saint Nick, many kids may ask how old Mrs. Claus is — among other questions about the woman behind the man in red.

There is a lot of information available about the Claus family, but some of it is conflicting. This may make it harder to give your child the definitive answer they demand. You can always use magic as an excuse for differing answers, or try to convince them that Mrs. Claus doesn’t love the spotlight and prefers to keep information private. If those explanations don’t suffice, you can always suggest your child go directly to the source by writing Mrs. Claus a letter or asking next time they see her. After all, they can’t question Mrs. Claus herself.

How Old Is Santa Claus’s Wife?

There is some conflicting information about Mrs. Claus’s age, but one thing that is true across the board is that she doesn’t like to talk about it. (One source says Mrs. Claus stopped counting her age after she turned 170 years old.)

Email Santa, a site with questions answered by Old Saint Nick, claims Mrs. Claus is 1,139 years old (but doesn’t look a day over 1,000, according to her husband.)

Other sources have her blowing out much fewer candles on her birthday cake. Both Yes, Santa Is Real and Mystic Investigations, say Mrs. Claus will be turning 229 this year.

Given that the legend of Santa Claus (and, one can assume, his wife) dates back to 280 A.D., according to the History Channel, Mrs. Claus is likely closer to 1,139 than 229. But, if you want to get on her good side, it may be safer to steer a little younger.

When is Mrs. Claus’s Birthday?

Though Mrs. Claus’s age is heavily debated, her birthday is not. According to multiple sources, Mrs. Claus was born on December 25 — i.e. Christmas Day. Some may say this a coincidence, but Mystic Investigations writes that her birthday meant she was destined to marry Santa Claus some day.

What’s the Age Difference Between Santa Claus and Mrs. Claus?

Again, based on the history of Santa Claus, the 600-plus difference makes more sense. But we will never know for sure: Another North Pole mystery that will keep us in wonder for years to come.

More Like This
Try These Beautiful DIY Valentine's Day Nail Designs
The Best Heart Nail Designs For Valentine’s Day
Valentine’s Day Photoshoot Ideas For Your Little Cupid
When Do We Spring Forward In 2023? Mark Your Calendars
What Parents Are Talking About — Delivered Straight To Your Inbox