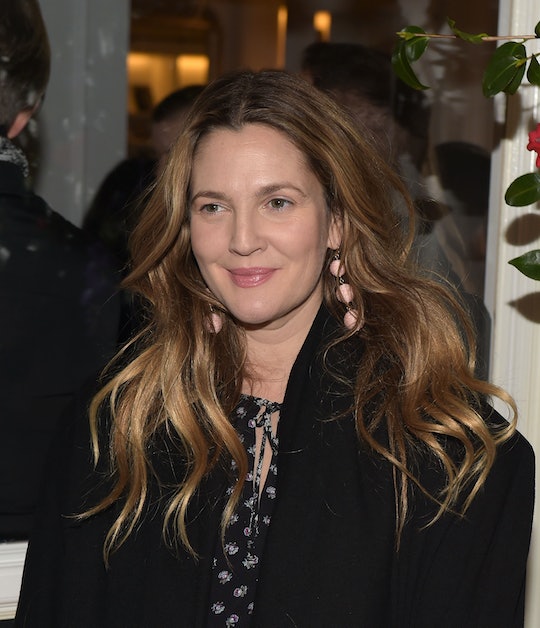 Drew Barrymore strikes me as one of those women who has lived about a thousand lives within one life. She was a child actress from Hollywood royalty, a famously rebellious teen, a horror movie icon (please all of us take a moment to worship at the altar of her iconic Scream cameo), a rom-com queen, a mom. And here's the most amazing part: I get the feeling she brings all of the wisdom borne from all of those lives into her parenting. For instance, Drew Barrymore is teaching her daughters about aging in the most evolved way, and honestly I would never expect less from this wise woman.

The Santa Clarita Diet actress and Flower Beauty founder is the mother of two daughters, 6-year-old Olive and 4-year-old Frankie, with ex-husband Will Kopelman, according to Entertainment Tonight. She was recently the cover girl for NewBeauty's spring issue, as People reported, and she opened up about her shifting concept of beauty and aging in recent years. Because as most of us know all too well, motherhood has a way of changing your perception of these types of things. Has a way of making you really consider how you want your children to perceive beauty and aging instead of just the way you see it yourself.

As Barrymore noted in the interview with NewBeauty, she's paying closer attention to how she wants her daughters to look at aging. Instead of seeing it as something of a hassle, she wants them to see it as a "luxury," according to NewBeauty.

"I’m now determined more than ever to show my daughters that aging is a luxury. If we’re lucky, we are all going to age. I just want them to be at peace with who they are and not what they look like," she told the magazine.

She also has some pretty solid feel-good tips for her daughters... and everyone else in the world. To put it simply, just don't be "an A-hole," as she told NewBeauty.

"I’ve realized that even when the little things aggravate you and seem really big and monumental, or even very public within your own circle and you just wish you could hide your problems, you just can’t lose your cool," she told NewBeauty. "Be nice through all of it."

This isn't the first time Barrymore has shared a powerful lesson she's teaching her daughters. Back in 2018, for instance, she told Working Mother that she wants her daughters to understand that work can be a joy instead of a chore that takes you away from them.

"I realized a lot of us tend to do that to try to make our kids feel better and that work is the yucky thing taking us away ... I want to empower my daughters to think work is good and necessary. And can even lead them to the road of their dreams," she told Working Mother.

Barrymore's lesson to her daughters that aging should be considered a luxury, rather than something to dread, is actually sort of a game-changer. Especially considering the fact that she works in an industry that continues to struggle with the concept of aging (dare I say, specifically with women, as noted in this article from The Guardian article). She's teaching her daughters something that most of us adults have a tough time understanding. Teaching them that life is a gift, that aging is something you should aspire to do rather than fear it like the black plague.

This mom seriously has the wisdom of basically thousands of moms. Let's all just copy her.