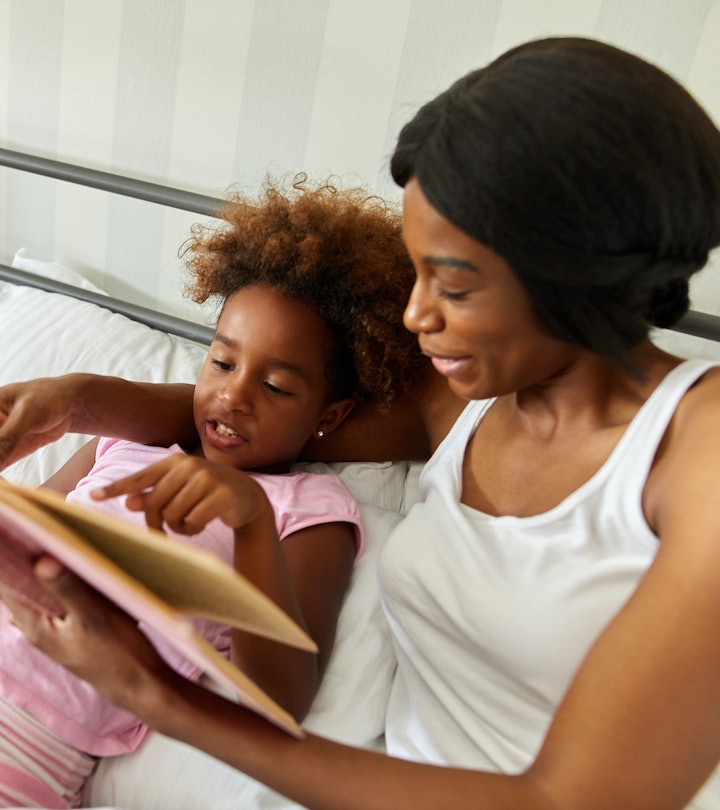 How To Explain International Women's Day To Kids

Because it’s a pretty big celebration.

International Women's Day is more than just a day to feel inspired and empowered; it's a day to remind your children — girls and boys — that women matter, that women are important, and that women deserve to be recognized. And knowing how to explain International Women's Day to your child — how to bring it up, how to highlight its importance, how to explain why it’s still necessary — can be a bit confusing. Maybe you're worried that your kids will ask why the world doesn't celebrate women every day. Maybe you're nervous that your son will ask when he gets to celebrate being a man, and then you'll have to refrain from making a Samantha Bee joke. Maybe you're just not sure how to approach the topic of sexism, of the patriarchy, and of the importance of feminism right now.

But hey, it's time. And there's no better way to start those conversations than by explaining International Women's Day to your child.

Originally created in the early 1900s, International Women's Day, according to the official website, is "a global day celebrating the social, economic, cultural, and political achievements of women." Because the day doesn't belong to any specific group or government entity, it's the perfect way to celebrate all women from all walks of life and to unite them together to reflect on the strength and perseverance of women.

If your children are old enough to go to school, they can probably name a few important figures in history. George Washington, Martin Luther King, Jr., Thomas Edison — all incredibly important to the world, but all men. To begin explaining International Women's Day, ask your children to name some women who have made a difference in the world. Hopefully, they can shout out Harriet Tubman, Malala Yousafzai, Marie Curie, but they may not. And that right there is the lesson in why International Women's Day is so important.

Explain to your kids that there have been times in history, both recent and not-so-recent, when women have made huge contributions to the world and their achievements were not celebrated as much as a man's contributions. Talk about the challenges women face, like having to balance motherhood and work (when men aren't expected to juggle both) and having to fight stereotypes. Explain that when a woman is misheard in the boardroom and tries to speak up, she's often called "bossy" or "loud" or "rude." Teach them that for a long time, society valued a woman based on how well she could birth children and run a home, but that men were expected to make the bigger contributions to society. Talk about the women in their life that have influenced them and how their stories are often lost in history.

And combine all of that information into a succinct explanation: much like a birthday that is all about one person, International Women's Day is dedicated to all women. It's to celebrate the lives and achievements of women, whether they've been recognized for it or not.

If you need a starting point, I highly recommend picking out some books to read with both boys and girls. These are just light enough that they’ll hold your child’s attention span, but are complex enough to inspire them to ask big questions about what these stories mean to women and what’s changed since then. As a mother of two little girls (and a third girl on the way), I am so deeply indebted to these books that gave even me the confidence to speak out for my girls and myself.

She Persisted Around the World: 13 Women Who Changed History
Barnes & Noble
This sweet book comes in both a hardcover and a board book format, and includes 13 stories of women from around the world who never gave up and persevered through the hardest of times. Some notable mentions include Marie Curie, Malala Yousafzai, and Viola Desmond.
'Good Night Stories for Rebel Girls'
Barnes & Noble
This gorgeous collection of stories comes with beautiful illustrations that perfectly capture the women highlighted in the book. From Amelia Earhart to Harriet Tubman to Elizabeth I to Cleopatra, there are really incredible stories of women throughout these pages.
Little Feminist Board Book Set
Barnes & Noble
For the tiniest ones, this Little Feminist board book set is just delightful. Each page features a notable woman, like Rosa Parks and Lucille Ball, and gives a very brief description to introduce your kids to the importance of women's history.

When you put International Women’s Day into a perspective like the books above, your kid should understand. Like blowing out the candles on a birthday cake for their grandpa and sharing stories of his life to celebrate him, let International Women's Day be explained as a giant birthday for all the women of the world. Blow out some candles, appreciate those women, and feel grateful for another year of celebrating them.

More Like This
From Captions To Gifts, These Are All The Kindergarten Graduation Ideas You Need
17 Best Potty Training Products For Toddlers
These Stepmother's Day Instagram Captions Are Straight From The Heart
First Look: The New Jujube x Lilo & Stich Collaboration

This article was originally published on March 5, 2017