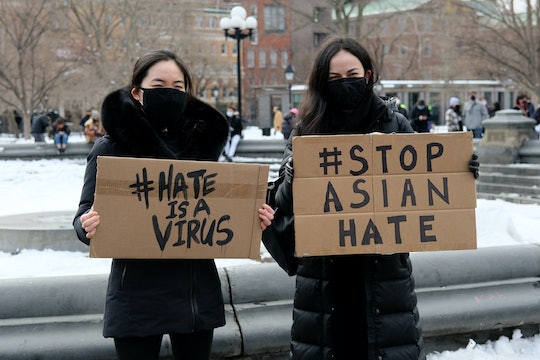 “The more people know, the more change we can make.”

The past year has been especially difficult for the Asian American community. Reports of racially motivated attacks and harassment have shocked the nation, looking for ways to help and support the Asian American community. As parents, we need to be especially aware of how best to involve our kids because stopping racism starts at home — and starts young.

In January, several videos shared on social media showed violent attacks against elderly Asians and Asian Americans in the San Francisco area, according to The New York Times. And sadly, on March 16, eight people were killed, including six Asian women, during a string of shootings in Atlanta at several day spas, Reuters reported.

A report from Stop AAPI Hate, a coalition addressing anti-Asian hate amid the pandemic, found that 3,795 racially motivated hate incidents were reported between March 2020 and February 2021. Incidents involving verbal harassment, shunning, physical assault, online harassment, and civil rights violations like being barred from public transport. And that number continues to climb.

Many have attributed this spike in racist attacks to former President Donald Trump, who insisted on referring to COVID-19 as the "China virus" or the "Kung flu," despite critics consistently correcting him. Even after he left office, Trump continued to call the coronavirus the “China Flu” while taking credit for the “beautiful” vaccines.

While President Joe Biden has issued a directive to fight racism against Asian Americans, reports of hate and violence continue to happen. And for those looking to help, here are a few ways you can support the Asian American community right now.

One of the best ways to show solidarity with the Asian American community is to donate to reputable organizations. Here are some to consider:

You can also support GoFundMe pages, like this one working to raise funds to stop anti-Asian violence for eight separate organizations, which has already raised more than $150,000.

Be Involved In Your Community

In an email to Romper, Michael Nguyen, Senior Policy & Advocacy Associate of the Asian Pacific American Advocates in Washington, D.C., offered some excellent tips on how to get kids involved in supporting the Asian American community.

“Check in with your neighbors,” Nguyen suggests. He also recommends volunteering to escort elders. In Oakland Chinatown, for example, Nguyen recommends getting in contact with compassioninoakland.org and joining the Asian Pacific Environmental Network's community-based response.

“Help raise awareness about these attacks,” Nguyen says, “the more people know, the more change we can make.”

If you are looking for ways to combat misinformation, the Urban Institute has put together a list of tips on how to confront racism on a daily basis. Follow the #StopAsianHate hashtag on social media and share factual posts about hate targeted against the Asian American community. For example, Stop AAPI Hate’s Instagram recently shared graphics from its latest report you can share on your Instagram Story.

Educate Yourselves & Your Family

You can also get kids involved in supporting the Asian American communities by educating them, telling them about the history of this vibrant community with resources like the Smithsonian Asian Pacific American Center. Parents can also buy books like A Kid’s Guide To Asian American History, which includes 70 fun activities aimed at introducing kids to their rich, storied culture. You can also watch movies and television shows about Asian American families, like Fresh Off The Boat and Andi Mack.

Nguyen also suggests learning “more about history of anti-Asian racism” and the “histories of Asian/Black solidarity.” AAOPMN, or Asian American Organizing Project, has shared resources to help guide parents through Asian American/Black solidarity, while the Seattle Public Library has shared tools for students on learning more about the cross-cultural solidarity. “Learn about anti-Blackness in our communities, what racial justice looks like,” Nguyen says. “Anti-Blackness starts and ends at home.”

Being an ally who rejects anti-Asian American rhetoric is important, but it's also important to stand up and report racist acts when you see them. To report a hate incident, check out Stop Asian American Pacific Islander Hate, a website supported by a collective of Asian American organizations in an effort to protect members of their community, or at StopAAPIHate.org.

Encourage your kids to let you know if they see anyone committing acts of violence or cruelty against Asian Americans so you can report them and, what's more, tell your kids that you're reporting on their behalf.

One on four Asian American children reported that they’d been bullied during the pandemic, according to a report released by the Stop AAPI Hate Youth Campaign in September 2020. Asian parents have also reported that their children have experienced racist taunting in school amid the pandemic. Children and their families need allies, and they need support.