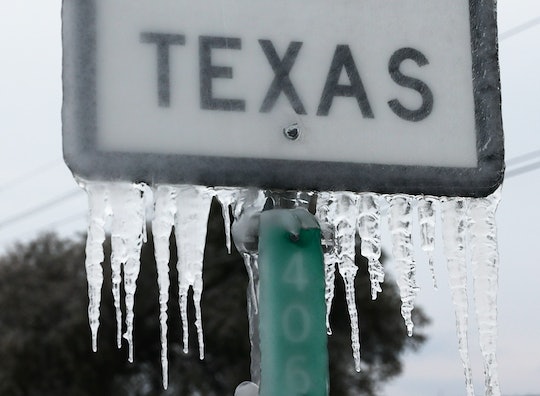 Single-digit temperatures have left many families in Texas without power, heat, or water — here's how you can help.

Between widespread power outages leaving many without heat, unsafe drinking water, food shortages, dangerous and often impassable roads, and flooding homes due to frozen pipes, what began as a severe winter storm in Texas has quickly turned into a humanitarian crisis. Thankfully, there are a number of ways to help Texas families weather this winter storm.

Millions of Texans were left without power and heat earlier this week after snow and frigid temperatures wreaked havoc on the state's independent power grid. Without electricity or heat, many Texans have taken desperate, and sometimes dangerous, measures to stay warm as temperatures dipped into the single digits. Counties across the state have reported seeing a rise in carbon-monoxide-poisoning cases as residents attempt to use cars, grills, gas ovens, and other outdoor use appliances inside to generate heat.

But as if widespread power outages and Arctic temperatures weren't enough, the extreme weather has also disrupted water systems throughout Texas, CBS News has reported. As a result, some areas have had issue boil water notices to residents, many of whom are already dealing with frozen or burst pipes.

According to the Texas Tribune, disruptions to regular supply chains have also led to long lines and bare shelves at grocery stores, putting increasing pressure on food banks that have already been stressed due to the ongoing coronavirus pandemic.

Still, there are ways to help those in need in Texas, even if you live across the country.

Donate To A Food Bank

You can find a list of Texas food banks at Feeding Texas, which allows users to search the banks by zip code. While a donation of any size made to any food bank in Texas will certainly help families who may have lost the only groceries they could afford, Galveston and Houston are reported to have experienced some of the worst power outages, meaning donations to food banks in those areas may be especially needed. You can find a list of zip codes for those cities here.

As temperatures dropped across Texas, state officials urged residents to stay inside as much as possible. But for the more than 25,000 people estimated to be experiencing homelessness in Texas, heading indoors is easier said than done. Thankfully there are a number of organizations working to help the unhoused stay warm, clothed, and fed during the storm. In Austin, the Austin Area Urban League has launched the #LoveThyNeighborTX campaign to provide emergency support to those in need. You can contribute toward their efforts to provide warm shelter, food, water, clothing, and more to unhoused individuals and families through their website.

Additionally, groups like Austin Mutual Aid, Caritas of Austin, and Feed the People Dallas are also working to provide food, support, and shelter to those in need.

Donate To A Diaper Bank

Donations to the Texas Diaper Bank help families with young children who may struggle to otherwise shoulder the high cost of diapers as well as adults who need incontinence or menstruation supplies. The diaper bank also runs a disaster relief program and a parenting education program. The bank puts 94 cents of every dollar donated directly toward its programs.

Organizations like Team Brownsville, Refugee Services of Texas, and Catholic Charities of the Rio Grande Valley work to provide support to refugees and asylum seekers, such as those living in camps just across the border from Brownsville, Texas. The IRC in Dallas and Abilene is also working to aid impacted refugee and asylum families.

Efforts to keep pets and other furry friends weathering the frigid temps in Texas are being carried out by Austin Pets Alive! and the SPCA of Texas. Both organizations are working to provide vital shelter and care for animals despite experiencing power outages, water shortages, and burst pipes at their facilities. You can view an updated list of what Austin Pets Alive! currently needs to continue aiding animals here or donate directly to the organization here. Similarly, donations can be made to the SPCA of Texas through its website here.

With tens of thousands of people without power, Lucille’s 1913, a community kitchen collective powered by Chef Chis Williams, has ramped up its ongoing efforts to provide hundreds of hot meals a day to members of underserved communities in Houston's Sunnyside, Acres Homes, Fifth Ward, and Third Ward. You can help fund their efforts to bring meals to those in need by donating at their website.

To the north, Dream Center Dallas has partnered with Mercy Chefs and Carolyn King Arnold to bring hot meals, produce, and groceries to those in need in Dallas. Donations to help fund Dream Center Dallas' aid efforts can be made through their website.

Boost National Organizations As They Pivot To Focus On Texas

Texas-based chapters of organizations like the Salvation Army and the American Red Cross are working to provide essentials such as warm shelter to those in need. Salvation Army Texas, for example, has opened warming stations at its facilities and added extra beds to its shelters to get as many folks as they can off the street during this week's severe cold weather. The organization is also distributing snacks, and warm gloves and socks. Donations can be made to Salvation Army Texas here.

Chapters of the American Red Cross operating in North Texas, Central and South Texas, and the Gulf Coast region have dispatched trained disaster workers to aid in shelters and warming stations. The organization has also provided shelters with cots, blankets, water, and ready-to-eat meals. Donations to further fund their efforts can be made through any of the chapter's individual websites.