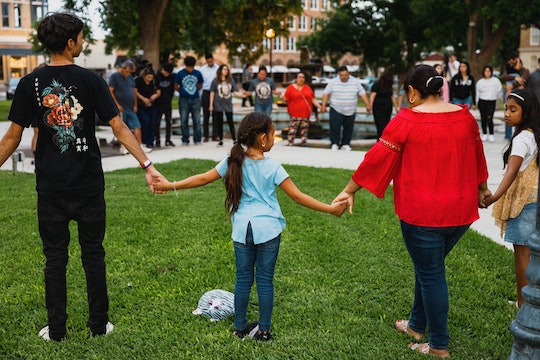 A lone gunman walked into Robb Elementary School in Uvalde, Texas on May 24 and killed 19 students as well as two teachers with a legally purchased gun; he had only just turned 18 years old. This recent shooting, coupled with a senseless attack in a Buffalo supermarket that left 10 people dead and 26 other school shootings that have occurred in 2022, has people calling, once again, for common sense gun control laws. But how do we actually get there? How do we support gun reform in a substantive way rather than merely offering up thoughts and prayers? Here are a few ways to get started right now.

#1. Educate yourself about laws that have worked.

On Tuesday evening, President Joe Biden spoke out about the horrific school shooting in Uvalde and the need for common sense gun laws. “We know common sense gun laws can’t and won’t prevent every tragedy,” Biden tweeted. “But we know they work and have a positive impact. When we passed the assault weapons ban — mass shootings went down. When the law expired — mass shootings tripled.”

Biden was referring to the 10-year federal ban on assault weapons that was passed in 1994. The Public Safety and Recreational Firearms Use Protection Act prohibited the sale and manufacturing of certain military-style assault weapons and expired in 2004.

Further back in 1993, the Brady Handgun Violence Prevention Act introduced background checks for anyone unlicensed who purchased a firearm from a federally authorized dealer. The law required a five-day waiting period for background checks, ensuring people could not just walk into a store and buy a gun without any check whatsoever.

It’s important to pay attention to gun laws that have been effective in the past.

The gun lobby remains a powerful one in America, and it needs to be held accountable for the kind of marketing and promotion it puts out into the world in an effort to get more guns into more people’s hands.

In 2018, the Violence Policy Center noted that the firearms industry was targeting children in their ads, even creating youth rifles for kids. Government officials like Texas Gov. Greg Abbott have openly asked Americans to buy more guns on social media, as he did with this 2015 tweet, “I'm EMBARRASSED: Texas #2 in nation for new gun purchases, behind CALIFORNIA. Let's pick up the pace Texans.” The marketing of firearms is a potent example of our culture’s gun obsession, and we could hold the industry accountable.

#3. Support community plans that include gun safety prevention and intervention.

Research conducted by the Prevention Institute has found that there are some community safety plans that could prove to be effective in preventing gun violence. Communities like Minneapolis have seen success in implementing programs like Blueprint for Peace as well as hospital-based intervention programs, which trains health professionals to identify and aid traumatized patients who might be at a higher risk of dealing with gun violence. But these initiatives need federal funding to help identify and prevent gun violence in communities.

Perhaps one of the most concrete ways a person can work towards supporting common sense gun control is to refuse to let this issue fade into the news cycle. It’s easy to get caught up in the next issue, particularly as there is so much going on in the world, but protecting people, especially children, from gun violence isn’t a fad or a hashtag of the moment. Especially as, according to Everytown Research & Policy, firearms are the leading cause of death for American children and teens.

It’s time to be relentless about calling for change — particularly as we approach this fall’s midterm election. Don’t get distracted.

#5. Put pressure on your local representative.

Even bipartisan common sense gun control legislation like the 2013 bill from Democratic Sen. Steve Manchin and Republican Sen. Pat Toomey to expand background checks on guns prior to sales has not been passed through the Senate. The Manchin-Schumer-Toomey amendment would require mandated criminal checks on guns sold on the internet and at gun shows but not between family members or private sales. The bill did not pass as it failed to get enough votes during a 2013 Senate filibuster.

The only way to push politicians towards actually passing common sense gun control legislation is to contact them. Frequently. Tell your neighbors and family and friends to let their representatives know that gun safety should be one of their top priorities. Put pressure on them and don’t let up until they do something about it.

When politicians receive significant donations from gun lobbyists, they need to be called out and reminded that their “thoughts and prayers” are not enough, not anymore. Politicians who take money from the National Rifle Association (NRA), which has openly lobbied against any and all gun control for decades and even refers to itself on the NRA website as a “major political force,” need to be held accountable for their affiliations and how that support affects their voting record.

The Centers for Disease Control and Prevention (CDC) was finally given federal funds to research gun violence as a preventable public health problem for the first time in 2019, and this change was significant. Rather than engaging in a political back-and-forth about mental health vs. gun safety every time another mass shooting hits the news, the CDC can now change the conversation to remind Americans that gun violence is, indeed, a public health concern.

Pew Research notes that four out of 10 American households have a gun in the home, and that number has risen since the beginning of the Covid-19 pandemic in 2020.

A number of organizations been tirelessly fighting for years to help prevent gun violence through research, advocacy, and more. Below are a few to consider giving your money to:

The Coalition to Stop Gun Violence: Founded in 1974, one of the oldest gun violence prevention organization in the United States “develops and advocates for evidence-based solutions” to stop gun violence.

The Brady Campaign: Also founded in 1974, this nonprofit organization runs several programs, including a youth-led initiative to help educate young people about gun violence and how to stand up against it.

#9. Allow family doctors to ask about firearms in the home.

The American Academy of Pediatrics (AAP) recommended in 2017 that pediatricians and family doctors should be allowed to ask if there is a firearm in their patient’s home. In an effort to prevent unintentional gun injury, of course, but also to ensure the safety of children living in those homes. A pediatrician’s right to ask about firearms in the home has been called into question, most notably by the “physician gag law” in Florida that would have limited screening for firearm access in the home. Pediatricians fought that law and won, but their right to protect children has been called into question by organizations like the NRA, who noted that physicians at Mercy Hospital in 2018 that they should “stay in their lane” and stop asking questions about guns in the home. Days later, a shooter entered that same hospital and injured three people.

There is much to be done. And obviously, the time is now.

More Like This
Can States Ban The Abortion Pill? FDA Rules May Make That Hard
Here’s How To Fight For Abortion Rights
Ketanji Brown Jackson Spoke Directly To Her Daughters In Her Powerful Opening Statement
AAP Says Kids Will Face "Grave Consequences" Now That Roe V. Wade Is Overturned