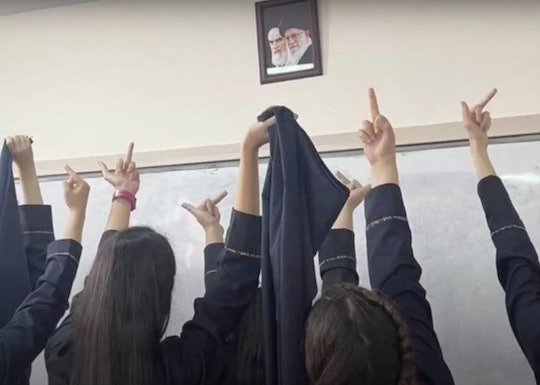 As anti-government protests continue in Iran in the wake of the death of 22-year-old Mahsa Amini, schoolgirls have begun to take off their hijabs in solidarity across the country and moving videos of their acts of resistance have gone viral on social media.

On Sep. 13, 22-year-old Amini was detained by Iran’s morality police in Tehran, reportedly for wearing her hijab “inappropriately” at the time. Amini was allegedly beaten and tortured while in custody and died three days later after being moved to the intensive care unit of Kasra Hospital in Tehran. The official cause of her death was reported to be a heart attack, but Amini’s family vigorously disputed that claim by Iranian officials, the BBC reports.

Amini’s death sparked widespread protests in Iran, and in recent days schoolgirls across the country have joined. Unprecedented footage posted on social media show schoolgirls in cities like Tehran, Karaj, Shiraz, and beyond removing their hijabs and shouting messages like “shame on you” and “death to the dictator” (in reference to Iran’s Supreme Leader, Ayatollah Ali Khameni). One such video shows schoolgirls in Karaj, a city just west of Tehran, shouting, “If we don’t unite, they will kill us one by one,” as they march through the streets carrying their hijabs in their hands.

The danger of removing their hijabs in public is no small thing for these schoolgirls in Iran. Mohammad Rostami Cheshmeh Gachi, head of Iran’s morality police, announced earlier this year that women who did not wear their hijabs would be punished. Since the outset of the protests in mid-September, more than 130 people have reportedly died at the hands of security forces attempting to quell protesters, according to Human Rights Watch. And yet schoolgirls across the country are not only removing their hijabs, but reportedly chasing Iranian officials off their school grounds by chanting “shame on you” in unison.

Rana Rahimpour, the BBC’s Iran specialist, shared a photo of young students giving the middle finger to a message written on a chalkboard on Twitter, writing, “After almost three weeks of protests, it is clear that #Iran's leadership is facing a serious challenge. Its opponents are no longer just politicians or people in their 20s. It is now facing teenagers - schoolgirls who are not scared of burning photos of the supreme leader.”

Rahimpour went on to note, “The protests have continued despite SL's warning on Monday that they were ‘riots’ orchestrated by the West. Many of those taking part simply want a normal life. They might not understand politics, but they understand that they are not free.”

Vahid Yücesoy, a PhD candidate in political science at the University of Montreal, shared the viral video and told Newsweek that these protests are “unprecedented” for high school students in Iran. “Typically, when protests occur in Iran, they usually are restricted to streets or university campuses or they are led by workers or teachers. The fact that they have now arrived at high schools is a very unprecedented development,” Yücesoy told the outlet. “The discontent with the regime is so high, all segments of society are indignant with the way that things are going in the country that we're seeing even young high school girls acting in a very political manner.”

As protesters gather in solidarity with Iran in countries around the world, the courage of these schoolgirls in Iran cannot be overstated. If you want to help the women of Iran, consider making a donation to the Abdorrahman Boroumond Center (Human Rights for Iran), the Center for Human Rights in Iran, and Amnesty International as well as sign the petition to investigate human rights’ violations in Iran.