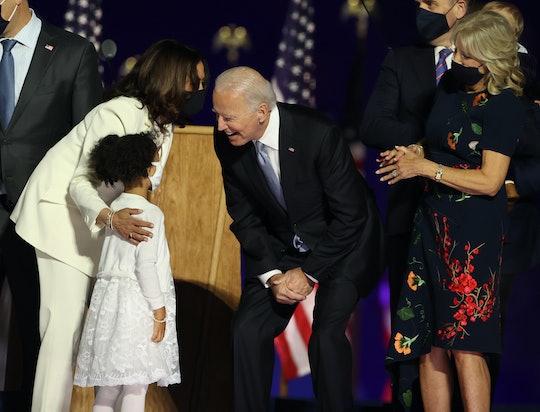 Finally, A President I Can Allow My Children To Listen To

I've never let my twin girls tune in to a Trump speech.

Early one morning last week, I let the dog out and sat down to turn on CNN. A moment later, my 8-year-old daughter, rubbing the sleep from her eyes, asked, “Did Joe Biden win yet?” I said, “No, baby. They’re still counting.” Neither she nor her twin sister have ever really listened to President Trump speak. I wouldn’t allow it because I never knew what mean or hateful things he would say. But the residue of his actions sparked many teaching moments in our family: like how to show empathy, how to be kind and honest, and the meaning of “equality” and “democracy.” My girls know he doesn’t represent any of the traits we value. How could I teach them kindness, then turn around and let them listen to a man who mocks disabled people (and that’s just for starters)? So yes, they anxiously wanted Joe Biden to win, and they could fully articulate why.

“Mommy I really want Joe Biden to win this.”

“Why? When you get older and are able to vote, you need to know why you are choosing that person. So tell me your reasons.”

“Well, he worked with Barack Obama and he’s nice and wants to help the country. And Trump is mean and he doesn’t tell the truth.”

And for her age, that’s enough.

When Trump won the election in 2016, my children were 4, and I lost all pride and trust in our country’s leadership. I’ve spent so many days in disbelief that our nation has sunk so low and become so polarized. A shift happened when Trump took office that made so many of us hold onto the idea of freedom a little tighter because it felt threatened. He was a mirror that reflected the ugliest parts of this country, and he amplified the racism that many people kept buried in their closets.

The unexpected part is seeing what relief looks like on a child’s face.

For days after election day last week I hung on edge watching voting numbers until my eyes turned red, and my body forced me to sleep, only to wake up early the next morning to see if there had been any changes. The first night my stomach literally ached when I saw all the states that turned red in Trump's favor. Call me naïve, but I didn’t think the presidential race would be this close, which probably speaks to my hope in humanity. I just knew that Americans would overwhelmingly want better after the chaos and confusion we have had to endure. He was not the example that any of our children should see. Every day they asked why we didn’t know who had won yet and I gave the same answer. “They’re still counting,” always with a lump in my throat, not knowing what would happen.

Late Saturday morning I was chatting on my cell phone with a friend and piddling around the house while my husband took a nap and the kids played video games. For the first time in days I didn’t have the TV on. My friend yelled into the phone, “BIDEN WON PENNSYLVANIA! HE WON!” I turned on CNN and swung open our bedroom door, “Babe, get up. You’re gonna wanna see this!” My girls saw how hyper I was and they sprinted through the house to follow us. When Biden and Harris were announced as the President and Madam Vice President-elect, they screamed as loud as we did, and they danced just as hard. The unexpected part is seeing what relief looks like on a child’s face. I know they can’t comprehend the depth of what this turnout means, but they know enough to realize the weight of its importance. And for me, that’s heavy.

“It’s easier to be a parent this morning,” replied CNN’s Van Jones when Anderson Cooper asked his thoughts on Biden being elected. His words spoke to the burden I’d carried the past four years; he spoke for so many parents like me. “It’s easier to be a dad. It’s easier to tell your kids character matters. It matters. Telling the truth matters. Being a good person matters. And it’s easier for a whole lot of people. If you’re a Muslim in this country, you don’t have to worry if the president doesn’t want you here. If you’re an immigrant, you don’t have to worry if the president’s going to be happier to have babies snatched away or send dreamers back for no reason. It’s vindication for a lot of people who have really suffered. You know the ‘I can’t breathe?’ That wasn’t just George Floyd. That was a lot of people that felt that they couldn’t breathe.”

This moment in history shows my children how much their voice matters.

Seeing this change in leadership, I can finally breathe. I can exhale four years-worth of worry, fear, disappointment, and frustration. Our country has a chance to heal, and our children can see a president who wants to recover “the soul of America.” The Black community will have a president who openly acknowledges that there is institutional racism and plans to have a diverse government and has said, “Across the board – from our classrooms to our courtrooms to the president’s Cabinet – we have to make sure that our leadership and our institutions actually look like America.”

And here we are. Our new VP is a Black and Indian woman, and Biden promises to continue diversifying our government so my children and other minorities will see leadership that looks like them. This moment in history shows my children how much their voice matters, that the glass ceiling for women has been smashed, and that people can unite and do good things together even when it’s hard.

For the first time in years, I had zero apprehensions about letting them sit next to us and listen to a Presidential speech. Saturday evening, as a family, we snuggled up with pride and smiled when the Democratic campaign’s official acceptance speech in Delaware began with Kamala Harris walking out to a Mary J. Blige song that speaks to little Black girls like mine:

Just because the length of your hair ain’t that long

And they might criticize you for your skin tone

Wanna hold your head high cause you’re a pretty woman

Get your runway stride on and you keep going

More Like This
Dr. Jill Biden Just Delivered Some Frank, But Powerful, Advice On Motherhood
13-Year-Old Makes History As Youngest Black Person To Be Accepted Into Medical School
Breonna Taylor's Mom Spoke Out About The Four Officers Arrested In Her Daughter’s Death
New York Can End Religious Exemptions to Vaccine Mandates, Says A Federal Appeals Court