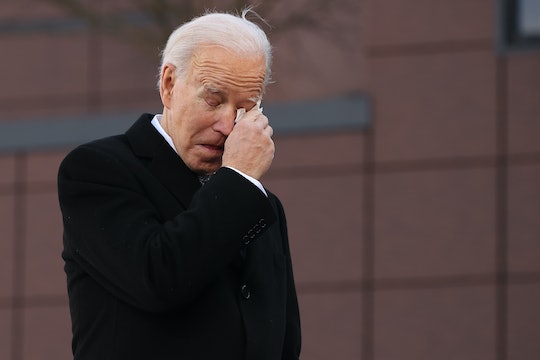 "We should be introducing him as president."

The day before the inauguration was a big, emotional day for Joe Biden, the 46th President of the United States. He was leaving his home state, heading off to Washington, D.C. to be sworn in. The entire world has been waiting for this moment, the entire world is watching. But he is still a father who lost his beloved son, and Biden's tearful tribute to son Beau honored the love he still carries for the man he believes should be standing in his shoes this very day. The son he feels should have been president.

Biden gave a speech on Tuesday, Jan. 19, at the Major Joseph R. "Beau" Biden, III National Guard Reserve Center in New Castle, Delaware ahead of his departure to the capital. The center was named after his son Beau Biden, who died of brain cancer in 2015 when he was just 46 years old.

Now that he has been elected president, Biden is still thinking about the son he lost. In his speech he gave a lovely tribute to Beau, saying, "I am proud. Proud, proud, proud to be a son of Delaware. And I'm even more proud to be standing here doing this from Major Beau Biden. I only have one regret. That he's not here. Because we should be introducing him as president."

Beau Biden was the Attorney General for the state of Delaware, father to daughter Natalie and son Robert, and incredibly close to his dad. Before meeting his second wife, First Lady Dr. Jill Biden, Biden raised Beau and his brother Hunter on his own after their mother and baby sister Naomi died in a car crash in 1972. As an adult, Beau Biden was one of his dad's greatest advocates, as he told 60 Minutes in an interview in 2015 saying, "Beau all along thought that I should run and I could win."

As President Biden campaigned during the enormously contentious 2020 election, he often thought of his son Beau. And hoped he was doing him proud. He told MSNBC's Morning Joe last January, "Beau should be the one running for president, not me. Every morning I get up Joe, not a joke, and I think to myself, 'Is he proud of me?'"

On Inauguration Day, President Biden is seen by millions of people as a beacon of hope after four years of turmoil and division in the country. It seems certain that he is, indeed, making his son proud.