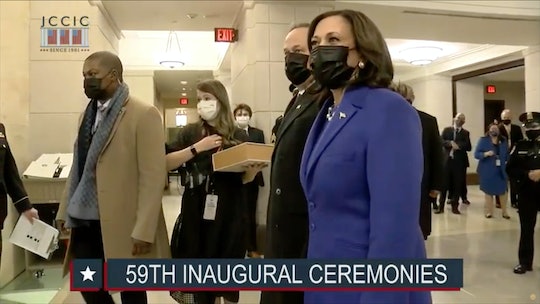 He diverted mob from Senate floor.

It's been two weeks since he was labeled a national hero for diverting a mob from entering the Senate floor. Two weeks later, Eugene Goodman, the hero cop from Capitol riots, escorted Vice President Kamala Harris on Inauguration Day. If ever there was a symbol for how much can change in such a short period of time, this is it.

Two weeks ago, on Jan. 6, Officer Goodman was on duty at the Capitol building. Protecting politicians who were at that moment in the Senate chamber as Vice President Mike Pence went about the ceremonial counting of the 2020 electoral votes that would finally certify incoming President Joe Biden. As Pence was doing his duty, a violent mob of Trump supporters descended on the Capitol building, gaining entry with weapons as people were evacuated. Video from that harrowing day emerged showing Goodman diverting the mob from the Senate chambers, standing alone against dozens of screaming rioters as he went above and beyond in his duty as a Capitol police officer.

On Jan. 20, Goodman had the honor of performing a different kind of duty. As the now acting deputy Senate sergeant-at-arms, he was part of the security detail protecting Vice President Harris on Inauguration Day. Ensuring she could be safely sworn in as the first woman of color to ever hold the second highest office in the country.

Social media users noted the significance of Goodman's role in Harris' inauguration, with one person writing that the crowd cheered when they saw him, "The crowd cheering for Eugene Goodman was nice and deserved. I do hope that man gets a day off soon."

Colorado Rep. Jason Crow, who himself made the news after a photo from the Capitol riots showed him comforting a fellow representative as they sheltered in place during the insurrection, tweeted that Goodman received his own standing ovation during the inauguration, "The man who saved the Senate. Standing ovation and cheers for a true hero, Officer Eugene Goodman."

The sight of Officer Eugene Goodman protecting Vice President Harris just two weeks after the Capitol riots is perhaps one of the most symbolic of the new Biden/Harris era. Hopefully, a sign of more peaceful, unified times to come.